How to identify causality, stability and ROC from the pole-zero plot?

To preface, this is not a homework related question but purely for self-study purposes.

If I am given the following Pole-Zero Plot: (Source: Berkeley Exam1)

I know that for stability, the ROC must include the unit circle. And for causality, $h[n]=0$ for $ n<0$. Other than that, I am having trouble applying those rules to a pole-zero plot. 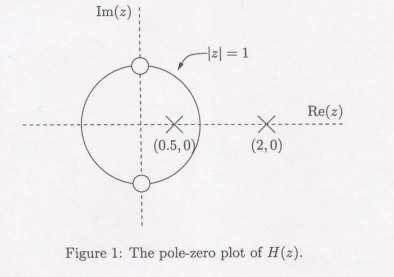 For systems with more than one pole (with different radii), there are $3$ types of ROCs:

In your example you have case $3$ above, because that's the only ROC that includes the unit circle, and, consequently, corresponds to a stable system. Both other possible ROCs (inside the circle with radius $0.5$ and outside the circle with radius $2$) do not include the unit circle, and, consequently, do not correspond to impulse responses of stable systems. Since a ROC equal to a ring between two poles corresponds to a two-sided sequence, the system can't be causal. A causal system has a ROC outside a circle (case $2$ in the list above).

5
Identifying the magnitude and impulse response from pole zero plot quickly
2
System characterization given pole-zero mapping
1
Is the following system stable and causal?
8
Physical Meaning of Negative Group Delay for causal LTI systems
0
What happens when the poles of this z-transform function are outside the ROC for a signal?
0
Determining asymptotic stability using transfer function?
1
Causality of z-transform $a^nu[n+1]$
5
What are the properties of continuous-time improper systems?
2
On the stability and causality of a discrete system
0
Determine causality and stability from given filter structure