When doing a Hilbert-transformation, why not simply multiplying by an exponential?

In contrast to Jason R's answer I claim that the Hilbert transform is a phase shift by $-\pi/2$ for real-valued signals. By definition, a phase shifter shifts the phase of a sinusoidal signal by some given phase $\phi$:

it is clear that in order for the signal $x(t)$ to experience a phase shift by $\phi$, the positive frequencies need to be shifted by $\phi$ and the negative frequencies by $-\phi$. For $\phi=-\pi/2$ that's exactly what a Hilbert transformer does.

A constant transfer function like $H(f)=e^{-j\pi/2}=-j$ doesn't really do much apart from scaling the input signal, in this case by the imaginary unit. So the signal $x(t)=\cos(\omega_0t)$ is "transformed" into $y(t)=-j\cos(\omega_0t)$. Of course, for the special case of the complex-valued input signal $x(t)=e^{j\omega_0t}$ multiplication by $-j$ achieves a phase shift by $-\pi/2$, but usually we want to shift the phase of real-valued signals, and in that case we need a frequency-dependent transfer function.

The Hilbert operator is a very central operator in harmonic analysis. It is devoted Chapter 2 (The Central Idea: The Hilbert Transform) in Explorations in Harmonic Analysis with Applications to Complex Function Theory and two whole books by King, Hilbert transforms.

Its properties thus reach far beyond a mere phase-shift, and beyond what I can understand. The Hilbert transform yields reciprocal Hilbert pairs. One misleading impression is caused by the fact that sine and cosine are (up to a sign) Hilbert pairs, and together form the most important analytic signal: 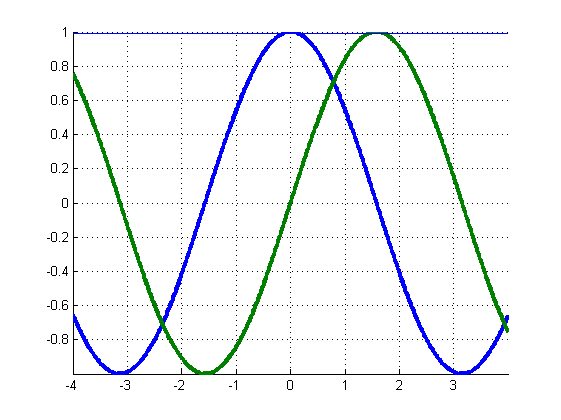 The dotted line is the envelope of the analytic signal. Here, the "intuitive idea" behind the phase shift is apparent. But if you observe other Hilbert pairs, you can see a whole different picture. For a Cauchy function: 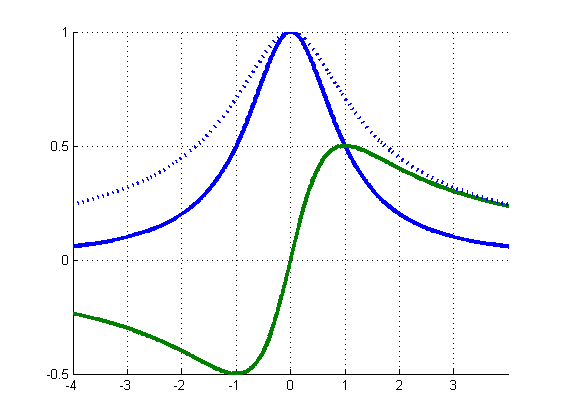 For the cardinal sine: 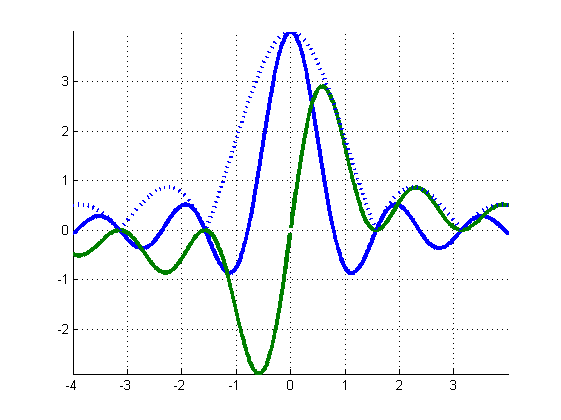 and for a rectangular window: 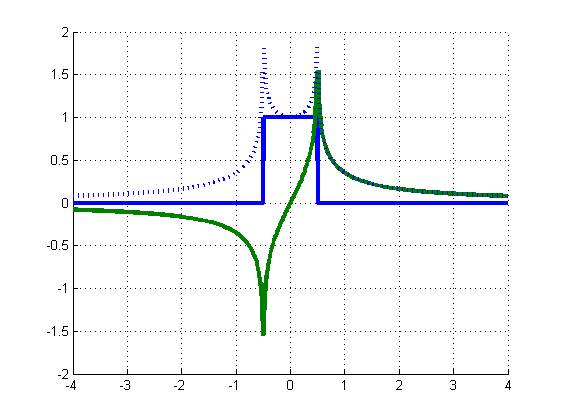 I am still amazed that so different-looking function have the same amplitude spectrum, especially for the last one. It is easy to see that simple operations on phase in the frequency domain lead to not intuitive time behavior. One way to remember that is that if a function is symmetric (even), its Hilbert pair is antisymmetric (odd), and vice-versa.

The question has already an answer. I just think a small clarification would be nice regarding the interpretation of phase shift in the answer provided by @MattL.

Consider a square wave signal over a period equal to $L$. By looking at one of the other answers (From @LaurentDuval, the last plot) one can see how should the actual shape of the Hilbert transform of one rectangular pulse look like. Now the term phase shift does not apply to such signal since it is not sinusoidal (although sometimes is misused for its time-delayed versions). But how can we see that Hilbert transform actually shifts the phase, especially when we deal with a non-sinusoidal signal such as a square wave?

The answer is easy. Since phase shift only applies to sinusoidal signals, then we should express the general signal in terms of sinusoidal signals and shift them one-by-one. This can be done using the Fourier series representation of the signal.

In the figure below, I have plotted the two signals based on the first $50$ terms of their Fourier Series, which shows $f_{\text{HT}}$ is what we were expecting.

Not the answer you're looking for? Browse other questions tagged transform hilbert-transform or ask your own question.