I have been trying to figure out how it is I have an IIR filter with large negative group delay. It's my understanding that if a filter is causal and stable, the group delay can't be negative at all frequencies. Is this correct?

The essence of my problem can be seen in the following MATLAB code. This first filter gives four poles inside the unit circle and four zeros at zero. The group delay is both positive and negative with a mean of zero. I believe the contribution of each pole and zero adds and negates one sample of average group delay, respectively.

I briefly glanced at the code for grpdelay but did not make a serious attempt to understand it. Also, if you flip this around and use an FIR filter, changing the last coefficient to complex does not change the average group delay contribution by each zero.

This is a bug, either in your code, or in your version of the Matlab function grpdelay. As you correctly pointed out, making the last denominator coefficient imaginary just rotates the pole-zero diagram. This means that for the given example, the zeros stay where they were (in the origin), and the pole angles are rotated by $\pi/8$; or course, the pole radii remain unchanged.

For the group delay function this means that it only gets shifted (along the frequency axis), but its maximum and minimum values (and its overall shape) must remain the same.

Using Octave I get the expected result: 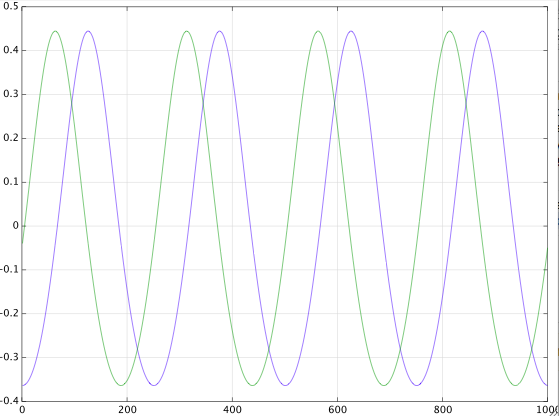 Not the answer you're looking for? Browse other questions tagged matlab group-delay or ask your own question.