MFSK vs FSK: Why BER decreases increasing the symbols

My question is related to the performance of 2-FSK modulation scheme against M-FSK (M > 2). From the SNR vs BER curve it seems that as the number of tones (frequencies) increases the BER decrease for the same SNR compared to 2-FSK(pics attached). (I assume maintaining the same symbol duration) 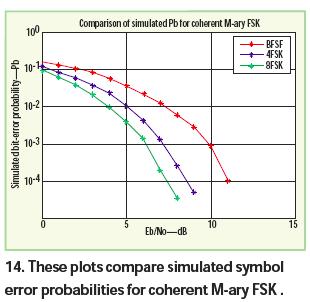 As the number of tones increases the bandwidth increases but i can't figure out why the performance of MFSK also increases. At first glance i would say that the resilience to the noise should be the same as the 2-FSK.

Which is the benefit of using 2-FSK instead of M-FSK (M>2) given a fixed available bandwidth?

nope! That is usually not the case, because it would be unfair – if you send the same number of symbols per second, you'd get twice as many bits per second using 4-FSK rather than 2-FSK.

Therefore, the comparison is typically done with identical Bit Energy rather than identical Symbol duration (which would be, for constant envelope signals, be equal to identical symbol energy).

Hence, with higher modulation order, you get less symbols per bit, and hence, for constant $E_b$ more $E_{sym}$.

Now, errors happen on a symbol level – and a Symbol Error Rate of $r$ doesn't imply a BER of $r$ – in fact, a wrong symbol has at most its worth in bits in wrong bits, but usually less (see: Gray code), so $\text{BER}\le\text{SER}$ generally holds, and one can in an uncorrelated noise scenario be almost certain that $\text{BER}<\text{SER}$.

Not the answer you're looking for? Browse other questions tagged digital-communications fsk or ask your own question.

1
How to determine the symbol rate of a 2-FSK signal?
2
Value of power spectral density $N_0$ or effect of scaling bandwidth to SNR
0
Why are the mark and space tones of these FSK signals reversed?
0
Find the ber for the cdma protocol
0
Why in FSK the phase shift is allowed?
1
Estimating the SNR of 2-FSK