I would like to know can anyone suggest me techniques to estimate the SNR for a given noisy signal. I do not know the amplitude of my signal but I do know that noise is Gaussian.

However, this technique seems to work well when I have sinusoidal signal and fails easily when I just have a noisy signal and do not know the nature of the signal since I do not know what peaks in FFT corresponds to my signal and how many of them.

A common technique relies on filter banks and robust statistics. The idea is to isolate some frequency subbands where the transformed signal is sparse, and the rest is (filtered) noise. From here, you can use a median estimator.

In the context of orthogonal wavelets (a form of dyadic filter banks), if the signal is sufficiently sampled, the highest frequency subband often satisfies the above requirements. Or one can choose a suitable union of subbands where the signal is considered sparse.

Then, if $c_i$ denote the subband coefficients, an estimator of the Gaussian noise variance $\sigma$ is:

The following picture displays the average noise estimation, with standard deviation, from several realizations of a Gaussian noise added to a line of an image. 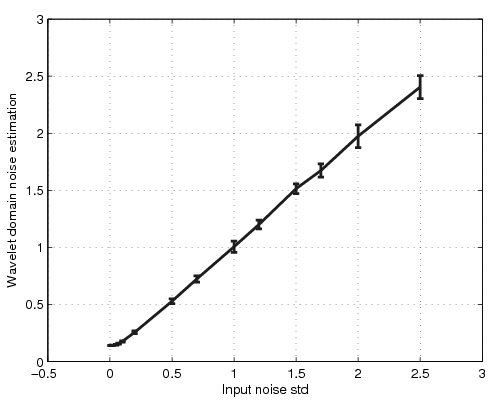 This is described in Penalized threshold for wavelet 1-D or 2-D de-noising. More details are given in S. Mallat, A wavelet tour of signal processing, section 11.3 Thresholding Sparse Representations, Noise Variance Estimation. The denominator factor is discussed in Rousseeuw and Croux, Alternatives to median absolute deviation, 1993.

A very basic avatar consists in differentiating the data with the basic $[1,-1]$ finite difference, and using the above estimator, further divided by $\sqrt{2}$ to account for its energy normalization.

As far as I understand, you have a random signal + Gaussian noise, and you want to calculate the SNR. SNR estimation methods, fall into two groups, 1)data-aided and 2)blind methods. The data-aided methods transmit a pilot data (known or predefined signal) from a channel and based on degree of corruption of the received signal estimate the SNR, blind techniques are a bit more complex and usually are not general and are specialized to different signals (for example Speech SNRAnother are only for speech, or OFDM SNR is only for OFDM signal. Depending on nature of you signal you can find the most appropriate blind SNR estimator, for you case.

Not the answer you're looking for? Browse other questions tagged fft discrete-signals noise estimation snr or ask your own question.

4
Minimum SNR Requirements for Maximum Likelihood Frequency Estimation
0
Confusion about how to calculate signal to noise ratio(SNR)?
4
Time delay estimation in low SNR
2
Gaussian noise generation for a given SNR ?
0
SNR in one-dimensional additive channel with uniform noise and binary antipodal input
0
How to calculate SNR with sample noise and noisy signal only
0
Correct comparison of FFT noise with FFT signal
0
Speech SNR estimation
0
How to verify the obtained SNR of the noisy signal after adding noise?
0
How to extract noise from a signal in order to get both noise power and signal power