Now, If we zeropad the middle of the spectrum (e.g: when upsampling) such that its new size will be M, we obtain a new one as follows. $X$ is the small spectrum. $Y$ is the zero padded larger spectrum.

In the above, I skipped the middle bin ($X_{N/2}$) because it is not yet clear whether it should assigned to the positive or negative section of the new signal.

Further testing revealed that indeed, we can split the value of the middlebin however we want, as long as their sums match the original value. Yet, the interpolations between the samples (when converting $Y$ back to the timedomain) oscillates differently for each particular choice.

The following three images show the effect of the middle bin on the phase of the upsampled signal. The first one places the middle-bin at N/2 in the new spectrum. The second image splits the content over bin N/2 and M-N/2 and the last one maps the middle bin solely to M-N/2 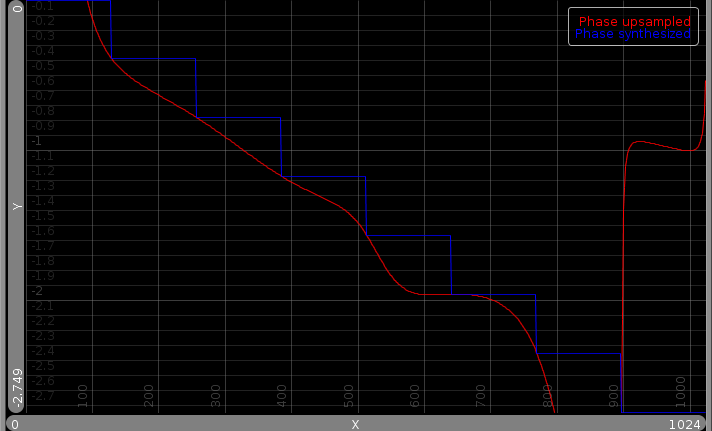 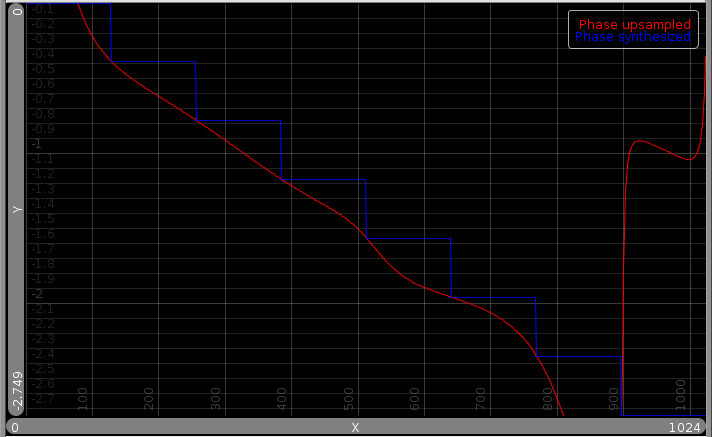 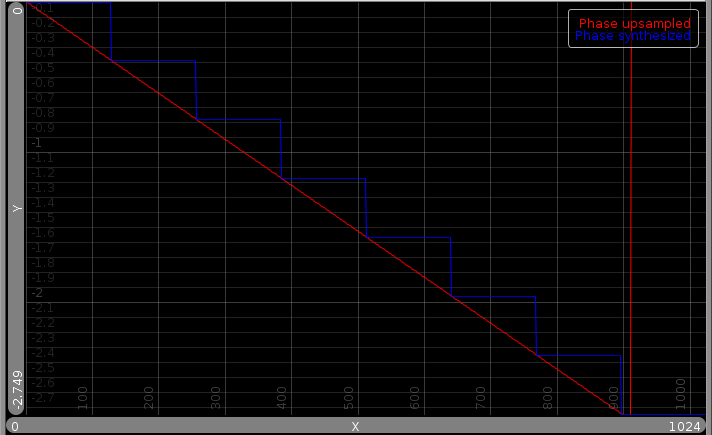 Is there any rule-of-thumb (and why), or any argument/standard practice on how to split the value of the middle bin when zero padding ?

One potential issue here is that you are technically in violation of the sampling theorem. Having non-trivial energy at Nyquist is typically an indication that the signal wasn't sufficiently low pass filtered before being sampled. So chances are you already have aliasing. If the Nyquist energy is low enough, it doesn't matter how you split it.

Zero padding past Nyquist to upsample introduces a frequency domain "brick wall" filter between Nyquist and Nyquist + 1. You can certainly go through with the mathematical procedure but I would not expect this to closely match the behavior of the original signal.

The Nyquist frequencies $\pi$ and $-\pi$ are the same in the DFT (e.g., if you think of the DFT as a filter bank, the filters for these frequencies are identical). Without more information about the signal (namely its exact bandwidth and center frequency), you can't say which method is correct. However, a common practice is to split the Nyquist bin in half when upsampling in order to preserve the spectral symmetry of real-valued signals. That way the upsampled version of a real signal is also a real signal.

20
Frequency-domain zero padding - special treatment of X[N/2]
4
Why to pad zeros at the middle of sequence instead at the end of the sequence?
8
The Proper Way to Do Sinc Downsampling (DFT Downsampling) for Uniformly Sampled Discrete Signals with Finite Number of Samples
13
Real-valued ringing when zero-padding odd-length FFT