This is the mathematical expression for Harris corner detection:

But I have the following doubts:

I am finding it confusing to grasp the mathematical explanation. Anyone has an idea?

The meaning of that formula is really quite simple. Imagine you take two same-sized small areas of an image, the blue one and the red one:

Next you calculate the sum of squared difference between the image parts marked red and blue, i.e. you subtract them pixel by pixel, square the difference and sum up the result (assuming, for simplicity that the window = 1 in the area we're looking at). This gives you one number for every possible (u,v) -> E(u,v).

Let's see what happens if we calculate that for different values of u/v:

The plot looks similar, but the sum of squared differences between the two image parts is a lot smaller when you shift the blue rectangle in the direction of the edge. 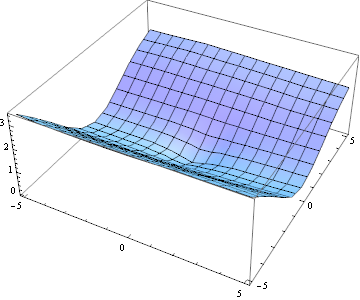 The plot looks a bit like a "canyon": There's only a small difference if you shift the image in the direction of the canyon. That's because this image patch has a dominant (vertical) orientation.

We can do the same for a different image patch: 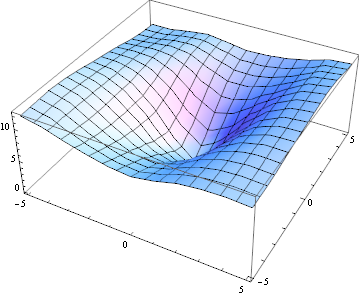 No matter which way you shift the patch, it always looks different.

So the shape of the function E(u,v) tells us something about the image patch

Many references say it is the magnitude by which the window 'w' shifted...so how much is the window shifted?one pixel...two pixels?

Normally, you don't calculate E(u,v) at all. You're only interested in the shape of it in the neighborhood of (u,v)=(0,0). So you just want the Taylor expansion of E(u,v) near (0,0), which completely describes the "shape" of it.

Is the summation over the pixel positions covered by the window?

Mathematically speaking, it's more elegant to let the summation range over all pixels. Practically speaking there's no point in summing pixels where the window is 0.

Not the answer you're looking for? Browse other questions tagged image-processing opencv linear-algebra or ask your own question.

4
why eigenvalues concerned in Harris corner detection?
3
How does image masking work?
1
In Plain English, What Are the Within and Between Class Variances in Otsu's Thresholding?
2
What is Gamma correction - is my beginner's interpretation right?
0
Local Histogram Processing clarification
0
Harris corner detection shape of $E(u,v)$