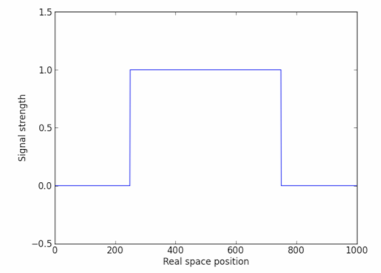 I ultimately want to calculate the spatial width of this signal using FFTs. Of course we know the width here to be $500$; in actuality, I am dealing with a signal that evolves with time and wish to calculate the average "pulse" width over all the time frames, so I do not know the widths. I have opted to use FFTs in this pursuit, so I must conduct a "sanity check" to make sure the method works. This method was suggested to me by a colleague whose intuition is many leagues farther than my own, so if someone could explain the intuition to me, I would appreciate it a lot. 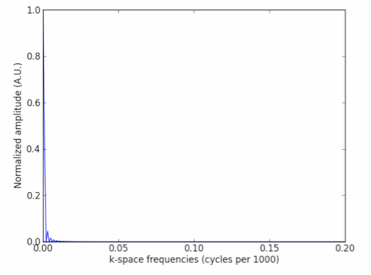 I ultimately want to calculate the spatial width of this signal using FFTs.

I am dealing with a signal that evolves with time and wish to calculate the average "pulse" width over all the time frames, so I do not know the widths.

If there will be multiple pulses of different widths on the same signal, then by opting to detect them with the FFT you are setting yourself a very big challenge because the FFT would return to you information about the signal as a whole. So you could, for example, derive an average rate of pulses (even using the algorithm that is presented here) but not the widths of individual pulses.

If it is somehow guaranteed that within a window of 1000 samples, there will be a pulse whose length is guaranteed to be staying well below 1000 samples and all we have to do now is detect where the pulse is and how long it is, then opting for the FFT is an overkill.

If you absolutely have to work in the frequency domain, it might be better to look into the discrete wavelet transform (DWT), whose output is a time/scale(frequency) representation. But the actual detection of the pulse width is likely to be happening (again) using some form of threhsolding on the output of the DWT. (So, again, huge overkill).

Step 1 already solves your problem: If your only states are 0 and 1, and you get a mean of $0\le a\le 1$, then $a$ is the fraction of time your pulse was "on". You can very often reduce more complex problems to a threshholding problem that is exactly this one.

Step 2: Take the FFT of the signal, then the power (the Fourier transform times the complex conjugate of it).

Redundant; when calculating the Mean in the first step, you could have already summed up the sample sqaures and thus gotten the power; and Parsevals theorem states that power in time and frequency domain are equivalent.

which is the same operation, but on a less "clearly" bounded waveform, as "counting" the width of your pulse in the original time signal.

so all in all, you're really not after spectral properties of your signal; I don't see how applying the DFT helps here.

If you want so, first consider the square wave, of which we know the spectrum very well. Now apply the theorem of time-scaling to the Fourier transform, and you'll get a function describing non-unit-periodic square waves. Multiply with a rectangular window (convolve with a sinc in frequency domain), and you'll see that no matter what you're doing, you're not making the original problem easier to distinguish; you'd still be down to counting the zero-passes or edges of the spectrum, and that's not easier or more accurate than doing that in the time domain.

What one could argue is that you inherently, and unknowingly, while simply claiming you'd get the "half-width half-maximum" "just by looking at it" built a specific filter. And in fact, as hinted at in the very beginning, that's your easiest solution:

A "mean value" will give you the percentage of time your signal was 1; also, an average is nothing but a long FIR with constant taps. So, yeah, build a very low-pass filter, and you shall be done.

You're not really telling us how your overall waveform looks like, but it's thoroughly possible the opposite of the low-pass approach would be a good thing, too: Just use a very high-pass filter to only see the rising/falling edge of your pulse, and simple count the length between these two.

Not the answer you're looking for? Browse other questions tagged fft power-spectral-density spatial or ask your own question.

3
Power spectrum estimate from FFT
0
Calculating the SNR from the power spectrum. Is my suggestion relevant?
1
How to find PSD (Power spectral density) of spatial data
2
What does PSD represent in the spatial domain?
1
Method for calculating musical note-based magnitude spectrum
4
Correct method for processing FFT in realtime
1
FFT shows systematic deviations from analytical result
4
Spectral analysis with high selectivity but low number of points
0
Calculate average from a power spectrum