My question is regarding how one could/should smooth a rather noisy power spectrum obtained from measurements. There are various methods one can use (a moving average, binning, etc) and I am not sure what the correct approach would be, given the situation I will describe.

Although at first sight it might sound like I am asking about what kind of periodogram to use (see for example this question with excellent answers), I think my situation might be a bit different. What I have is a bunch of complex valued autocorrelation functions (ACF): $n$ datasets of length $m = 8192$, centered at $t = 0$, taken with a sampling rate of 1 nanosecond (so 1 GHz sampling rate).

While the specifics are not too relevant to the question, they can also not be changed; the data is obtained using an FPGA that receives a complex value every nanosecond, and it internally calculates the autocorrelation function using a bunch of steps involving DFT's implemented in the binary hardware.

So the data I have I am essentially stuck with. Given this set of ACFs, I'd now like to get their power spectra, which is of course just the Fourier transform. Here is an example: 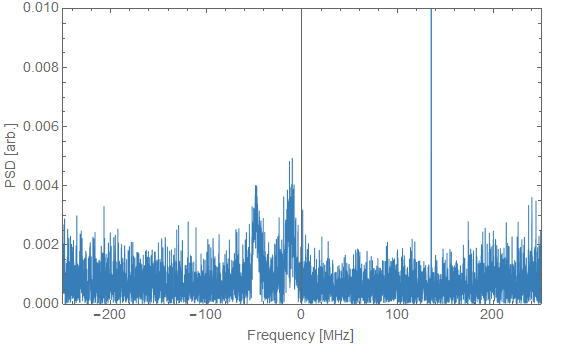 There are a few things to see. First, there are two peaks between -100 and 0 MHz. These are the main objects of interest; they change their width and height in each dataset, and I'd like to integrate them to see how their area changes. As they are now they are rather noisy, and I think they would benefit from smoothing.

The second thing is the major peak between 100 and 200 MHz; this peak is always there (always at the exact same frequency with this resolution), and it should be kept. That means that it shouldn't be smoothed, nor should its neighbours take it into account when smoothing. I suppose one solution is just to take it out, smooth, and put it back in.

Finally there is some noise background that varies from about 0 to 0.002. This I am not interested in; it doesn't have to go away completely, but it should still be flattened out so that I can see it as a sort of static background.

So, taking this all into account, I am looking for some advice on what to do. A simple approach would be binning; splitting the data up into $k$ segments of length $l$ and taking the central moment of each segment as my new dataset. Of course it reduces the number of points. Another alternative is using a moving average, which replaces each datapoint by its r-range average. And then there are a million more smoothing methods; I just don't know what is more suitable.

And I suppose this is the main question. Given that I have a dataset that looks like shown above, with the features I described, how should I go about narrowing down what type of smoothing method is most suited? The main deal, as I mentioned before, is finding the area of the two peaks between -100 and 0. Also making the data look a bit more pleasant is not unimportant. The moving average does all this, but it feels so.. primitive.

For reference, the dataset (as comma seperated values) can be found here. Note that this is already the PSD; the Fourier transform of my original datasets.

Two things: 1) Unless there's some kind of synchronicity between your spectrum analyzer oscillator and the signal source, the spectrum should be fairly symmetrical around 0Hz (except for the AWGN). So I strongly suspect something wrong there, because it isn't symmetrical. 2) Since (I assume) you are getting more than one spectral sweep, for each frequency bin take something like the average of the bin over multiple sweeps. For example, a given frequency bin could be the average of the last several sweeps for that bin, or its an IIR of FIR of the bin history. Do NOT smooth across frequency unless you only have one sweep of data and nothing else.

Not the answer you're looking for? Browse other questions tagged power-spectral-density filtering smoothing or ask your own question.

65
Why so many methods of computing PSD?

5
How to decide whether to use AR or MA for smoothing data?
7
how does this equation correspond to smoothing?
2
RF mask (power spectrum measurement bandwidth)
2
Estimating number for iterations for gaussian smoothing
3
Detecting & Removing steps in signal
6
Issues with the smoothing operator in coherence estimation using the complex Morlet (Gabor) wavelet
0
How to obtain round peaks instead of triangular peaks when smoothing an input?
1
What is the point of smoothing an FFT or spectral density plot, and how does that affect the noise floor?