I'm trying to measure the amplitude of a sinusoidal component in a noisy signal.

Since the signal frequency is known beforehand, I'm calculating scalar product with a sine and cosine base function at the given frequency (see this thread: Measuring amplitude of a spectral component)

Now the problem that I've noticed is that when i'm running the ADC at half speed (312Ksps) I get less noise (less variance over multiple measurements with the input signal being stable, and all other parameters staying the same) than with full speed (625Ksps) - in fact the standard deviation doubles.

I tried to investigate the source of the variance. Since the input signal is very stable (I know this from other measurements), I suspect the variance is coming from out-of-band noise.

I suspect that this is why more noise is picked up (noise as components around the signal with varying amplitude). 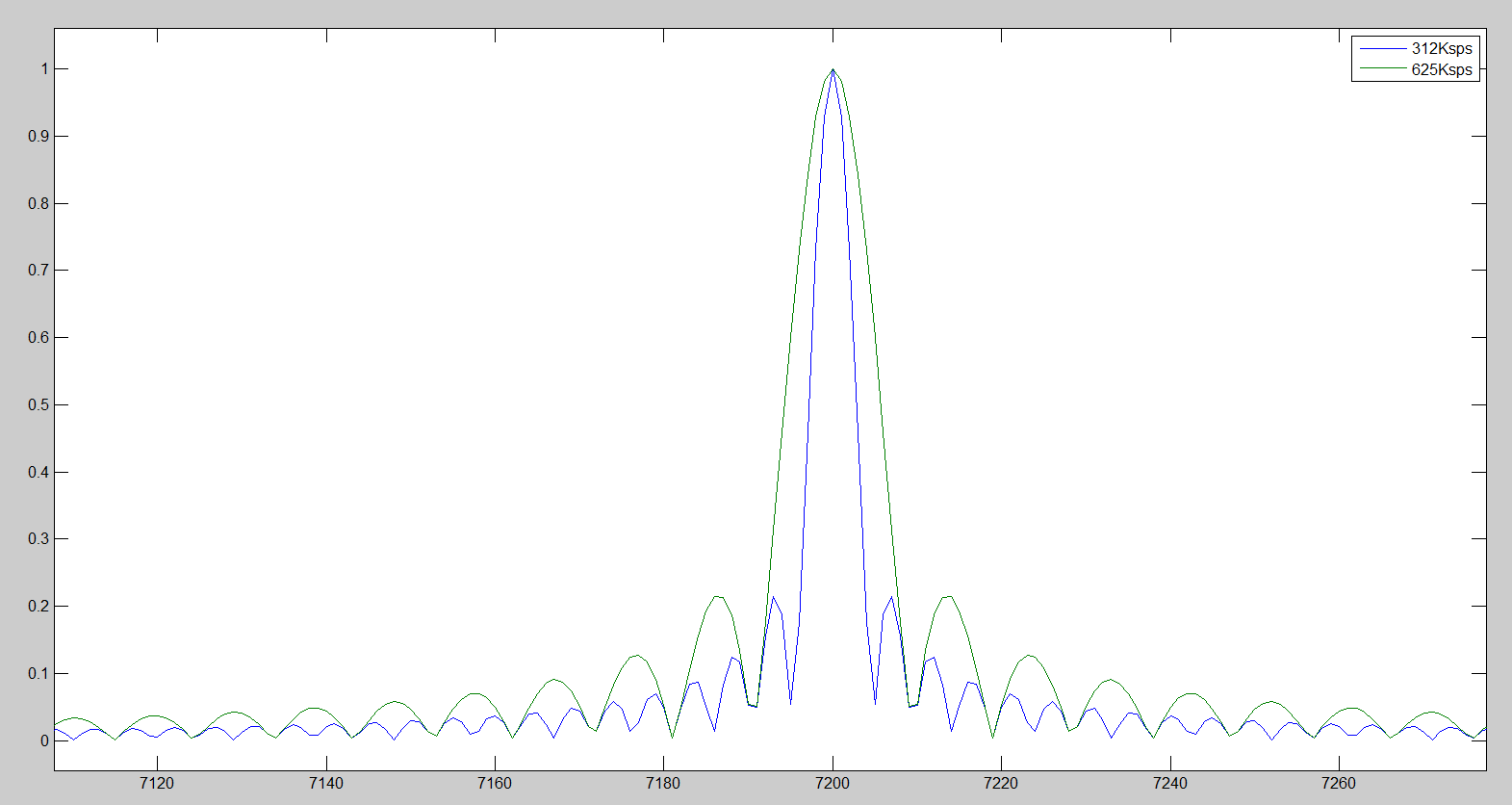 Now I understand that with the same nr. of samples and the lower fs you see more cycles of the singal.

However with the higher fs you see less cycles with more resolution. These should be equivalent right?

How do I get rid of the noise?

Separating two sinusoidal frequencies become easier if the two are completely orthogonal (or nearly so) over some length. A longer FFT will have the frequencies of its orthogonal basis vectors, thus the nulls of adjacent result bins, closer together. A long length of time (more cycles) will approach near orthogonality from other nearby frequency hypothesis better than more samples of a short segment. If you subtract short segments of sinusoids that are much closer together in frequency than the difference between basis vectors of an FFT of that length, you may get a difference waveform that is smaller than some noise level. This can't happen with windows of nearly orthogonal frequency sinusoids unless the magnitude of the noise is of the same order or greater than that of the magnitude than the signal.

Not the answer you're looking for? Browse other questions tagged fft discrete-signals power-spectral-density measurement or ask your own question.

0
Measuring amplitude of a spectral component

8
Standard deviation of spectral flatness — so what am I measuring, conceptually?
5
How to choose FFT depth for ADC performance analysis (SINAD, ENOB)
0
How to find SNR of received DSB:AM signal with white noise after demodulation & LPF'ed?
2
Adding “realistic” noise to signals of different amplitudes
0
Measuring amplitude of a spectral component
2
Adjustment of window length with sliding/moving RMS method for frequency drifts
1
How Does the RMS of White Noise Change with Sampling Frequency?
0
Linear Chirp parameters from a segment of the signal
0
FFT and Power Spectrum Normalization