Radar detection capacity is the capacity to determine the presence or absence of targets whereas the resolution is the capacity to identify two closely separated targets. If you can detect the target separately , you have resolved the targets. If you resolved two targets, you have detected them too. Thus are the detection and resolution tightly bonded if not the same? I think, I am wrong some where and I want to know it.

If you can detect the target separately , you have resolved the targets. If you resolved two targets, you have detected them too.

In general you are totally right, radar can detect targets and in some cases can resolve several closely targets.

Usually they are related, but none of them can completely describe a radar. Also in practice both detection and resolution are obvious features for radars, more important specific values.

For instance, nobody use such data sheet:

Detection: The process of determining the presence of a target.

Detection probability: The probability that a signal, when actually present at the input to the receiver, will be correctly declared a target signal based on observation of the receiver output.

False-alarm probability: The probability that noise or other interfering signals will erroneously cause a target detection decision.

Resolution can be angular, range, frequency, signal-to-clutter, etc. There is no definition of a resolution in general. May be close for resolution is resolution cell.

Resolution cell: The one-dimensional or multidimensional region related to the ability of a radar to resolve multiple targets. The dimensions that involve resolution can include range, angle, and radial velocity (Doppler frequency).

PS. Sorry for my English.

In some radars resolution is more important than detection capability. Consider Synthetic Aperture Radar imaging. If you have 30cm resolution - your tend to be more interested in the intelligence aspect rather than the detection aspect. You don't typically run a detection algorithm on SAR imagery - you might run things like Automatic Target Recognition.

Detection and Resolution are often related. If you have a narrow beamwidth, this increases resolution, but it also increases your antenna gain and provides improved SNR and subsequently affects the detection performance. Same thing happens in the range direction. If you increase the radar pulse bandwidth you increase the pulse resolution, but you also increase the power on the target. Again this will result in a higher received SNR and improved detection performance.

Resolution is (usually) referred to as the ability to distinguish two closely separated returns, not targets.

The distinction is how far along the processing chain of the radar you are, resolution, given by the inverse of the bandwidth is often limited by the hardware (waveform generation, filters, amplifiers, sampling..) and the environment. While Radar detection is done as a further processing to distinguish between what you want to see (targets) and clutter (birds, ground, sea, trees, ..) edit: and is usually limited by the signal to noise/clutter ratio. The detection step will usually contain multiple looks.

You can therefore have say a really good resolution, but since all you see is "noise/clutter", you can't really detect the target you are looking for. Edit: Conversely you may have a really good detection algorithm that uses say excessive averaging and multiple 'looks', but if your resolution is poor, two closely spaced targets may appear as a single target.

Edit: Note that I use noise and clutter interchangeably, as it simply refers to what you don't want to see.

I have attempted to sketch a generic radar system below, the resolution is given by the receiver output, while the detection algorithm will typically use multiple looks (for averaging and doppler discrimination) and use a threshold to alert the user of one or more target. 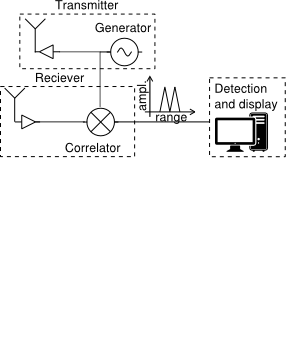 Not the answer you're looking for? Browse other questions tagged detection radar or ask your own question.

3
How to calculate resolution of radar?
4
Radar Pulse Compression Gain (PCR)
0
Deriving the Resolution Equation of an FMCW RADAR
1
CFAR Detectors and Interference
3
Radar signal processing flow chart
0
Coherent detection in radar and radio signals
0
Why does my I/Q data from radar are not centered?
1
Generating IF signal for FMCW radar
1
DOA for bistatic radar