OK, so suppose your transmitted signal is $s(t)$ and the received signal is $r_i(t)$ in continuous (analog) time .

How does the received signal look in analog and digital time domain and also how does the FFT look like?

Do we still perceive only one spike in a particular bin in FFT? Or should you sample appropriately to achieve this?

Once you start talking about 'bins' they we move to discrete-time. In general, unless you are very careful with sampling, it's almost impossible to sample a single sinusoid and achieve a spike in just two bins (positive and negative frequencies). Achieving a spike in just one bin requires a complex exponential which is not really possible with real-world sampling unless you use a specific modulation scheme (which you don't mention).

How does the FFT look if we have two tones?

Again FFT implies discrete time. If you send two tones and sample them, then unless you choose your sampling scheme very cleverly, you will end up with energy in many bins. See this discussion for more details.

he math of this is what I am seeking. Assume baseband audio such as speech.

@Turbo If the signal is baseband audio, then there will never be just a single tone. Speech is generally modelled as an autoregressive (LPC) model driven by either white noise or a periodic pulse train. See figure 2.40 of this reference (screenshot included below for clarity). 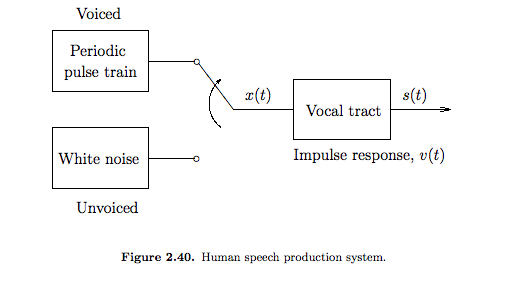 Not the answer you're looking for? Browse other questions tagged fft filters audio fourier-transform frequency-spectrum or ask your own question.

8
Intuition for sidelobes in FFT

7
Common methods of transmitting digital data through an extremely noisy audio signal?
0
FFT doesn't always have frequency in all frames
0
Plotting Spectrum Analysis
1
Preparing audio data for FFT
1
how to calculate the maximum obtainable directivity for a microphone array?
0
Distortion in phase difference measurement using FFT
1
Understanding GCC-PHAT as a Feature
0
How to automatically determine if there is NO seasonality from PSD/FFT of time series?