I have a function that can find the phase difference between two signals, this function uses Hilbert transform to do so. Here is the python code for it

Now I plot the phase difference of this modulated wave and actual carrier wave (Both will be same as I am sending all zeros) with perfect synchronization of both waves, the plot looks like this, which is obvious.

NOTE: I am finding phase difference at each bit (from start to end sample in one bit duration) and plotting against bit number on $x$-axis and phase on $y$-axis. 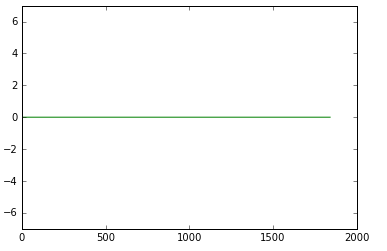 Now let's say if there is some $20$-$30$ samples of miss synchronization between carrier and modulated wave there will be a an offset phase where the plot looks like this. Which is okay that its phase difference is constant through out all bits. 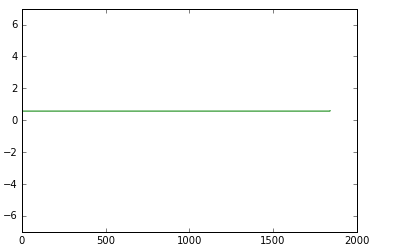 After modulation, when I transmit the sound and record it (Using a good mic). I found that the phase difference plot between the transmitted wave and the recorded wave looks like this,almost a periodic function. 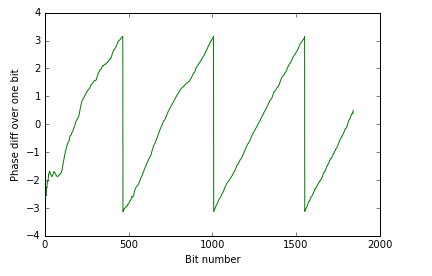 And this one is the same plot, but I have plotted absolute of phase differences. 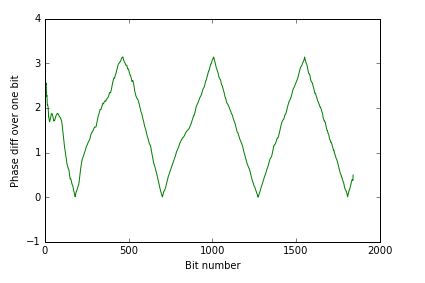 To exactly know the correct sync between recorded and transmitted waves I am using cross correlation techniques which give a correct synchronization correct to $30$ frames(samples). So even if synchronization instant is wrong by $30$ frames (I am having $55$ frames in on bit duration) I should at least get a constant phase plot just like it did on my modulated wave (before transmitting).

As the problem for this is found to be frequency offset between sent and recorded waves.

I am including the frequency spectrum of my sent and recorded wave as shown below. 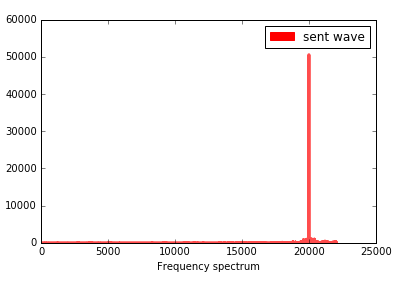 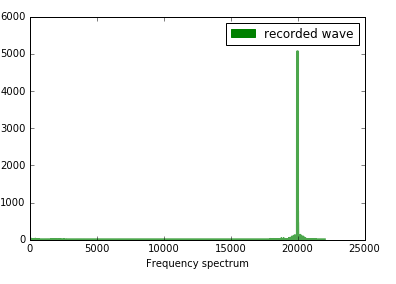 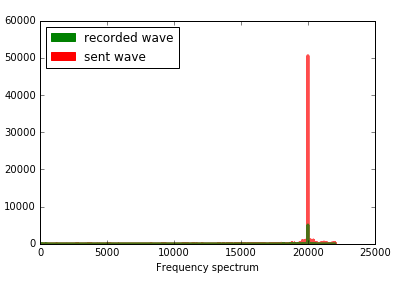 As Matt L said, This is due to the frequency offset between the sent (same as carrier wave as all zeros have been sent) and recorded wave. Which makes the phase difference to keep on increase with time. But as the principal values of phase lie in [-pi,pi] that we get from Hilbert function, we see this to be a periodically varying phase.

To prove that an error in frequency between sent and recorded waves does this, i have made a test on two signals with same phase but with different frequency ( an error of 0.01% ) and plotted the phase difference using Hilbert.

Python Code snippet for the test.

By increasing this frequency error( delta_f ) the periodicity of curve increases

The output plot is as shown. 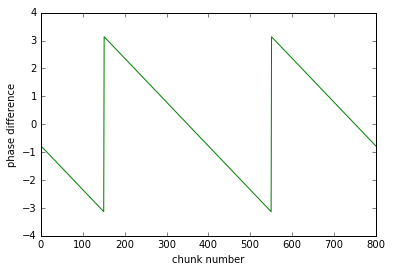 Not the answer you're looking for? Browse other questions tagged digital-communications phase bpsk or ask your own question.

1
How to find frequency and phase shift in the recorded wave( .wav file )

1
How to find the time instant where my sent signal and received signal can synchronize?
0
How to find a know signal in another signal which contains other signals along with the signal i need in python
3
Signals cross-correlation
5
Phase synchronization in BPSK
0
Disparity in phase calculation between STFT and Hilbert transform
1
What does the Phase part of a FFT of a received signal represent?
0
Phase difference between two wave files
0
Phase difference calculation between two wave files