These two filter design methods seem fairly similar. Both ask to determine a frequency response and then take a inverse DFT to get the filter coefficients.

So what's the difference?

The Windowing method for filter design uses samples of the impulse response for the filter coefficients, truncated to the filter length (and then possibly, but not required, tapered by a higher performing window).

Therefore, if you take the IDFT of the sampled frequency response with the number of samples equal to the number of filter coefficients, you are using the Frequency Sampling method. If you take the IDFT of a higher number of samples in the frequency response, and then truncate to your filter length, you are approximating the Windowing method to the extent that the impulse response matches the actual impulse response for your target filter. (For rectangular response filters there is no need to do an IDFT for the Window method; just sample a sinc function since that it easy to calculate and represents the actual impulse response).

(For further description of how the DFT and the DTFT are related see my response to: Sine Wave Aliasing during IFFT)

This is a useful reference as well:

Very simple. Not very effective (except where selective precision is needed).

Coefficients of the FIR filter are the inverse DFT (discrete Fourier Transform) of the sampled frequency response desired. This approach is very simple, but is not very effective for typical filter designs; much longer filter lengths are required over optimized approaches such as least squared and equi-ripple (Remez-exchange) filter design approaches. To be noted, the solution will be exact at the frequency sample locations, with ripple in between. When an application requires an exact solution at discrete frequency locations (and you do not care what happens in between) this can be a practical approach.

Here is a specific example demonstrating the difference between Frequency Sampling and Windowing approach. Consider a target filter design with 99 taps and the following desired response for the normalized frequency range of $[0: N-1] * 2\pi/N$:

For the frequency sampling method, the coefficients of the filter are simply the IFFT of the desired resp (rotated such that the dominant tap is centered in the filter, which would have naturally occurred in the IFFT if we had included the expected filter delay). 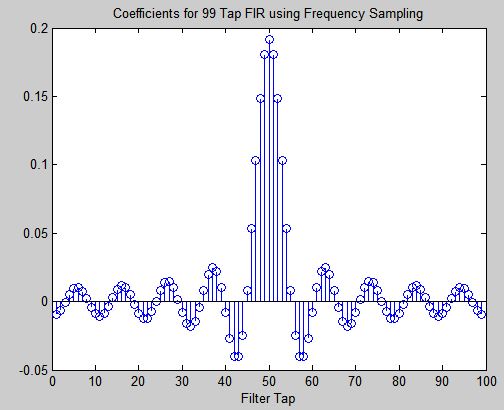 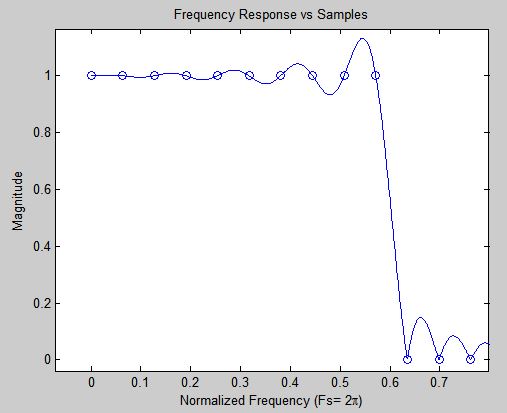 In contrast, the Windowing method uses 99 samples of the actual impulse response. We can approximate this by interpolating our desired frequency response (at a higher sampling rate in frequency, which corresponds to a longer time span in time), or certainly in an exact approach, we can mathematically calculate the impulse response and sample that directly, skipping the IDFT operation all together [That in fact would be the exact definition of the Window approach, but in practice it can be sufficiently approximated by a IDFT if the target response is sufficiently interpolated. To demonstrate the difference, I have interpolated our target response by a factor of 10, resulting in the following estimate of the impulse response (989 samples) by taking the IDFT of the desired frequency response after it has been interpolated (note the result still suffers from time domain aliasing compared to using the formula for a sinc function as the impulse response which would be precise, but this is to show that even though both solutions use the IDFT, the result of taking an IDFT of 99 samples directly versus taking 99 samples of a 989 sample IDFT are very different): 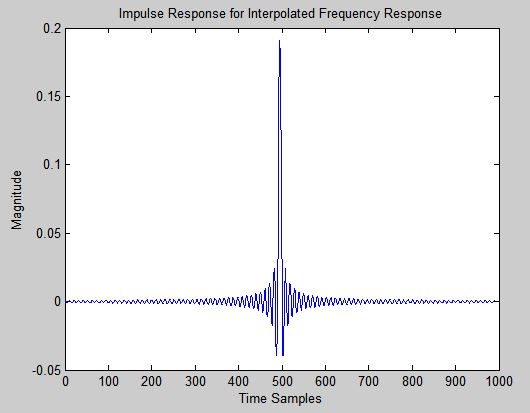 Below is the comparison of the coefficients in both approaches showing how the difference in values occur at the tails; the Window method better approximates the actual impulse response, which is still decaying past the length of our filter. The Frequency Sampling method causes the values beyond the length of the filter to fold over, increasing the values of the coefficients, leading to increased ripple in the frequency domain. Thus truncating the result (rectangular Window) using the Window method results in a higher performance filter, and further reducing the tails with a more advanced window function can lead to further performance at the expense of increasing the transition band. 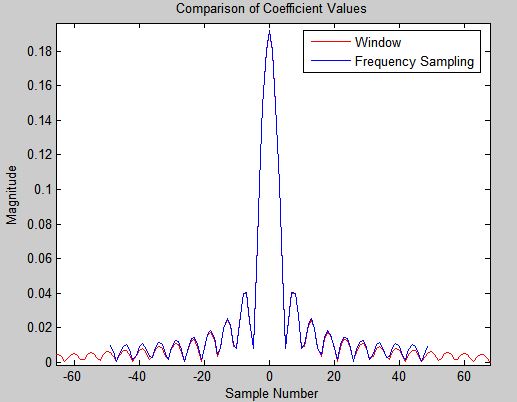 The center 99 samples of this impulse response are chosen as the filter coefficients (this is the rectangular window). Below shows the result for both filter designs. Further, the performance of the windowing approach can be further improved by selecting the 99 taps used with a higher performance window such as Hann, Kaiser, Blackman-harris, etc. 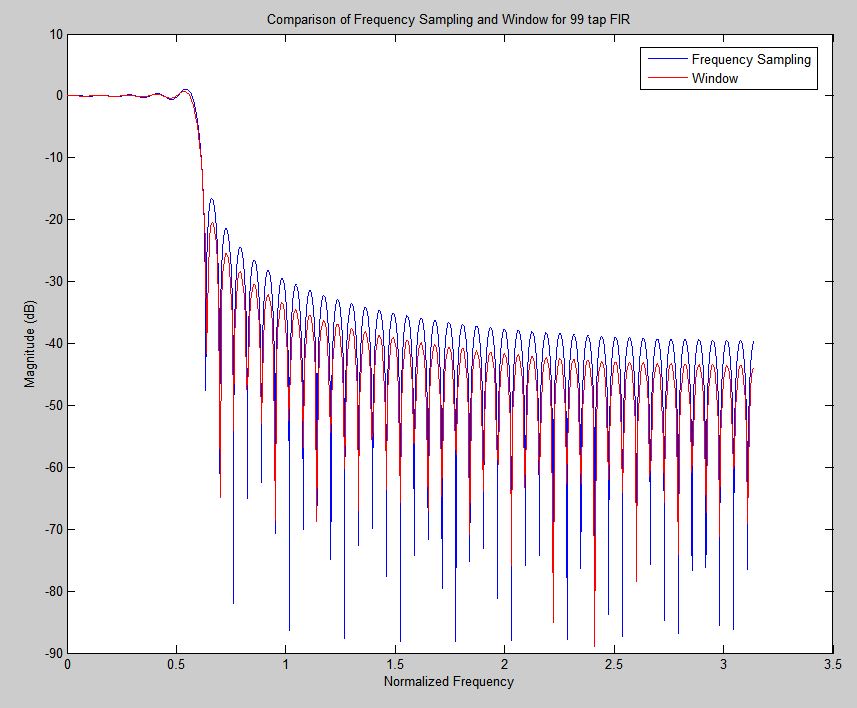 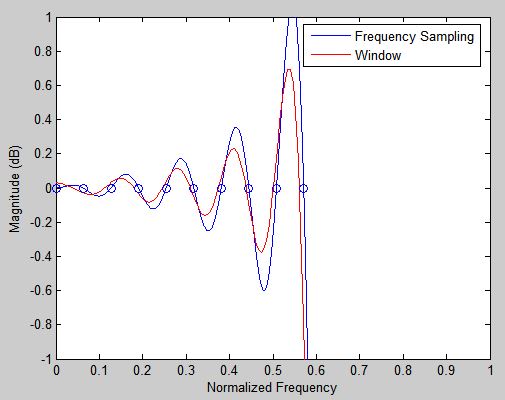 I believe the above two approaches are insightful, but I would rarely use either for an actual filter design. It would add interest if readers commented on applications where either of these two approaches are actually the "best choice". My design approaches of choice are the Least Squared and the Remez-Exchange (equi-ripple) algorithms. Most of the time I go with Least Squared as that results in the best statistical performance (best SNR solution), while the Remez will meet a target specification consistently throughout the passband and stopband. 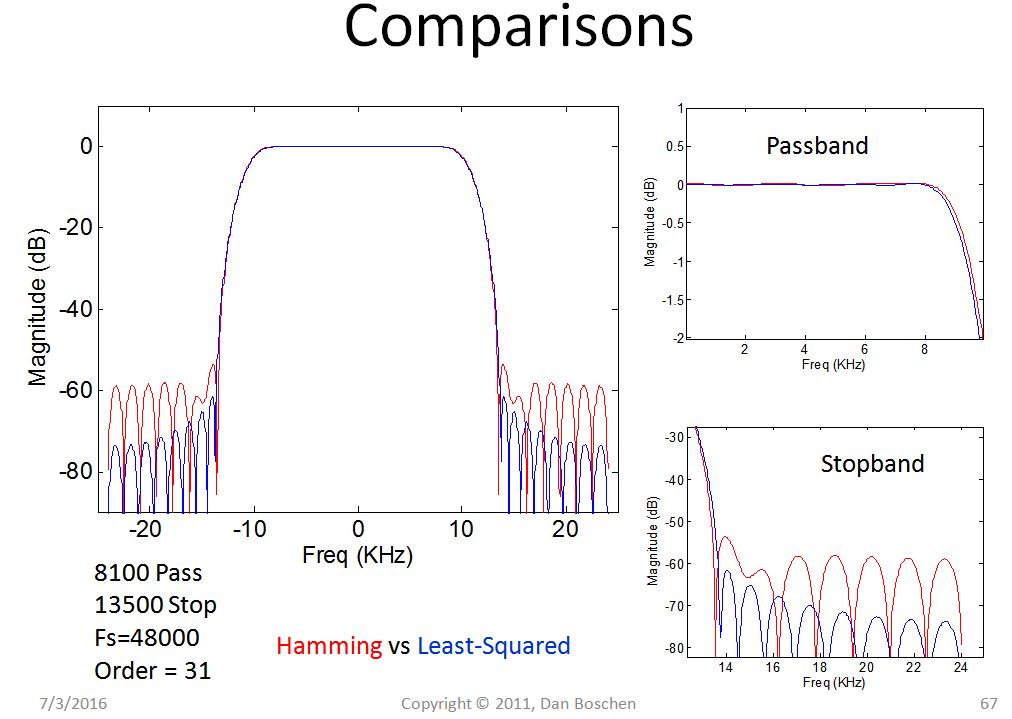 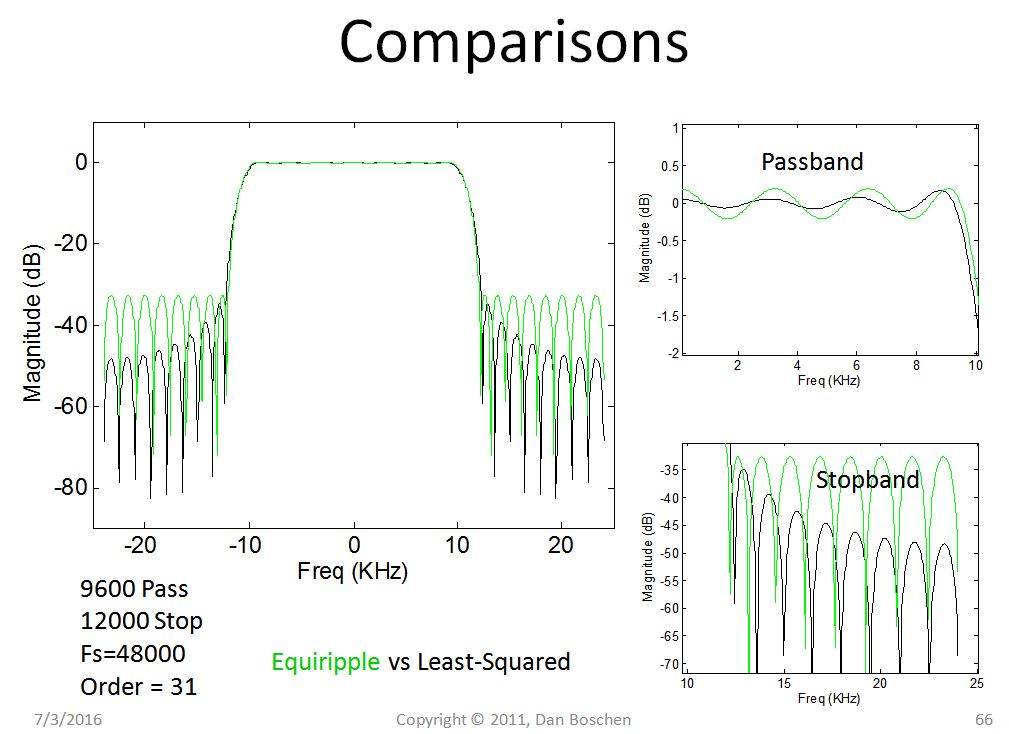 Not the answer you're looking for? Browse other questions tagged filter-design ifft or ask your own question.