"Undersampling" and "Oversampling" are common terms when referring to the choice of sampling frequency for analog to digital data conversion. Is it possible to Undersample and Oversample a waveform at the same time? Examples showing why or why not will be helpful.

Undersampling is also known as "bandpass sampling" and "IF sampling". Consider the sampling of an 11 Hz sine wave and a 1 Hz sine wave, both sampled by a 10 Hz sampling clock as in the figure below: 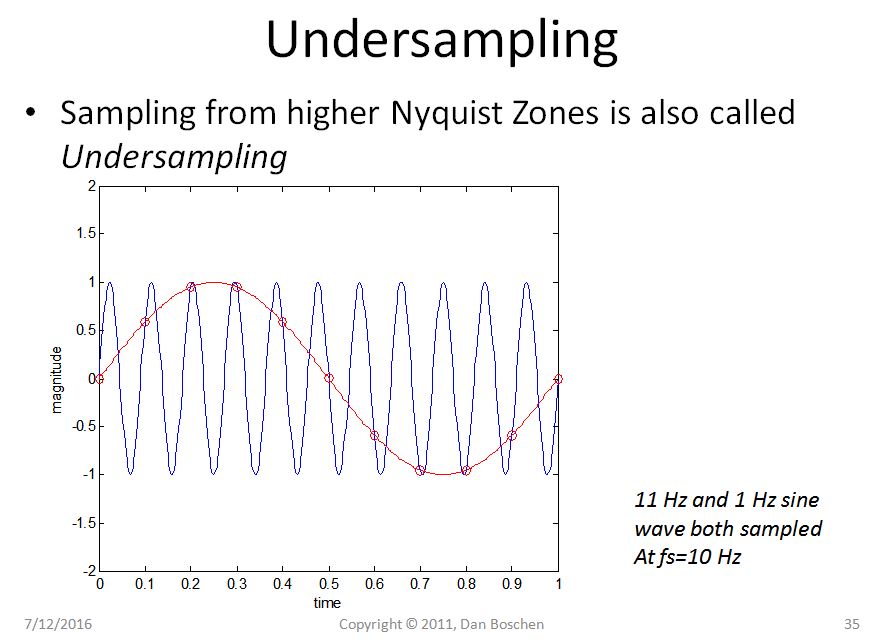 The samples that are produced (the red circles) for both waveforms are identical. Thus the 11 Hz "Intermediate Freuency" or IF has been downconverted in the sampling process to 1 Hz. We can use this technique to undersample a bandpass waveform, and thereby down-convert it at the same time (putting our waveform of interest in the first Nyquist zone: ±$F_s/2$ where $F_s$ is the sampling freqquency). A key requirement that satisfies Nyquist is that the sampling rate used must exceed twice the bandwidth of the signal (note I said bandwidth, not highest frequency!).

That is "Undersampling" as most often described. To oversample a waveform, we sample at a rate significantly higher than the Nyquist criteria, with one motivation to increase the SNR as limited by quantization noise (by sampling hgiher, the same quantization noise is spread over a wider digital frequency, which we can subsequently filter down to our bandwidth of interest and thereby eliminate a significant amount of the noise). Therefore to both undersample and oversample a waveform, we choose a sampling frequency that is significantly larger than the signal bandwidth (thus oversample), and then use a multiple of this sampling clock to down-convert the waveform of interest positioned at a higher IF frequency (undersample).

Not the answer you're looking for? Browse other questions tagged analog-to-digital dsp-puzzle or ask your own question.

17
What are advantages of having higher sampling rate of a signal?
4
Does oversampling improve processing gain?
5
Double the "speed", double the frequency?
4
What is the difference between undersampling and oversampling in analog to digital conversion ?
-2
Aliasing after downsampling
0
Oversample or undersample correlated noise?

6
Nyquist's Stability Criterion and Cauchy's Argument Principle
6
More Simultaneous Dynamic Range with Fixed Point or Floating Point?
6
Simplest All Digital GMSK Modulator
2
comparison between Fourier transform and autocorrelation function
1
How can I mimic this ADC for a given resolution, sampling rate and input with MATLAB or Python?
1
Very fundamental question: by what number do you divide your ADC counts?
1
Z-Transform and DFT