Is a leaky integrator the same thing as a low pass filter?

Is a continuous-time leaky integrator thus the same thing as a low pass filter with time-constant $A$, up to some scaling of the input?

A so-called leaky integrator is a first-order filter with feedback. Let's find its transfer function, assuming that the input is $x(t)$ and the output $y(t)$:

where $\mathcal{L}$ denotes application of the Laplace transform. Moving forward:

This system, with transfer function $H(s)$, has a single pole at $s = -A$. Remember that its frequency response at frequency $\omega$ can be found by letting $s=j\omega$:

So the system's DC gain is inversely proportional to the feedback factor $A$. Next, let $w \to \infty$:

The system's frequency response therefore goes to zero for high frequencies. This follows the rough prototype of a lowpass filter. To answer your other question with respect to its time constant, it's worth checking out the system's time-domain response. Its impulse response can be found by inverse-transforming the transfer function:

where $u(t)$ is the Heaviside step function. This is a very common transform that can often be found in tables of Laplace transforms. This impulse response is an exponential decay function, which is usually written in the following format:

The frequency response is the same, yes, but the application is different: 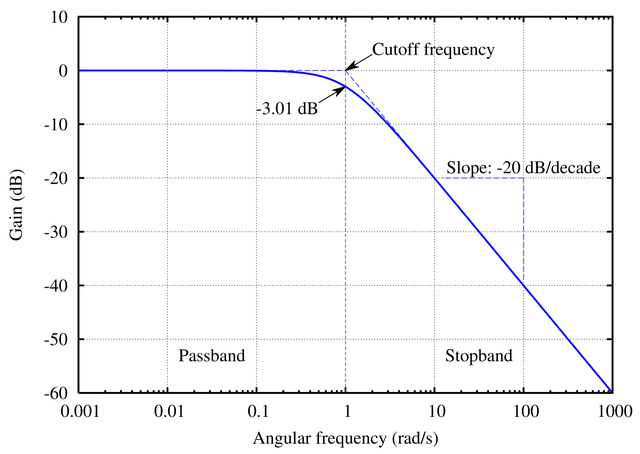 Also, integrators are always first-order, while low-pass filters can be any order.

27
Is there a technical term for this simple method of smoothing out a signal?
5
Is there a common name for the first order IIR averaging filter?
2
Mathematical Proof of Complementary Filter？
1
Is the typical implementation of low pass filter in C code actually not a typical low pass filter?
2
Problem with 1st order PLL update equation
0
Frequency response of a (rectangular) integrator