Given a signal $x(t)$, how do I implement a form of autocorrelation function defined as $a(t,T) = x(t-T)x(t+T)$, where $T$ is an arbitrary constant?

(a fast implementation would be ideal)

Edit: This kind of signal I came across from seeing a "Parametric Symmetric Autocorrelation function", defined as above.

Thus far, I have implemented the steps as below for an example chirp: but the output of the fft2 at the end is wrong. (not a correct frequency)

At the output of the autocorrelation function (the PSIAF variant): 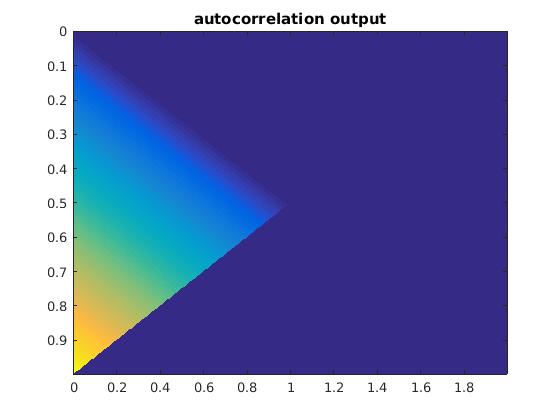 The final output of the LVD is wrong (should be point like):

Solved: Will look at using some of the already published C codes as per answer below to compute the $ R(t,\tau) $

Note that there is some C code for implementing the WVD and other distributions here. That code calculates your $R(t,\tau)$ first before convolving various 2D functions with it and then taking the FFT in order to generate the different distributions.

The definition of autocorrelation (for a real-valued signal $x$) is

You only have to calculate $R_{xx}$ for positive $T$ since it is an even function. If you want to optimize further you may approximite by using

where $\mathrm{sgn}$ is the sign function, this will remove all the float/double multiplications and gives a pure summation.

Not the answer you're looking for? Browse other questions tagged discrete-signals autocorrelation or ask your own question.