I'm designing a $2$-stage filter and was simulating the effect of quantization to a certain number of bits at the filter output. The result I got was far from expected - and would appreciate any intuition from the experts here.

The high-level idea is:

Initially I set $N=M=P$ to be $16$-bits. The filters themselves have a stop-band attenuation of $\approx90\textrm{ dB}$. What surprised me was $16$-bits between filters was not enough - at least in terms of the frequency response.

So if I do not quantize the inter-filter values I of course get ideal behaviour and the overall frequency response (measured via an FFT of an impulse response) is the combination of each individual frequency response - and my stop-band attenuation is $\approx90\textrm{ dB}$. Of course the input bit-width does not matter here.

However, if I quantize to $16$-bits between stages, with rounding, I would have thought this more than sufficient to preserve the filter frequency response accuracy - but I was wrong - the stop-band attenuation dropped to $\approx84\textrm{ dB}$ in places. It required $18$-bits inter-filter bit-width in order to maintain performance.

So the question is - is there a rule of thumb for how many bits to preserve. Why is $16$-bits not enough for $\approx90\textrm{ dB}$ attenuation?

A source of dynamic range issues can be quantization leading to noise increase in your summation if in the datapath or errors in the frequency response if the coefficients themselves have too much rounding error. Quantization noise for an $K$-tap FIR filter can increase as much as $10 \log_{10}K$ in dB when you scale the signal at the input of the filter. This is the reason for extended precision accumulators; good practice is to let the filter grow the signal and then attenuate after the filter. Also equally important is that your coefficients should be (as a rule-of-thumb) at least $DR/6 + 2$ bits in precision where $DR$ is the stop-band rejection requirement of your filter.

To the extent that each signal at each tap in your filter can be considered uncorrelated (and this holds if the signal is white, however your first filter will provide some correlation between delay taps reducing the total increase in the noise).

See the figures pasted below that compare the three ways to scale the signal.

To explain these figures, this is the case of a filter with a fixed precision datapath, and a case where due to the input level of the signal, the filter would overflow (since the signal within the bandwidth will increase by a factor of $K$ in magnitude). To keep the filter from overflowing, the filter designer can scale the input, or scale the coefficients, or (the right answer) is allow the filter to grow in precision, and then scale the output. In the first two cases, the noise would be the quantization noise due to the scaling, and grow in magnitude by the $\sqrt{K}$ (stated differently, variance grows as $K$, standard deviation grows by $\sqrt{K}$), in the last case the noise is just the quantization noise due to the scaling (6.02 dB/bit + 1.76dB for a full scale sine wave) without further growth.

(Note $\Delta^2/12$ denotes the variance due to quantization noise, where $\Delta$ is one LSB step size) 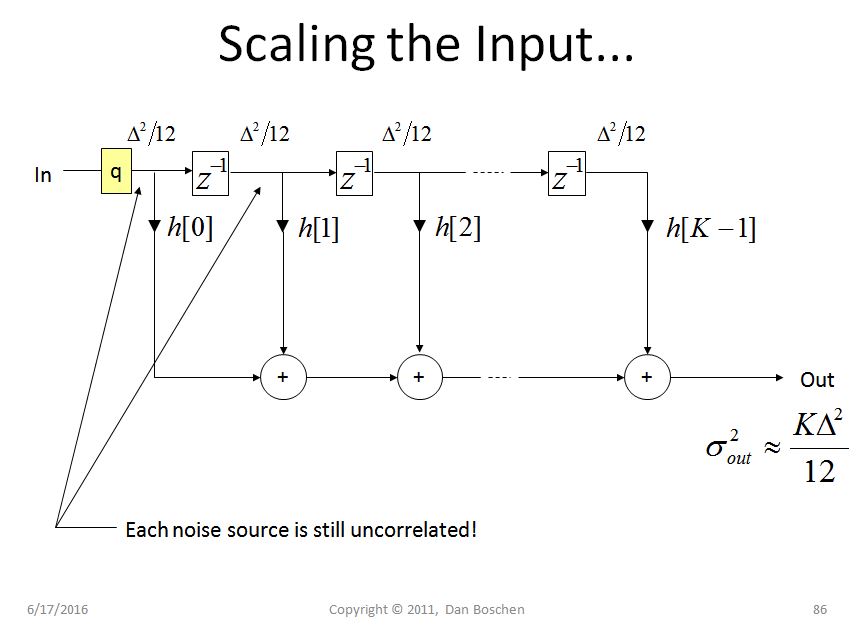 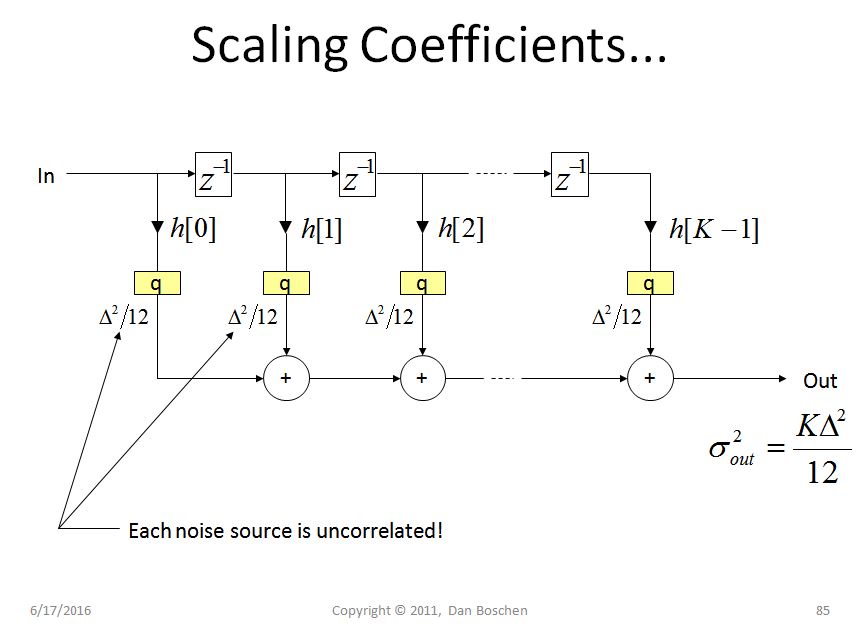 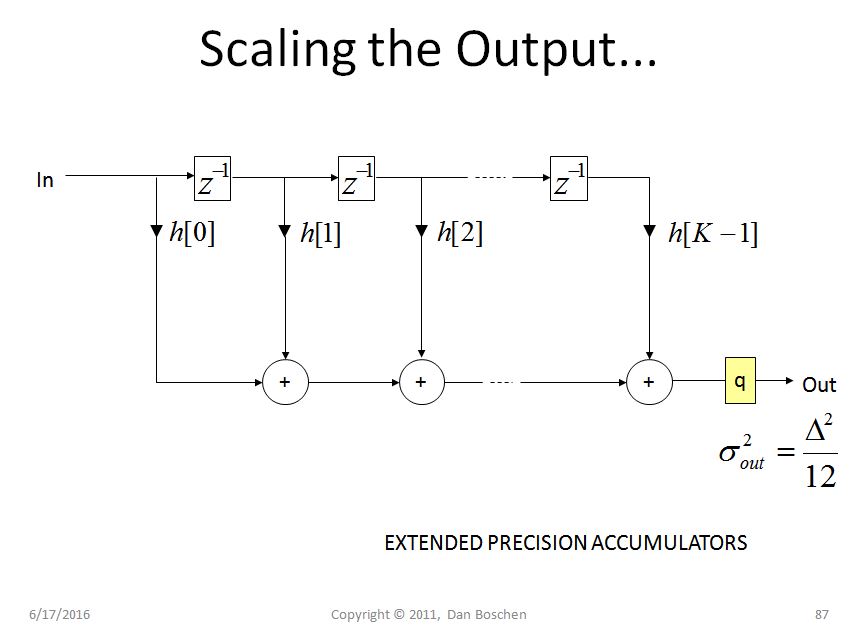 I have observed an interesting result - which I think highlights perhaps a weakness in using an impulse response through the quantized data-path to measure the overall performance. In all cases tests below my coefficients are the same, and are always quantized. The results are:

So the good news is it appears 16-bit between filter stages is good enough to ensure the performance I need. The interesting thing appears to be the fact that the impulse response test does not correctly show this.

I'd be interested to hear if others have seen something like this, and could suggest an alternative method to measure the true frequency response of a quantized filter chain.

Not the answer you're looking for? Browse other questions tagged filters finite-impulse-response bitdepth or ask your own question.

1
What is the correct gain of an RRC Filter?
0
Fixed point saturation and round