Baseline Correction: What is the concept of a baseline shift and baseline correction?

I have a laser induced fluorescence signal data-set. Currently the processing pipeline performs baseline correction by manually moving the signal so that the initial point is at the origin. Is this a right approach?

Is it to be done only if the shift is predetermined or known? Does that mean baseline error signal has zero frequency? Or can there be low frequency components which can be called baseline errors?

Edit: Laser Induced Fluorescence signal is used to get relative quantities of collagen, NADH etc from the tissues. 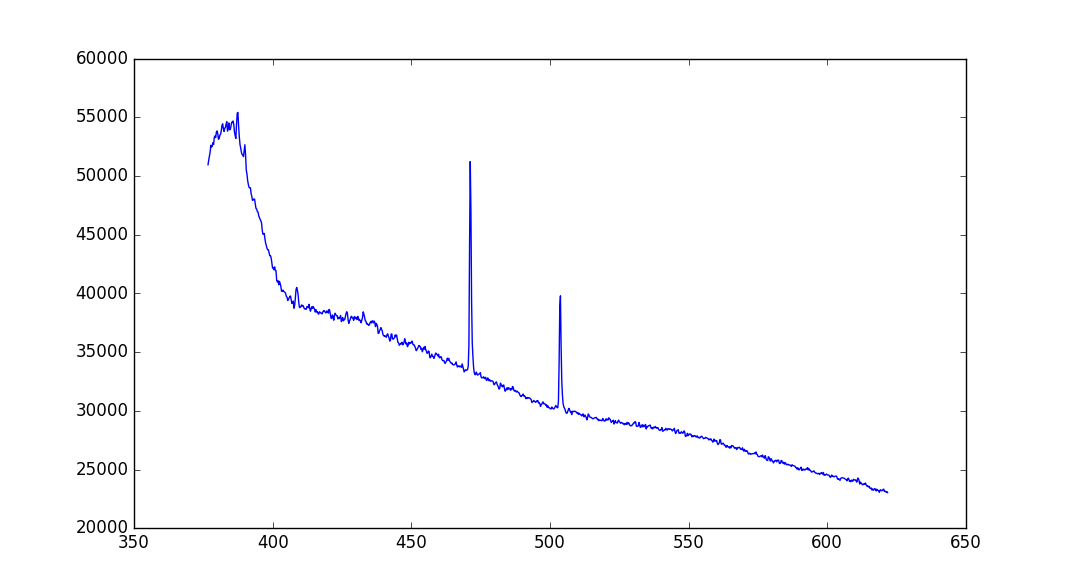 I am from neither signal processing nor physics background. The requirement I have been given is to develop a software for analysing the preprocessed data. However, I observed that currently the preprocessing uses the above said manual method for baseline correction.

Baselines are visually simple, most of the time, but can be a pain to filter. With your graph, for instance, what should happen between 380 and 400 is not clear.

With fluorescence, it is not sure you can get a fine model of the baseline. So effectively, in many analytical instruments, there are more or less automatic baseline fits: constant, linear, parabolic.

Without hard models, it is common to use soft ones, but we need to know what you want to quantify in your data. If it looks like other analytical chemistry data, where you want to measure peaks above a baseline, you may try the technique given in Chromatography Baseline Placement, combining low-pass filtering and peak preservation.

Is there any chance you could share the dataset?

I like the answer by @Laurent Duval and will give it an upvote. I also like the comments, especially that of @robert bristow-johnson, but I thought I would try doing what I suggested in the comments, which is basically (I think) what robert bristow-johnson essentially suggested. First, I made up a fluorescence spectrum that more or less matched what the OP posted. Then I processed it as shown in the following model: 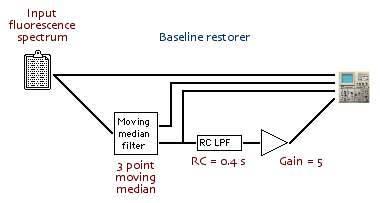 The raw fluorescence spectrum was processed with a 3 point moving medium filter, implemented as per A.W. Moore, J.W. Jorgenson, "Median Filtering for Removal of Low Frequency Background Drift", Analytical Chemistry, 65 (1993) 188-191. As shown in the figure, the moving median block has two outputs. The upper one is the filtered output (not used, per se) and the bottom one is the difference between the original spectrum and the moving median filter's output. Then the difference spectrum is filtered with a simple RC low pass digital filter and given a little gain. The results are on the next figure: 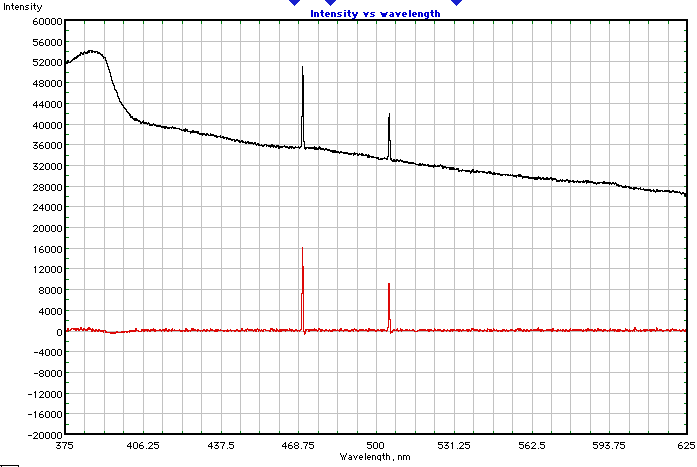 It is easy to see the little 'feet' on the peaks after the baseline restoration, but they are not too large. With regard to fluorescence intensities and gains, calibration usually comes to the rescue. I hope this helps.

Not the answer you're looking for? Browse other questions tagged signal-analysis noise or ask your own question.

3
Concept of Orthogonality and Orthonormality
4
What is the rms value of a signal and how to use it
0
Concept question - What is noise?
2
Finding baseline (reference) of nosiy data and lag/lead between 2 signals
3
What is the signal-noise model of laser induced fluorescence?