I've a quadrature mixed signal with 10 MHz as highest frequency available. I want to shift it to any frequency lesser than 10 MHz. I should get it by multiplying this signal by cosine of the required frequency. Right?

If you have a quadrature mixed signal, you have two outputs of the signal in 90 degree phase to each other. To complete a full complex frequency conversion (which would shift the frequency in one direction, as opposed to a real frequency conversion which would create two sidebands) you need to multiply one of the outputs by the cosine term of the required frequency shift and the other output by the sine of the required frequency shift. By swapping sine and cosine ports, you change the direction of the shift. The outputs after each multiplier are then summed in phase. See diagram and derivation using trig identities for the multiplication of sines and cosines below. 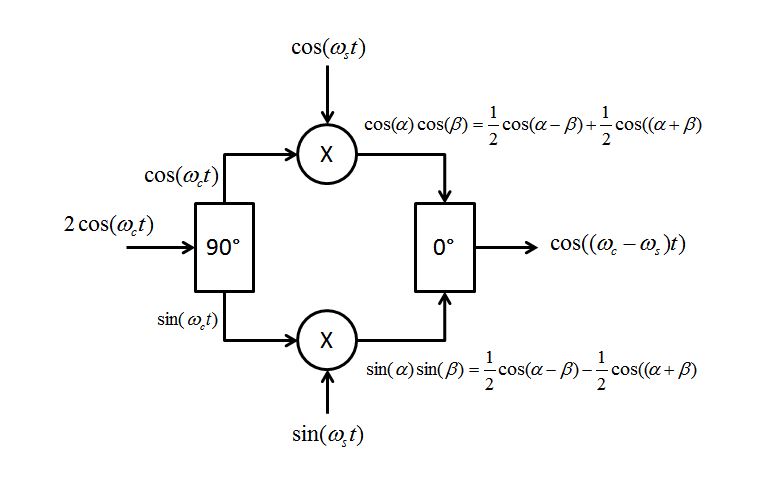 If you are comfortable with the idea of exponential frequencies (full complex frequency including positive and negative frequency etc) then I prefer the view point below to describe single sideband frequency translation. Comparing the two diagrams shows the value of converting "I" and "Q" signals as typically constructed in hardware to implement complex signals into one complex signal path for the purpose of analysis. Using cosines and sines instead of exp can be quite cumbersome especially as the complexity of the system increases. 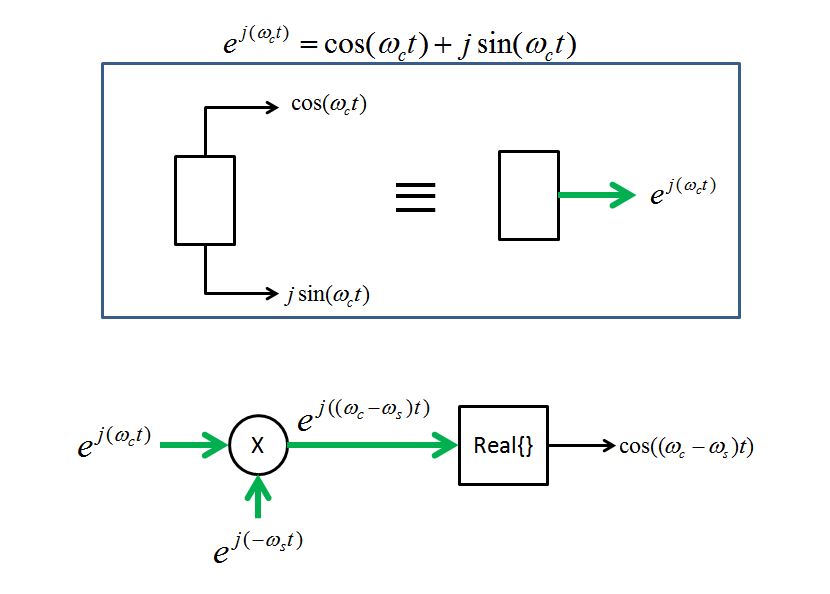 For those less familiar with the notation, $Ke^{j\theta}$ is simply a complex value with magnitude K and angle $\theta$. Therefore $e^{j\omega t}$ is a signal whose magnitude is 1 and angle is increasing linearly with time at rate $\omega$; a spinning phasor counterclockwise on a complex IQ (polar) plot, representing a "positive" frequency. Similarly $e^{-j\omega t}$ spins clockwise and represents a "negative" frequency. With that, one should be well equipped to use the more compact and analytically simpler exponential notation.

The following additional figures and content were added to help answer the question on the subsequent down-conversion and to build a better understanding of the complex (positive and negative) frequency domain in describing frequency translation implementations.

Frequency spectrum of baseband quadrature modulated signal (this could be a single tone on one side, or multiple independent frequencies, point is the positive and negative frequencies are independent):

If we split the carrier in quadrature (with a Hilbert transformer, or a 90° splitter, or just generate a sine and cosine component, but in the end have two tones with a 90° relationship to each other), then in implementation we have two real signals used to represent a single complex frequency $e^{j\omega_c}$ (you may start to see how it is so much easier doing all analysis with the e's and then do the implementation with the sines and cosines):

To up-convert the baseband signal to the carrier frequency, we multiply the two signals in the time domain (which is convolution in the frequency domain; so for an impulse function such as our carrier it is a simple shift). First consider what would happen if we multiplied the baseband signal with the carrier $cos(\omega_ct)$ directly (eliminate the 90° splitter in my first figure, replacing $sin(\omega_ct)$ with $cos(\omega_ct)$). Notice the output would still be complex as the positive and negative frequencies are not the same- so we could not transmit this with a single antenna (2 real signals are required to represent a complex signal). If we proceeded to take the real portion, distortion of our signal would result as depicted in the figure, so we can't transmit that either. 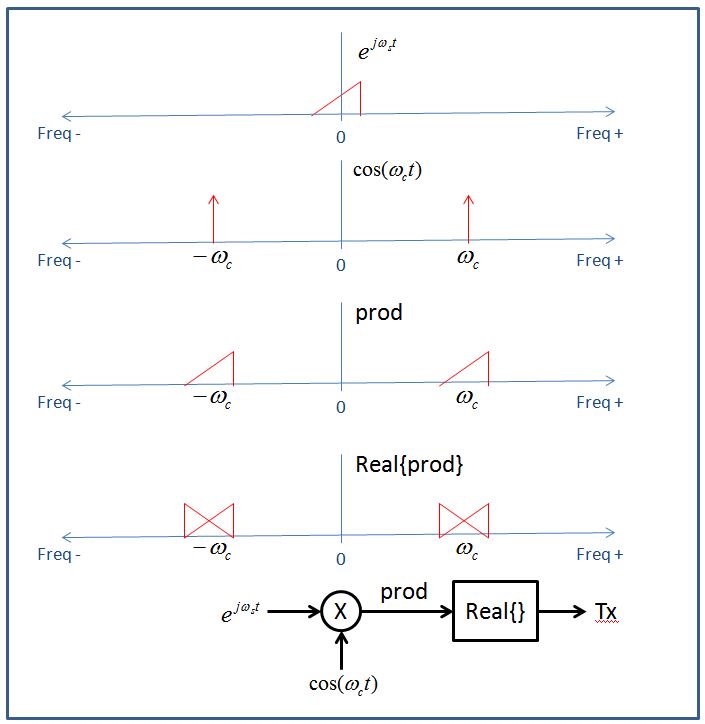 This explains why we need to also take the Hilbert transform of the carrier (converting the cosine into sine and cosine components, and representing a complex version of the carrier that is a single spinning phasor $e^{j\omega_ct}$, or in the frequency domain a single impulse in the positive domain with no negative component) prior to multiplication. We take the real portion of the product and can then send an undistorted real waveform representing our baseband signal modulated up to the carrier frequency. 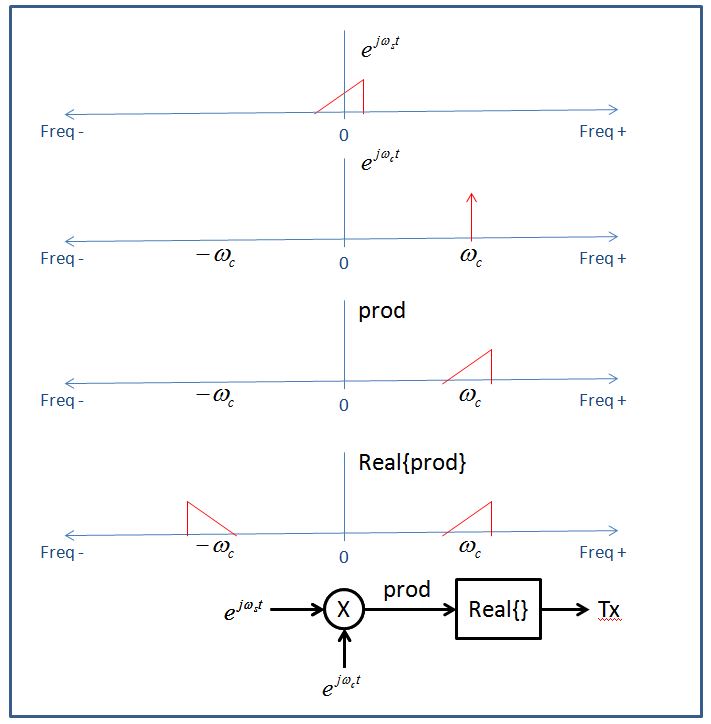 With the details of the up-conversion process in mind, it will now be very easy to answer the question if a quadrature conversion of the received signal is required prior to multiplying by sine and cosine to recover the baseband signal. The answer is no, but there is an advantage to doing so in situations when an image frequency cannot be easily filtered.

Figure showing spectrum doing a downconversion with no Hilbert transform of the received signal. It is interesting to note if you swapped sine and cosine in the (real) multipliers, this would represent a single impulse in the positive frequency domain, shifting the negative frequency component of the received signal to baseband, causing the spectrum at baseband to be inverted: 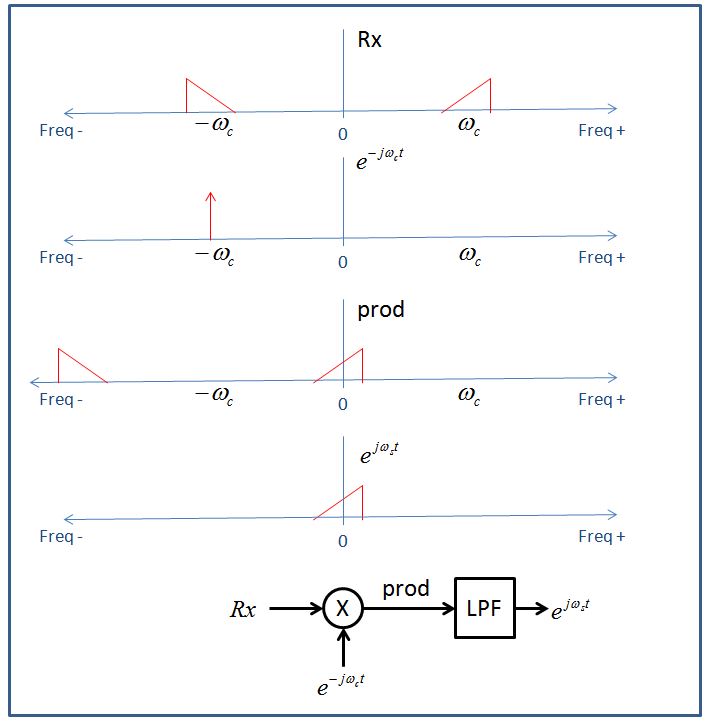 Figure showing spectrum doing a downconversion with a Hilbert transform of the received signal prior to sine/cosine multiplication. Here you can see what would happen if you swapped an input to one of the (real) multipliers: The signal would be shifted to a higher frequency twice the carrier instead of to baseband. 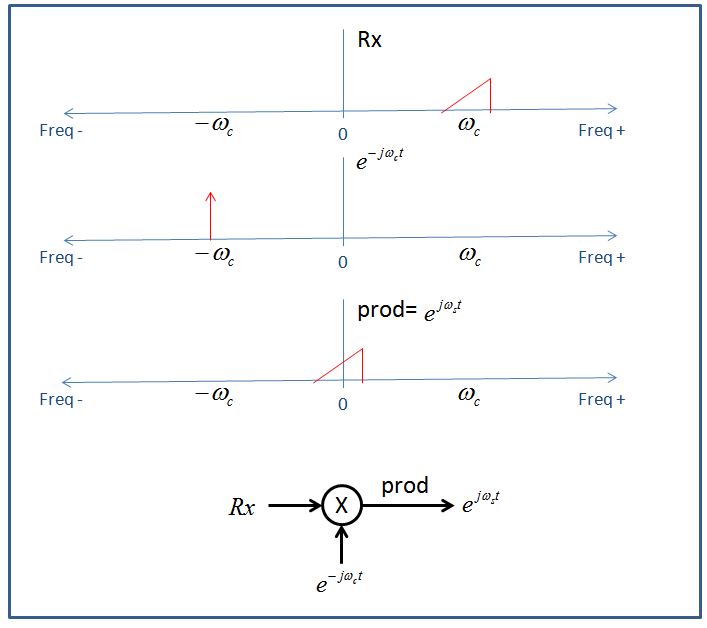 If you have a quadrature-mixed signal, I assume you mean a complex-baseband signal. In that case, you'll want to multiply not just by the cosine of the desired shift frequency, but a complex exponential function instead, which contains in-phase (cosine) and quadrature (sine) components:

where $f$ represents the frequency shift that you would like to apply to your signal.

5
What is an Intuitive Explanation of the Phase of a Signal
6
Recovering signal for psk
6
Obtain I/Q Components from a Real Signal On the Fly - Hilbert Transform or Digital Downconversion?
4
Understanding I and Q modulation
0
Why Shannon Theorem has nothing to do with frequency?
2
Level Correction For Digital Down-Convertion?
2
Effects of interchanging sine terms with cosine terms
0
How is quadrature mixing done?
0
OFDM SubCarrier and its relationship with IFFT in context of Real and Complex
0
Intuitive meaning of complex time domain signal representation (quadrature sampling)
See more linked questions

2
Technique of sampling a high-frequency signal (Mhz) with a lower sampling rate (khz)?
4
Frequency Shifting in MATLAB
0
How is quadrature mixing done?
0
MATLAB center frequency shift
0
How to design a digital filter with a frequency dependent phase delay?
0
Frequency modulation in MATLAB
1
Generating IF signal for FMCW radar