I'm learning some basic signal processing to use in my research. So I'm trying to understand the pwelch function in MATLAB to calculate the PSD. My understanding was that the PSD is the density of power in the frequency bins, and thus the PSD of a sine wave should be a delta function. However, when I run my simple code I get a distribution. 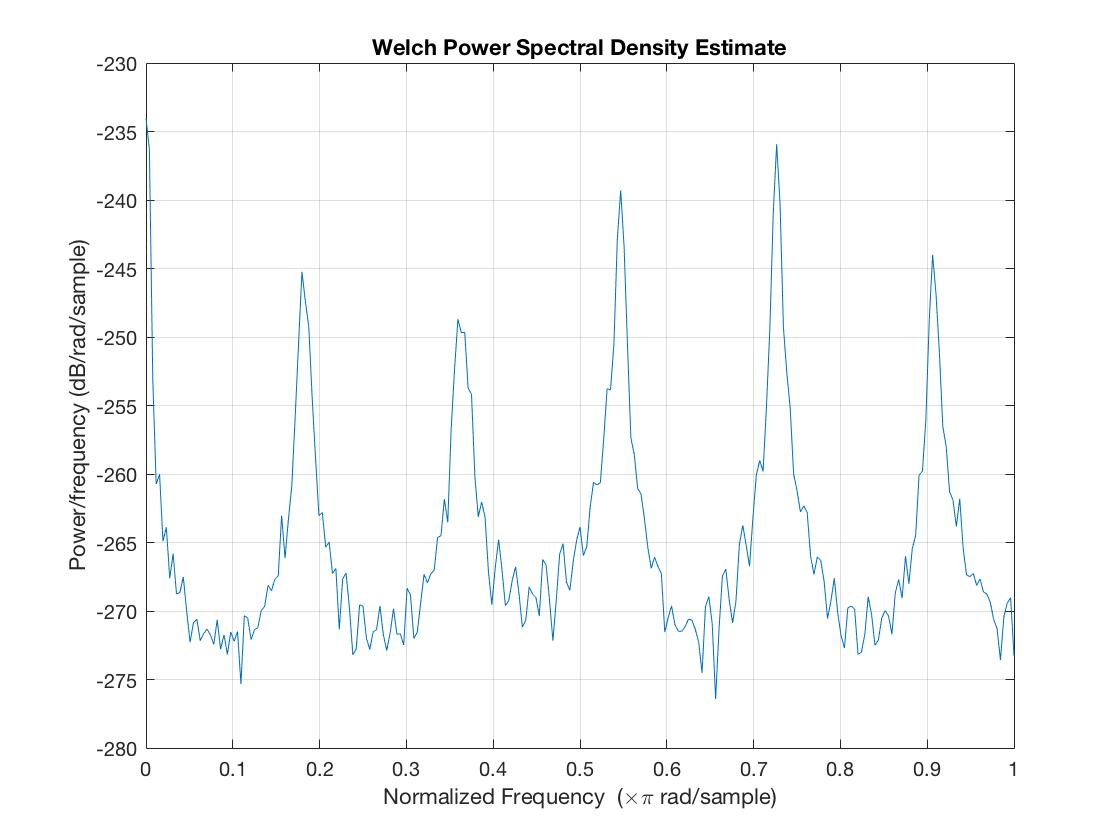 Here is my MATLAB code:

For $n$ integer will give you zero, or something around machine epsilon. Try setting your signal to

And you should get more like what you expect.

The PSD of a sine observerved for infinite time is indeed a dirac impulse.

Is this something to do with windowing?

But: you're not observing the actual PSD of a sine, but you're observing a small excerpt of time. So, yes, this is due to windowing.

Think about it: because you don't do anything with an infinite duration of observation, it's like you take a rectangular window, and use it to cut out a piece of infinity (your observation length). Now, that's multiplication with a rectangle in time domain, which is equivalent to convolution with a sinc in frequency domain.

You can get a very sharp PSD if you just apply the DFT to a sine signal actually sampled exactly for a multiple of its period, but that's not the case in general, either.

Or is my understanding of PSD wrong?

That's hard to tell, because I don't know your understanding of Power Spectral Density!

Being strict, the PSD is actually a property of a random process, namely:

The power spectral density is the Fourier Transform of the autocorrelation function of a wide-sense stationary random process.

As you can see, that's a property of a random process that you'll never be able to observe directly, but can only deduct from other observations, given some assumptions on the process observed.

Now, the "technical" understanding of PSD is "I went, and looked into infinitesimally small parts of the spectrum, and noted down the Energy in there, after observing those for a finite amount of time".

Not the answer you're looking for? Browse other questions tagged matlab power-spectral-density or ask your own question.

4
Relation between frequency spectrum and PDF of a random variable

4
Why the RMS of a PSD curve is the root of the area below
0
How to Show A OFDM Symbol's PSD in Matlab
0
Trouble Generating a Sine Wave in C/Matlab from Basics
0
What could be causing these humps every 10 Hz on my PSD estimate data?
2
PSD Magnitude with Welch's Method
1
Scaling of the PWELCH function in MATLAB
0
Power Spectral Density units