Is there a name for this smoothing formula?

Hi: I am reading a book called "lectures on wiener and kalman filtering" by Professor Thomas Kailath. On page 18, it says the following:

To carry through this approach, let us first note that a smooth random process $ \{ Y(\tau), a \le \tau \le b \}$ can be approximately represented as

There is a picture included with the text: 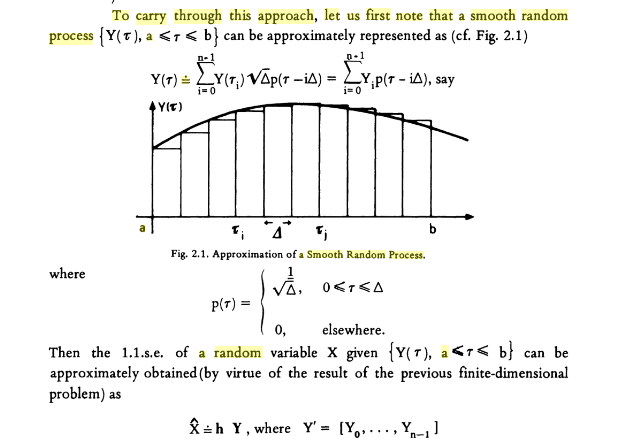 I have some questions about this formula but I can send someone the pages from the book if they need them since, without a picture, it may be difficult to understand. ( note that I don't even follow it with the picture !!!!! ).

1) I don't have any intuition for this smoothing formula. This seems like some kind of windowing process that uses weights that are smaller for further away values and larger for closer values ? Is there a name for it ?

The first misconception is that this is not a smoothing formula. It's a way of representing an already smooth continuous-time signal in discrete samples.

This is just allowing us to simplify $Y(\tau_{i}) \times \sqrt \triangle$ and allow us to talk about $Y_i$ as shorthand notation.

3) It looks like the weights are going to be negative and positive depending on the value of $\tau$. Is this correct ?

4) Like I said, I can send the 3 pages ( what I wrote is a part of a longer derivation of a functional relation for least squares ) to anyone who is interested. Dr. Kalaith makes this approximation sound trivial but it's not to me..

Please give me feedback on the above answers.

Not the answer you're looking for? Browse other questions tagged kalman-filters smoothing or ask your own question.

7
how does this equation correspond to smoothing?
4
Smoothing data by using Kalman filter
1
Implementing a 1-D Kalman Filter Regression, Missing the smoothing action (getting the opposite)
2
Derivation of Transfer Functions for Kalman Filter
26
Is there a technical term for this simple method of smoothing out a signal?
3
Does this Signal Smoothing algorithm have a name?
1
Question About Kailath's Paper - An Innovations Approach to Least Squares Estimation Part I: Linear Filtering in Additive White Noise
1
Classifying and filtering out noise from zero crossings