How do I interpret the result of a Fourier Transform?

For example, I entered the following "equation" into Wolfram|Alpha:

So as to take the Fourier Transform of a signal like this:

And turn it into some graphs that look like this: 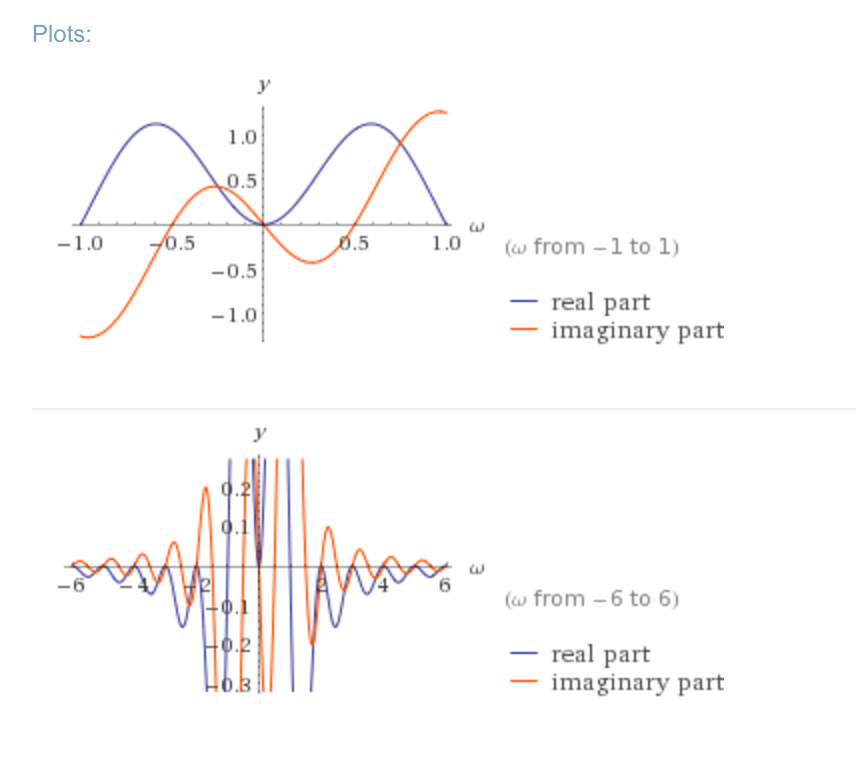 My understanding from constantly — but casually! — hearing about Fourier Transforms (and DFT/FFT) in the context of audio processing and SDR I/Q data processing, is that I now have some information about a portion of the spectrum of the input signal. I'm trying to deepen my understanding, however, and refresh my memory of all I started learning in a Differential Equations class years ago.

Given my more recent practical background I'm left with the following questions understanding what the Fourier transform just did for me:

From https://dsp.stackexchange.com/a/24758/18819, I gather that if I primarily care about power at a given frequency I would take the magnitude of the complex vector. From a Wikipedia article on negative frequency I'm not sure what its "wheel spinning backwards" analogy would mean in the context of e.g. electromagnetic or acoustic waves, but I'll take it to mean maybe it's just "some more of the signals" and combine the values across the y-axis.

So am I correct to interpret this as follows:

Or what would be the best way to understand the first Fourier plot above, and derive relevant results from it?

The Fourier transform of a function $x(t)$ is defined by

Since $e^{-j\omega t}$ is complex-valued, the Fourier transform $X(\omega)$ is generally a complex-valued function, even if $x(t)$ is real-valued.

Since $X(\omega)$ is generally complex-valued, it can be represented by its real and imaginary parts

or by its magnitude and phase

Clearly, the real and imaginary parts are not the same as magnitude and phase.

Note that for real-valued $x(t)$, the real part $X_R(\omega)$ and the imaginary part $X_I(\omega)$ of the Fourier transform $X(\omega)$ are even and odd functions, respectively. Consequently, the negative frequency components are redundant, and knowledge of the spectrum at positive frequencies is sufficient. If you are interested in power, you should rather plot $|X(\omega)|^2=X_R^2(\omega)+X_I^2(\omega)$ (which, by definition, is non-negative, as it should be the case for energy or power). The function $|X(\omega)|^2$ shows the distribution of the frequency components of $x(t)$.

As you've noted, the DC component of the signal is zero, because its average value over time is zero:

Not the answer you're looking for? Browse other questions tagged fourier-transform frequency-spectrum or ask your own question.

4
Does "keying on" a sine wave at a zero-crossing reduce its bandwidth?
3
How to interpret these FFT results?