Assume input signal and discrete output. The signal can cross the limit at 1000 times per second, but it is desired that the discrete output changes at the most once every 15 seconds. See image below: 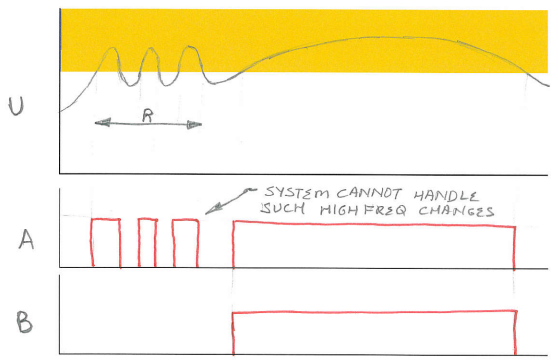 $U$ is the Signal, $A$ is the comparator output, $B$ is the filtered output. The goal is to filter out the output changes in region $R$.

In electronics, a Schmitt trigger converts an analog signal to a digital signal by using two different thresholds (limits as you call them), one for an output state change from 0 to 1 and another for a change from 1 to 0. The first is somewhat higher so that if the input fluctuates between those two thresholds, then there will be no change in the output. The general concept of reluctancy to change state is called hysteresis.

It can also help to lowpass filter the signal first, which is often used in debouncing a mechanical switch, to remove fluctuation very much like in your picture.

Not the answer you're looking for? Browse other questions tagged control-systems or ask your own question.