Analyze stability of a closed-loop system with Bode 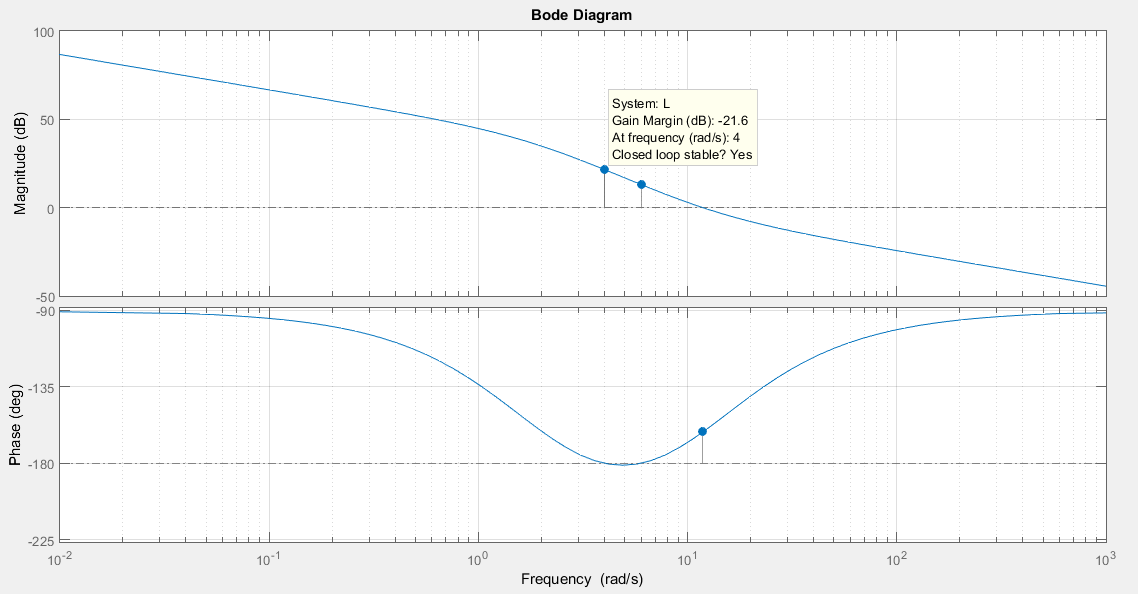 As MATLAB says, it is stable if we close the loop with unitary feedback. I thought that, seeing the Bode plots one could tell if the closed-loop system would be stable if the $0\textrm{ dB}$ crossing occured at a lower frequency than the $-180°$ crossing. I made the Blode plots for $0.01L(s)$ and got the following: 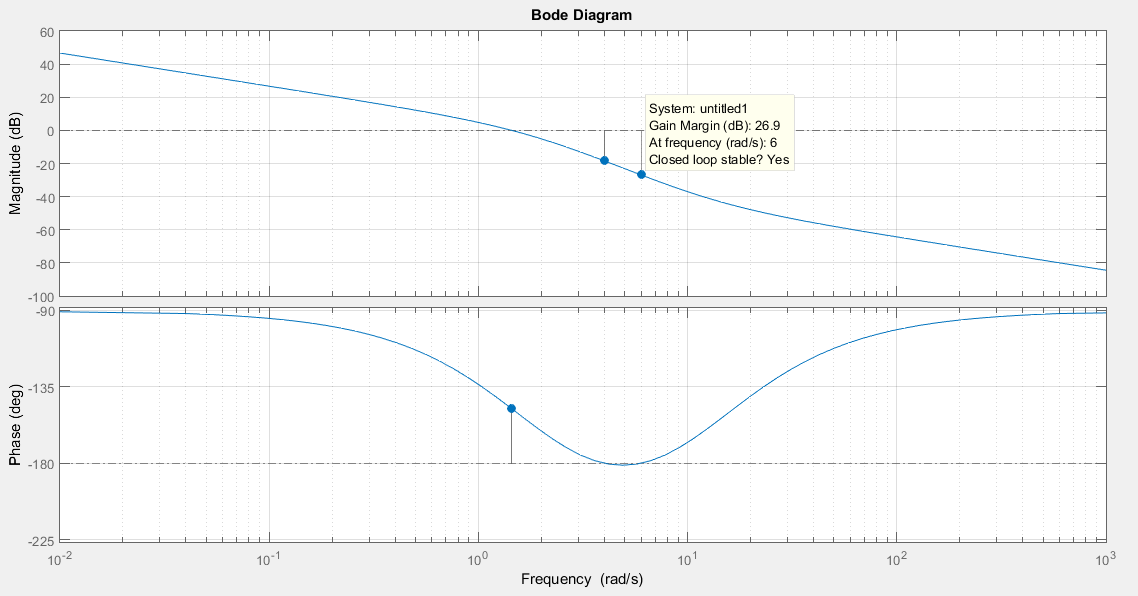 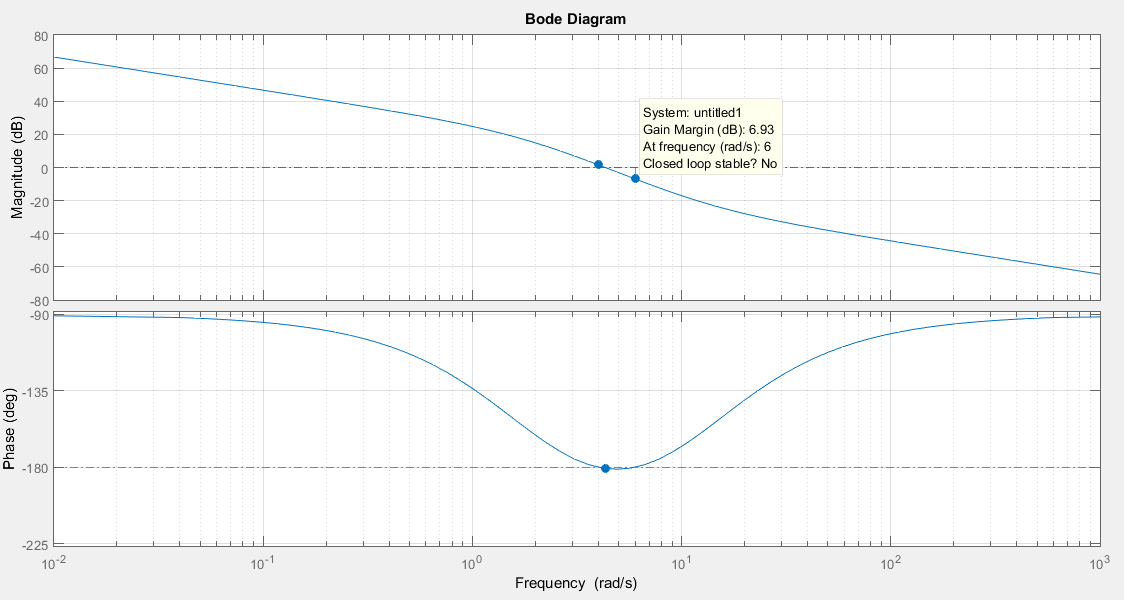 And now the closed-loop system is unstable.

So, my question is: how can one know, with just looking at the Bode plots, if the closed-loop system is going to be stable or not?

I thought that, seeing the Bode plots one could tell if the closed-loop system would be stable if the 0 dB crossing occured at a lower frequency than the −180° crossing.

The usual formulation is to say that the phase margin at the 0dB crossing is > 0. Matlab adds a vertical line to the phase diagram at the frequency where 0dB is. The length of that line is the phase margin.

The phase margin is a good way to decide about stability of a system in a yes/no fashion.

But it looks like you actually want to add a variable gain $k$ to the transfer function. The question now is, for what values of $k$ is $kL(s)$ stable?

You can answer that question by choosing arbitrary values for $k$ and do the above analysis. As you experienced, this is somewhat tedious and only answering the question for discrete values of $k$.

You know that crossing the line of -180° is the critical point where the system becomes unstable at the gain of 1. Again, changing perspective now: look at the phase diagram and find the points (frequencies) where the value is -180°, now find the corresponding gains in the magnitude diagram above.

As you can see, matlab is already doing that for you. Your phase diagram intersects -180° at two points and matlab draws the gains at those frequencies into the magnitude diagram.

Changing the gain, means moving the plot in the magnitude diagram up and down. In your case, if you (choose a gain so that) move the plot down as far as the right gain margin is, the system will become unstable at that point. Moving the the plot further down (decreasing $k$ even further) will result in a an unstable system until the gain is decreased below the value of the left gain margin. The system will be stable for lower $k$ values.

I added two shifted versions of the magnitude diagram into the first body plot, one with the right gain magin (red) and one with the left gain margin (red): 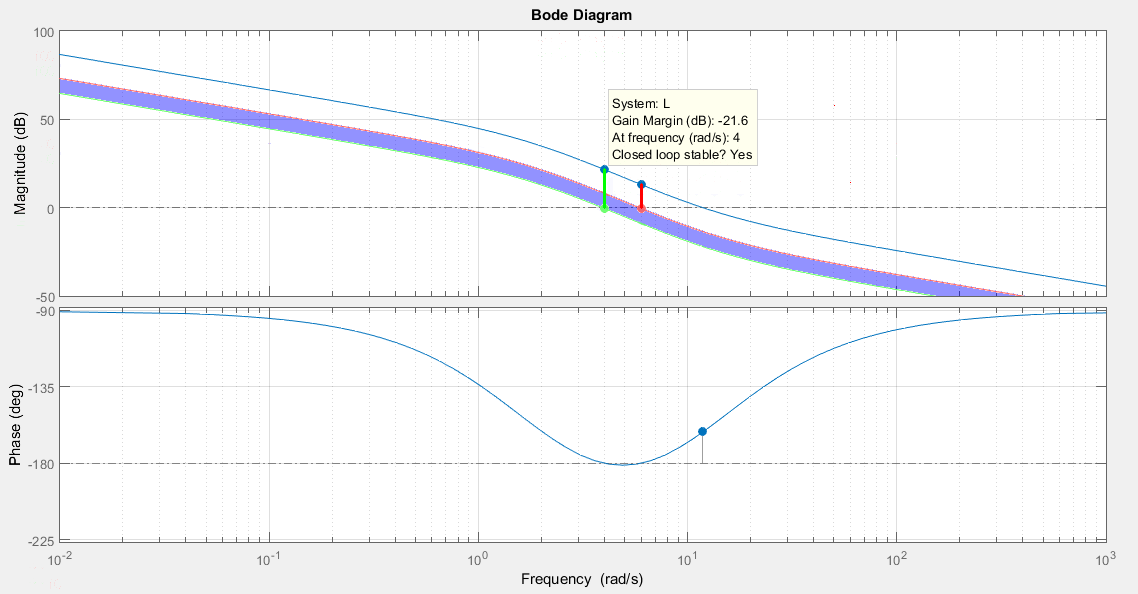 If the magnitude diagram is between the red and green lines (blue area), the system is unstable. This is because the original condition for stability is false in that area (and only in that area): The phase margin at the 0dB crossing is > 0.

Btw, this is why it's called "pole placement": you move the poles around in the root locus so that the system becomes stable.

The bode plot has two points that are critical for stability:

looking at either point in one diagram, and looking at the other diagram at the same frequency allows to make some assumptions about the stability of the system:

Seems like you found a limitation in Matlab as many of the assumptions are likely to assume you don't have your first resonance/eigenmode at such a low frequency. I have systems that will swing to -180 almost immediately (think of any mass only system like mag-lev).

They are made stable by increasing the bandwidth or cross-over to a significantly higher frequency than where the pole is. A 100hz bandwidth servo should handle 10hz disturbances all day if tuned as such - just don't rely on the straight bode output from Matlab to tell you that!

Springs and damping attribute no phase and 90 degrees of phase respectively, so you can make the dominate load to be the spring with a high enough stiffness to dominate the mass*accel effect for the lower frequencies to keep phase and have damping to control the behavior around your cut-off frequency where you can often see some amplification.

NOW - if someone could help with HOW to use a bode with a slow pole properly to assess phase and gain margin, I would be elated because I have had to rely on some closed loop methods of increasing gain and also injecting phase delay until instability is observed rather than from my good friend Bode.

This particular issue WAS in fact a pseudo single axis mag-lev without any damping to speak of.

This system closed loop stable is No, why? Can you explain? Thanks. 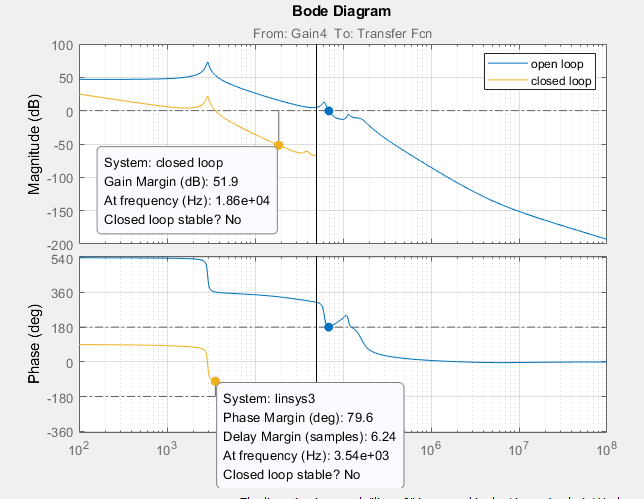 Not the answer you're looking for? Browse other questions tagged control-systems bode or ask your own question.

9
Do we use closed loop or open loop information in Bode plot, Nyquist plot and Root Locus?
3
How can a system be unstable if $L(j\omega)$ is never exactly $-1$?
1
Under what conditions do the phase margin and Nyquist criteria give the same results?
1
Discrepancy in stability conditions when calculating via RH criterion and Nyquist criteria
0
Calculating an in-loop signal as part of a hierarchical control loop
0
Analyze stability of a closed loop system with Bode
4
Which step response matches the system transfer function
0
Stabilizing an unstable system and removing oscillations from step response
3
How do you design using bode plots?