Let say we have a stereo recording of only one source.

So here's a diagram:

Then you know $b$ and $a+b$ and using law of cosines and Apollonius' theorem for the median of the triangle you can find $r$ and $\theta$: 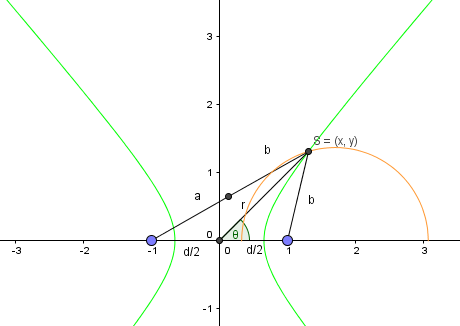 I would think that accuracy becomes smeared out when the green and orange curves meet at sharp angles.

Of course if you only care about separating sounds by location, you can ignore all this and just work in (delay, ratio)-space.

where $d$ is the microphones spacing, $c$ is the sound speed and $\tau$ is the delay.

A simple way to find what you're looking for is to compute the cross-correlation of the signals. You can do this in the frequency domain: $$ Z(w) = L(w)R^{*}(w)$$

L(w) and R(w) are the frequency spectrums for the "left" and "right" microphones. Take the inverse to get $z(t)$. Then, search for the maximum value in the magnitude of $z(t)$, and the time at which this maximum occurs will give you information on the delay between two relatively similar signals.

I will post here the algorithm I develop as I go,.

Too many things sounds nice and easy, then it doesn't go as expected.

So I would like that everyone sees what is being done and to check and recheck everything.

And, after we are done, finally an algorithm for basic acoustic localization with 2 mics will be available.

Because for now it is nowhere to be seen. A lot of works, explanations, talk about developed algorithm, but no explicit code is there that I could find.

16
How to extract vocal part from stereo audio signal?
6
Calculate Phase angle between two signals i.e. digital Phase meter
5
I trigger recording when power of current sample is X dB greater than last Y samples, what is the terminology here?
3
Stereo sound separation into three sources
0
USB microphone & interface selection
0
Calculating RMS/Crest Factor for a Stereo Signal
0
How to simulate a stereo recording?
0
How can I calculate what a recording would sound like if it was played through my speakers and mic?
1
Spatial Audio (Ambisonic) and calculating sound source position
0
How can an audio segment report an integrated loudness (LUFS) greater than 0