Suppose I have two sensors $s_1$ and $s_2$. $s_1$ measures the desired heart signal (with most of the frequency content below 100 Hz), and the other is a reference sensor picking mainly background noise.

Due to the pumping of the blood in the heart, there is also low frequency vibrations, mainly below 10 Hz that contaminates both sensors. The sensors are spatially separated, making direct cancellation unfeasible.

The figure below shows the frequency content of both sensors ($s_1$ is blue and $s_2$ is red), following discrete Fourier Transform. The visible peak is the 50 Hz mains hum. 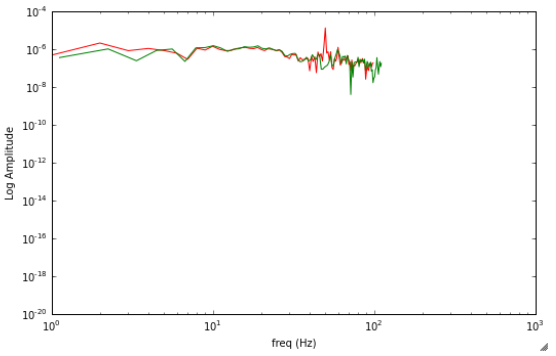 My question is how can these vibrations be removed from $s_1$, without causing too much distortion to the desired signal?

Browse other questions tagged denoising adaptive-filters or ask your own question.

7
Removing a sinusoidal artifact from a set of movie frames
1
Removing periodic spike noise from ECG signal
3
Removing Bounded Noise from an Audio Signal
2
How to Subtract One Signal from Another?
4
Removing cyclic noise from signal
2
Removing low frequencies from a signal