For all the practicing engineers out there:

Note: I am also counting interference signals as noise, so SNR can also include SIR.

In my own experience, I have seen negative SNRs in car communications. There is road noise, as well as multi-talker and music interference. I have also seen it in the output from cellular phones. Wind noise can sometimes pose a significant problem there, as well as the myriad of interferences in speakerphone mode.

I've heard rumors of covert acoustic room impulse response measurement being done during concerts. You would need the people in the room if you want to use the impulse response for artificial reverberation and you don't want the room to sound overly echoey like there's no-one in it. As received at the microphone, the signal would be a rather quiet noise-like test signal, and the music, the sounds from the people, and equipment noise would be the noise. Because the impulse response is in practice only a few seconds long, a repetitive test signal can be used. The recording would be accumulated into a circular buffer. Because noise has on average zero correlation with what has already been recorded in the buffer, its root mean square amplitude will grow on average as $\sqrt{N}$ for $N$ recording cycles, while the signal's root mean square amplitude will grow as $N$. At the end of the session, deconvolution is used to get from the test signal response to the impulse response. For a spectrally flat test signal such as a maximum length sequence (MLS), it suffices to convolve with the reverse of the test signal. For a buffer of $M$ sample points the deconvolution gain is $M$ for the signal and $\sqrt{M}$ for the noise. Combining the gains from repetition and deconvolution and assuming a sampling frequency of 44.1 kHz, we get a recording time $t$ dependent dB-scale gain difference of $20\log_{10}\left(\frac{44.1\text{ kHz }\times\ t}{\sqrt{44.1\text{ kHz }\times\ t}}\right)$ dB between the two: 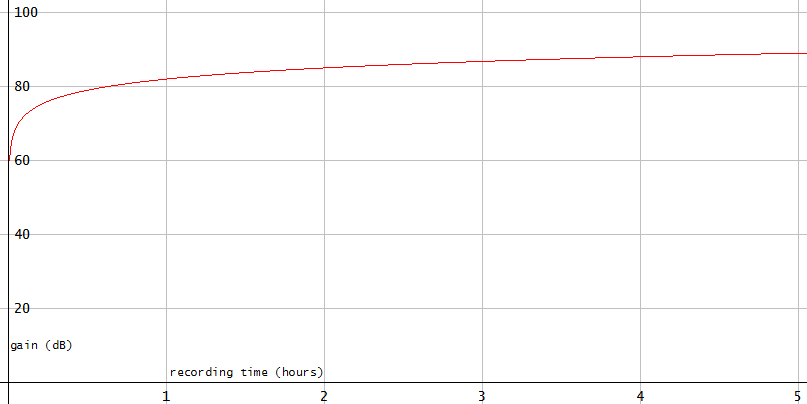 Guessing some numbers for an "easy" scenario, if we start with the signal at a sound pressure level (SPL) of 30 dB and the noise at 60 dB SPL which is a starting SNR of -30 dB, in 1 hour of recording we get a SNR of 52 dB, growing very slowly after that, by 10 dB for every 10-times increase of the recording time. 52 dB is already useful for artificial reverberation.

When I was working on SONAR data, the interesting SNR regime was -30dB to -20dB.

For this specific paper, we were trying to first find the shape of the towed hydrophone array, and then use that estimated shape to improve bearing estimation.

Figure 3 from the paper included below for illustration. 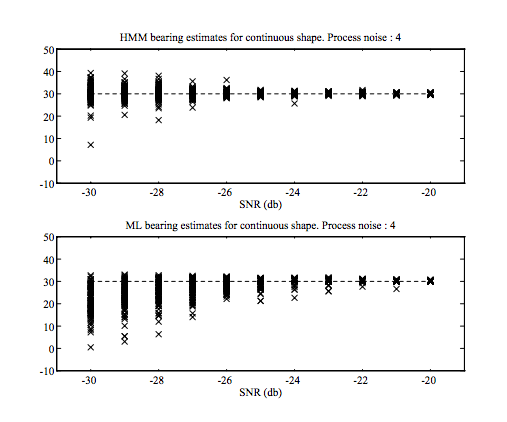 Speakerphones and things like Amazon Echo. The music from the Echo at the microphone is probably 20 dB or so louder then the voice it's trying to pick up.

Not the answer you're looking for? Browse other questions tagged signal-analysis snr or ask your own question.