Is it required to quantize wavelet coefficients before one derives features from?

Not sure of what you mean by feature extraction and what nature of signal it is.

Assuming the signal is an image and features are the texture features like GLCM (Gray-Level Co-Occurrence Matrix) and NGTDM (Neighborhood Gray Tone Difference Matrix) matrices etc. you will have to quantise the input to a manageable number of levels. I usually apply Inverse wavelet transform to the coefficients to obtain the desired image, e.g., approximation, diagonal, horizontal and vertical detail images. Then I quantise (32 bit 64 bit etc.) the reconstructed image and then derive the NGTDCM (or GLCM) matrix from the quantized input.

The global answer is no, it is not mandatory. Yet weak forms of quantization (of values and locations) may help, like absolute values and range compression.

First, wavelet coefficient values can be complex. Wavelet transform are usually linear, and are often shift-variant. If you want a classification that does not depend on data sign or phase, and on (some) offsets, ie if you want the same class for:

at least you need to take an absolute value, one of the weakest form of quantization.

Then, depending on what classification you are used, it is not mandatory. You can for instance fit a distribution to wavelet coefficients in each subband, and use the distribution parameters for clustering, without further quantization. For instance, generalized Gaussian-Laplacian distributions were once considered a good fit for wavelet coefficients, see for instance Wavelet-Based Texture Retrieval Using Generalized Gaussian Density and Kullback–Leibler Distance. The following plot is taken from a paper related to adaptive filtering, however this generalized Gaussian modeling from wavelet frame decomposition with different power laws may apply to classification too. 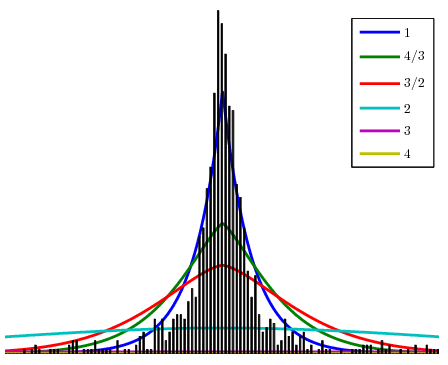 More generally, range compression, like applying a power-law (Box-Cox, Anscombe transformations) to absolute wavelet coefficients, is often used to set thresholds, that are another form of classification.

The last quantization we often do not think about is location. We previously talked about values only. But you can gather wavelet coefficients in vectors or blocks, packed into a "Reference Observation Vector", and compute statistics on them, that will be used for further processing.