How to deal with low fundamental when using AMDF for pitch extraction?

I am using the Average Magnitude Difference Function to estimate the fundamental frequency of a quasi-periodic audio signal. The AMDF is defined as

where $N$ is the length of the signal. This function exhibits a minimum when the signal is shifted by an amount equal to its period.

This is the code I am using to extract the pitch (in Matlab):

However, I am dealing with an audio signal where the fundamental frequency is very low: 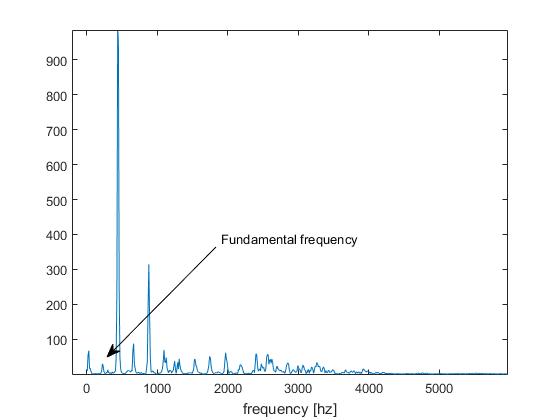 As a consequence, a pitch doubling problem arises: the detected minimum corresponds to half the period of the signal (i.e. the second harmonic): 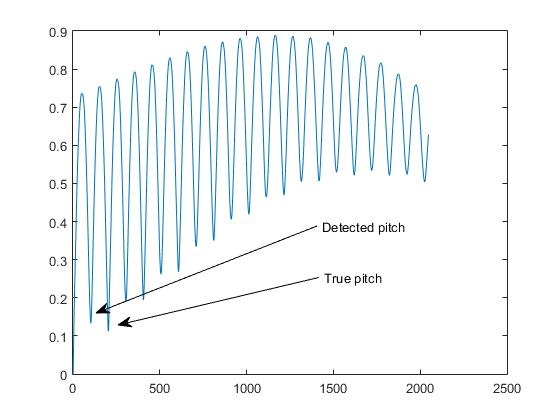 I tried to extract the largest peak and not just the first, but sometimes this problem remains. How can I improve my code and/or the AMDF function in order to deal with low fundamental?

This is what we call in the pitch-detection biz, the "octave problem".

First of all, I would change the AMDF to ASDF. And I would not reduce the window size as the lag increases. (Also, I am changing notation to what I consider to be more conventional. "$x[n]$" is a discrete-time signal.)

The Average Squared Difference Function (ASDF) of $x[n]$ in the neighborhood of sample $x[n_0]$ is:

Now, expand the square and consider what the summations look like as $N \to \infty$ (not that $N$ is going to infinity, but to give you an idea if $N$ is large). The ASDF is directly related to the autocorrelation. It is essentially the autocorrelation turned upside down. These steps I will leave to you. take a look at this answer.

So now consider this finite-length "autocorrelation" (in the neighborhood of sample $x[n_0]$) defined from the ASDF:

Another useful way to look at this autocorrelation taking place in the neighborhood centered at sample $x[n_0]$ is to normalize $R_x[k, n_0]$ with $R_x[0, n_0]$:

Suppose for a minute that $x[n]$ is periodic with period $P$ (and $P$ happens to be an integer), then

We can then expect that the value of the normalized autocorrelation, $r_x[k,n_0]$ evaluated at a lag of $k=P$ or other multiples of $P$ should be pretty close to 1. That value $r_x[P,n_0]$ can be thought of as a measure of the degree of periodicity (sometimes called the pitch confidence) of the estimated period $P$ for the quasiperiodic $x[n]$ in the neighborhood of $n \approx n_0$. If $r_x[P,n_0]=1$, we can say that $x[n]$ is perfectly periodic with period $P$. If the best $r_x[k,n_0]$ you can get (with $k$ that's not close to $k=0$) is very small, then $x[n]$ shows no periodicity and your pitch confidence is low.

So the octave problem comes about because of a couple of reasons. First of all, $P$ is not necessarily an integer. That is an interpolation problem, not a big deal.

The second reason and more difficult problem is that of subharmonics. Consider that you're listening to a nice periodic tone at exactly A-440 Hz and it sounds like an A that is 9 semitones above middle C. Now suppose someone adds to that tone a very tiny-amplitude (like down 60 dB) A-220? What will it sound like and mathematically what is the "true" period?

Choosing the "right" peak for the period.

If $x[n]$ was "quasi-periodic", one cycle of $x[n]$ will look a lot like an adjacent cycle, but not so much like a cycle of $x[n]$ farther down the signal in time. That means the first peak $R_x[P, n_0]$ will be higher than the second at $R_x[2P, n_0]$ or the third $R_x[3P, n_0]$. One could use the rule to always pick the highest peak and expect the highest peak to always be the first one. But, because of inaudible subharmonics, sometimes that is not the case. sometimes the second or possibly the third peak is oh-so-slightly higher. Also, because the period $P$ is likely not an integer number of samples but $k$ in $R_x[k, n_0]$ is always an integer, so the true peak will likely be in-between integer values of $k$. Even if you were to interpolate where the smooth peak is (which I recommend and quadratic interpolation is good enough), and how high it really is between integer $k$, your interpolation alg could make a peak slightly higher or slightly lower than it really is. So choosing the absolutely highest peak can result in spuriously picking the second over the first peak (or vise versa) when you really wanted the other.

So somehow you have to handicap the peaks at increasing $k$ so that the first peak has a slight advantage over the second, and the second over the fourth (the next octave down), etc. How do you do that?

You do that by multiplying $R_x[k, n_0]$ with a decreasing function of $k$ so that the peak at $k=2P$ is reduced by some factor, relative to an identical peak at $k=P$. Turns out that the power function (not the exponential) does that. so compute

So, if $x[n]$ were perfectly periodic with period $P$, and ignoring interpolation issues for non-integer $P$, then

That is the consistent way to weight or de-emphasize or handicap the peak corresponding to the subharmonic pitch one octave below.

It still leaves you with a thresholding issue. You have to choose $\alpha$ well. But this is a consistent way emphasize the first peak over the second, which is an octave lower, but not so much that if the note really is an octave lower, but the energy in all of the even harmonics was strong, compared to the odd harmonics, this will still leave a possibility for the second peak being chosen.

Heuristically, the fundamental frequency of voiced speech will lie in the interval [70, 400] Hz. So, the first step would be to apply a bandpass filter to approximately isolate that band.

Not the answer you're looking for? Browse other questions tagged audio pitch fundamental-frequency or ask your own question.

0
What's the state of the art way to detect / change audio pitch?
11
What is an AMDF?
4
How can I measure the harmonicity of an audio spectrum?
5
Advice on autocorrelation via FFT
3
periodicity coefficient
3
pitch detection: which is the most robust way to distinguish voiced from unvoiced audio
2
Using Fast Fourier Transform to determine musical notes
3
Pitch detection, YIN, pYIN
3
How to prevent Octave Jumping in ACF of Speech Signal?
2
harmonic product spectrum on guitar string signals
See more linked questions