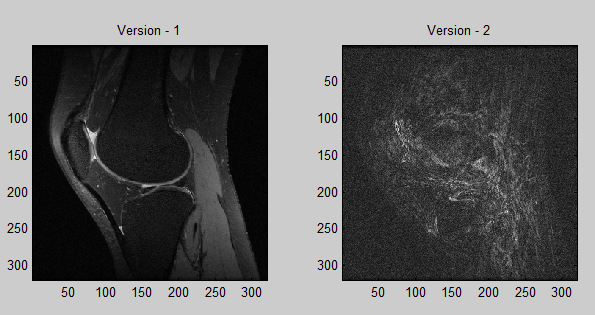 I thought both versions will reconstruct the same way. But images appeared different. How can I take kspace data corresponding to one slice and perform inverse transform to reconstruct slice image?

The two reconstructions are both valid in general. In MRI images can be acquired in multiple 2D slices and as a 3D volume.

When data is acquired in slices, you would take the 2D Fourier Transform of the k-space of each slice (and each channel, if it is a multi-channel coil). Then you would sum the channel data up in a Sum of Squares fashion as you did. The result would be the reconstructed slices.

When data is acquired in a true 3D mode, you do not have separate k-spaces, but only one big k-space. To reconstruct this data, you would do a 3D Fourier Transformation of your k-space (and do so separately for each channel, if the coil had multiple channels). After a Sum of Squares summation of the channel, you have reconstructed the whole volume.

Note that you cannot replace a 3D FFT by applying 2D FFTs for each slice. That is why your second reconstruction failed. Look at an orthogonal "slice" to what you have shown - you will clearly see the typical k-space modulation with the maximum intensity in the middle.

Not the answer you're looking for? Browse other questions tagged matlab ifft or ask your own question.