The figure shows the pole–zero plots for three different causal linear time-invariant systems with real impulse responses. Indicate which of the following properties apply to each of the systems pictured: stable, IIR, FIR, minimum phase, all pass,linear phase, positive group delay at all $w$: 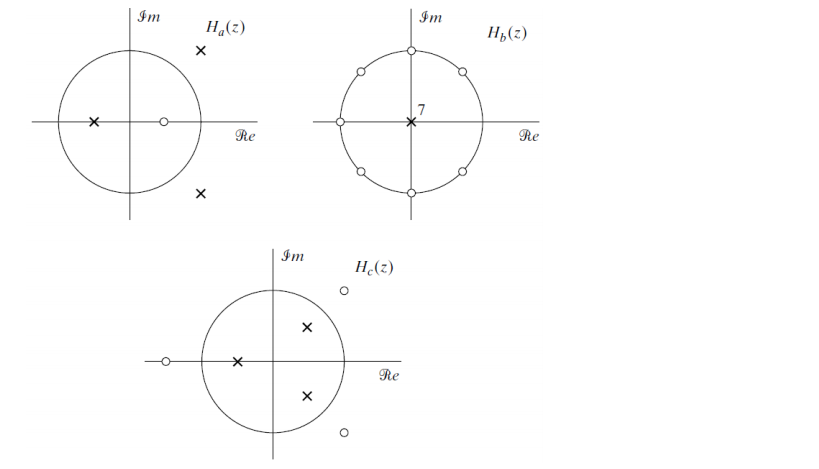 I am having problems specifically finding out if the system is linear phase and has a positive group delay, and all pass or not.

In the first plot: the system is stable since we have a region of convergence containing the unit circle, and FIR because it is stable, and minimum phase because we have a pair of complex conjugate pairs.

And so on with the other figures...But I still cannot quite figure out how to determine the other properties given the pole-zero mapping.

Ok, so I've gotten to this point: Plot 1 is not stable because the ROC doesn't contain the unit circle and since all zeros are in the unit circle, we have a minimum phase system. Additionally, we have a IIR system because of the 3 poles so we have feedback. Its also not an allpass filter because poles and zeros are not reciprocals of each other. I hope those are right and I understand the concept so that I can continue with the other plots. But, I'm really having difficulty trying to find out if the system is a linear phase system or not and if it has a positive group delay. I know that linear phase translates in delay in time for all frequencies by the same amount and that group delay $\tau_g = -d\theta(w)/dw$.

Thanks in advance guys.

I will not do the homework for you, but I'll make a few comments on your observations to clear up some of your misconceptions. Concerning the first plot (top left I suppose) you wrote:

This would be correct if the system were non-causal (i.e., with a two-sided impulse response), but since - according to the first sentence in the question - the system is causal, it can't be stable if it has poles outside the unit circle.

This is wrong. What you're saying is that any stable system is FIR, which is definitely not the case. Of course there are stable IIR filters. Here you'll have to do some more studying to learn what stability means and to understand that it is not necessary (only sufficient) for a stable system to be FIR.

That's also wrong. The fact that a system has complex conjugate pairs of poles and zeros has nothing to do with the minimum-phase property. You need to read up on minimum-phase systems. They can be inverted by a causal and stable system. What does this tell you about its zeros? Any system with a real-valued impulse response has either real-valued or complex conjugate pairs of poles and zeros. That's because $H(z)$ is a real-valued function of a complex argument.

Not the answer you're looking for? Browse other questions tagged filters linear-systems digital poles-zeros or ask your own question.

35
What is the true meaning of a minimum phase system?
2
Criteria to distinguish FIR and IIR filters from difference equation?
0
When do we have a minimum phase couple
0
Why does a pole close to the unit circle result in an enhanced Q-factor?
1
Question about poles and zeros in AR filter
5
Pole-zeros of a real-valued causal FIR system
0
Using ROC to find stability of system in specific example
1
When is a LTI IIR $H(z)$ system minimum phase