I have an exam next week and it's verty certain that a task of this kind will be there.

Are there some good tips how to match the right pole zero plot to the right responses? No proof is needed in the task.

At the moment I try to find two of the same kind and kinda guess which of the two same looking responses could be which.

What I know so far for the impulse response:

For the magnitude response: 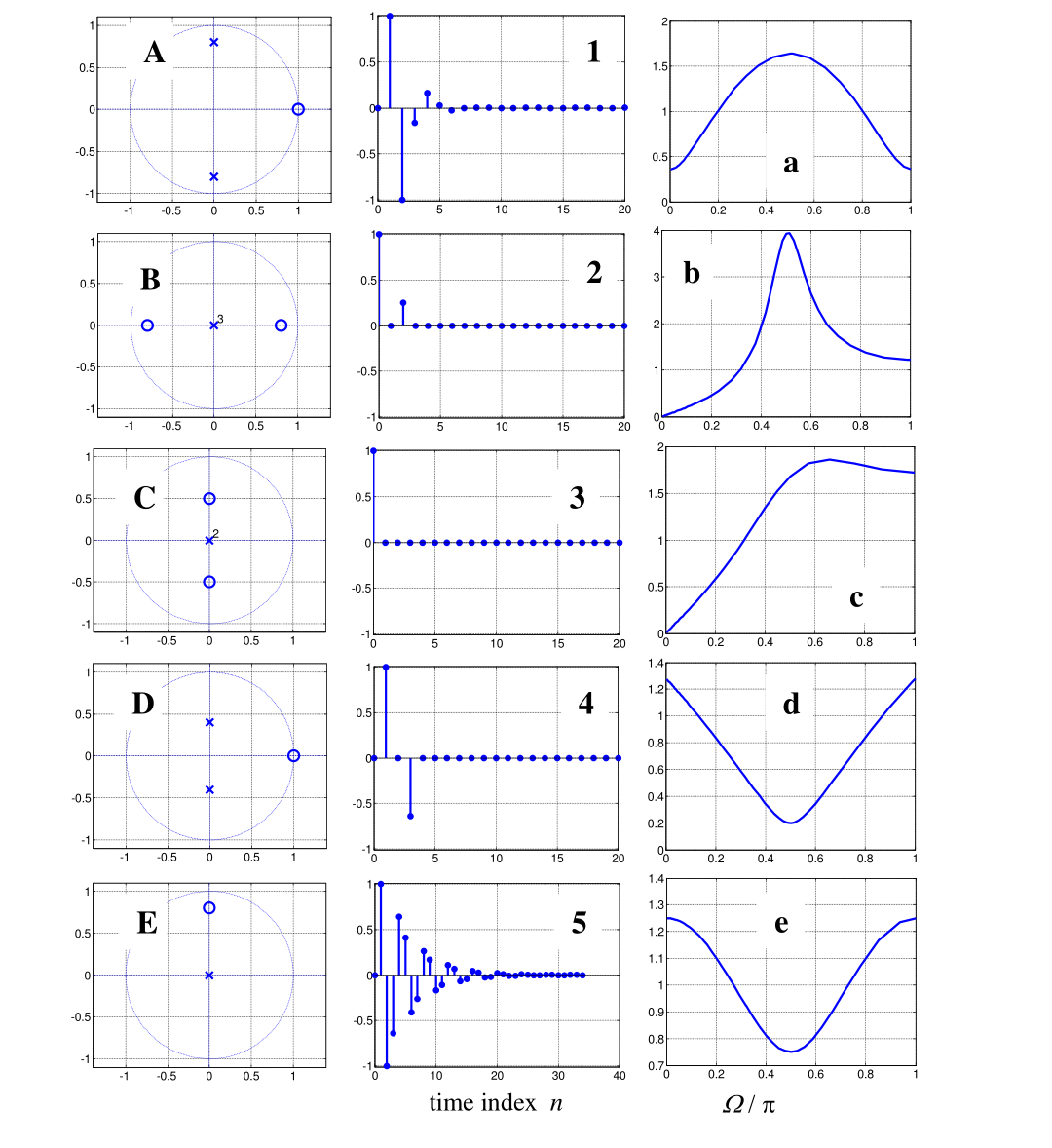 For A: zero at z=1, and complex poles, so it has to be one of the oscillating impulse responses: 1 or 5. D has the poles closer together so it oscialltes less, so D is probably 1 and A is 5.

For B Zeros are symmetric so magnitude response is probably symmetric.

For D See A

For E No idea, should have a dirac at 0, but no oscillation?

Really unsure about the magnitude responses.

Some of the cues you want to look for are the following:

For PZ-plot A, the magnitude response must be zero at DC and it must peak at $\pi/2$ (i.e., at $0.5$ in the magnitude plot). The impulse response (IR) must be oscillating and its values must add up to zero (which you can of course check only approximately). Furthermore, since there are two poles and only one zero, the first IR coefficient must be zero. So we are left with IRs 1 and 5, and with magnitudes b and c. Since we have a PZ-plot which is qualitatively the same as A (namely D), just with a smaller pole radius, we can easily guess that the peakier magnitude and the more slowly decaying IR correspond to A, whereas the others correspond to D. So we get

PZ-plot B must be FIR (all poles in the origin), and the first coefficients must be zero (3 poles, only 2 zeros). The magnitude must be symmetrical with respect to $\pi/2$ ($0.5$ in the magnitude plot), and there must be (equal) dips at DC and at Nyquist. Only magnitue plot "a" satisfies these criteria. The only matching finite IR is "4". So we have

This would leave us with

but the latter is non-sense, as I've mentioned in my comments. The PZ-plot E corresponds to a finite IR, but that IR must be complex valued. From the plot, let's estimate the zero at $0.8j$, which gives us

with an arbitrary scaling constant $c\neq 0$. This corresponds to an impulse response

Not the answer you're looking for? Browse other questions tagged impulse-response z-transform magnitude poles-zeros or ask your own question.