I am using a Kalman filter to fuse gyro and inclinometer data. The prediction step is given by:

Where $\hat{\alpha_{i}}^-$ is the prediction for the angle, $\hat{\alpha}^+_{i-1}$ is the previous a-posteriori state estimate and $\omega_i$ is the change in angle measured by the gyro. The innovation of the filter is given by:

where $\alpha_i$ is the current measurement of the inclinometer. As far as my understanding of the Kalman filter goes, the innovation is expected to have a zero mean. However, the following Figure shows the histogramm for some 25000 datapoints of the innovation: 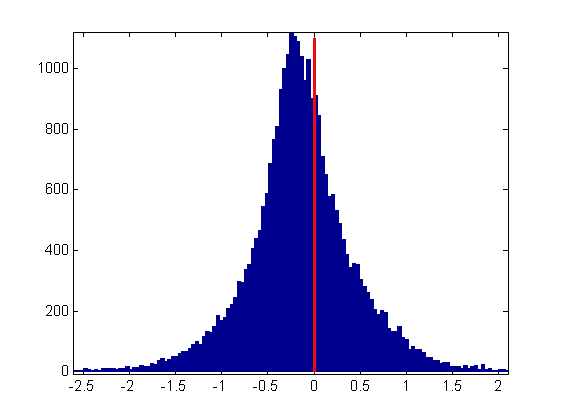 The mean is obviously non-zero. Would it be correct to claim that this means that some error source is present, for example an uncorrected gyro offset? Or is the non-zero mean more an "academic" property of the filter, can't be expected to be true in a real-world implementation, and thus a non-zero mean should not be overrated?

Mean of innovation sequence is zero if the Kalman filter is optimal. A non zero mean implies that there are certain errors present in your assumptions of covariance of noise or even your system matrices(if you are using a state space model).

1
Kalman Filter Estimate vs ACF Least Squares Estimate
13
Will an Unscented Kalman Filter Be "As Good" as Other Optimization Algorithms for This Problem?
8
How do I choose the parameters of a Kalman filter?
7
Fundamental questions about state-space and Kalman filters
3
Deriving a Kalman Filter Equation for a Linear Gaussian Filtering Model with Non Zero Mean Noise