Phase response of moving average filter -- how to interpret?

There are many articles on the frequency response of the moving average filter but they all seem to focus on magnitude. However the phase response is intriguing and I find it hard to interpret. The phase appears to "wrap", but it wraps within the [-pi, pi) interval rather than at its edges. Example below: 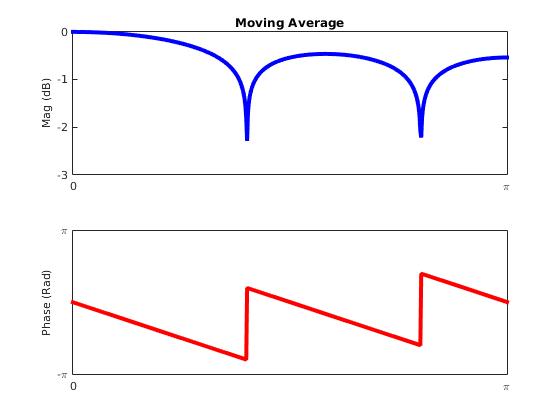 A phase unwrapping algorithm would not resolve this, so it is really a "pseudo-wrap". Further, if I add taps to the moving average, it flattens this process out, so I suspect that mathematically, the moving average filter will never reach 0 or 2 pi, though I have never seen an explanation why. Example of an 11-tap: 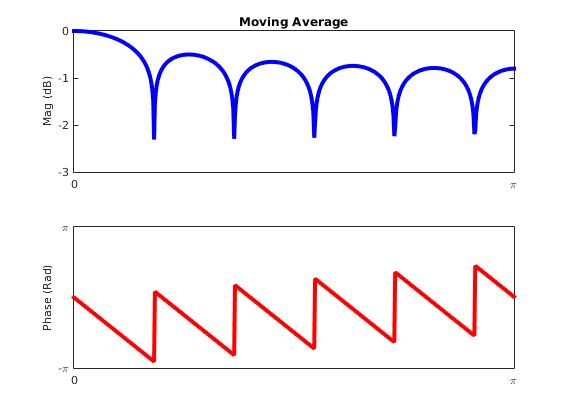 I find this behaviour fascinating and would be interested in the interpretation of an expert. Does this suggest that features will be distorted at certain "weak spots" in the frequency response? Is it correct to call the phase of a moving average filter "piecewise-linear" rather than linear? I suspect not, given that symmetric FIR filters are analytically shown to have linear phase, but I have a hard time calling this linear.

Note that $A(\omega)$ is not the magnitude of $H(\omega)$, but it is a real-valued amplitude function, which takes on positive as well as negative values. The phase $\phi(\omega)=-(N-1)\omega/2$, as defined in $(1)$, is obviously linear. That's also the common definition when we talk about a linear phase response.

Not the answer you're looking for? Browse other questions tagged frequency-response moving-average linear-phase or ask your own question.