How to obtain impulse response from the differential equation of a system?

This year I'm having trouble with my Signals and Systems class. My major subject is Software Engineering and Electric and Electrical Engineering is my Minor. This question was my previous exam question but I coudn't write anything about it as a solution. If somebody could at least show a way to solve this problem it would be great.

EDIT:
Here is what I have done so far. 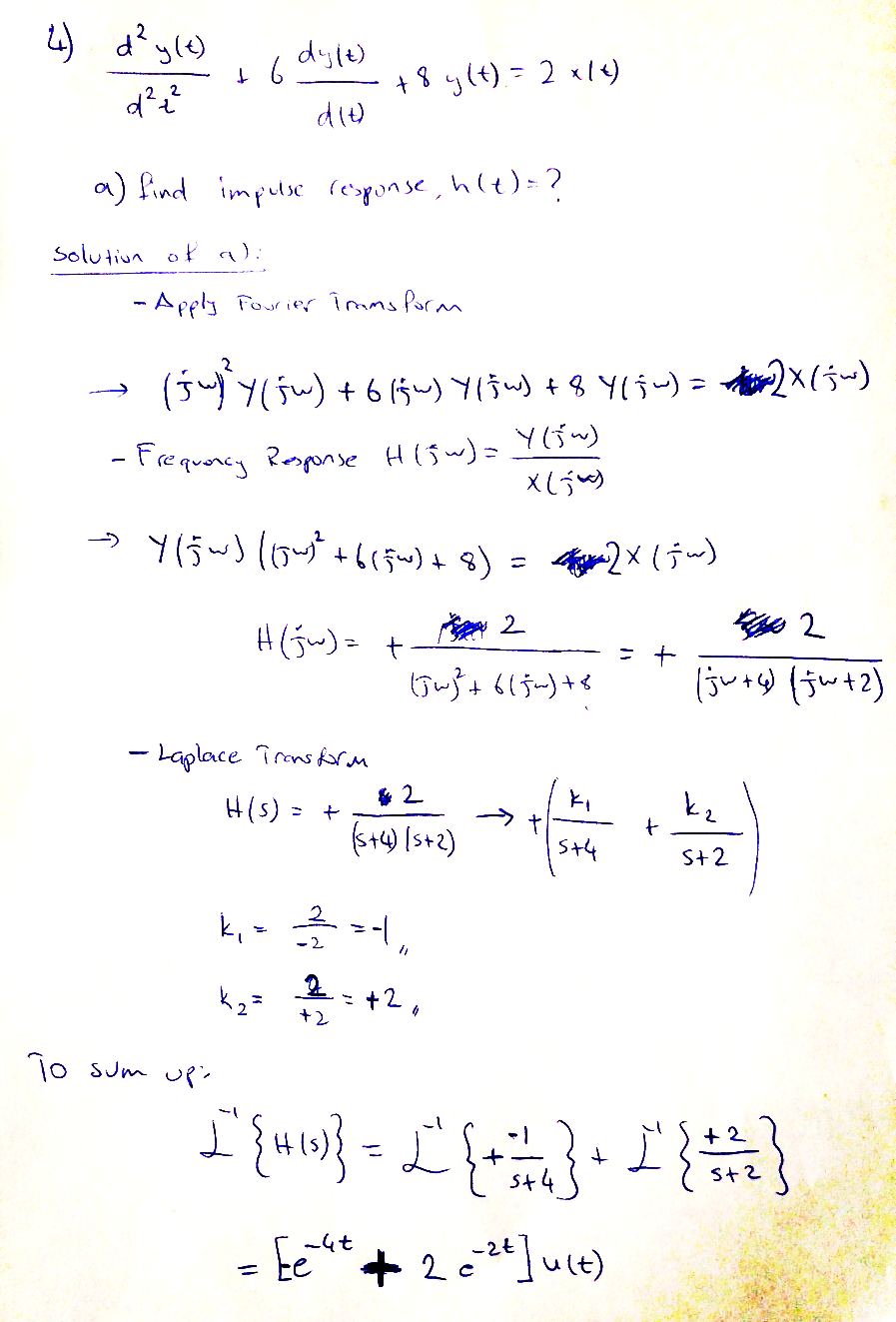 It looks like your transfer function is correct, but there's a small mistake in your partial fraction expansion:

The corresponding impulse response is

The response to $x(t)=te^{-2t}u(t)$ is indeed most easily computed by solving the convolution integral:

I leave the exercise of solving $(3)$ up to you, but if I'm not mistaken the result should be

Note that the input $x(t) = \delta(t)$ is formally a problematic signal (function) and therefore mathematically oriented classical books on ODEs, do generally avoid any discussion of such functions and their solutions, unless the scope of the book specifically includes generalised functions (distributions), usually to be used in some engineering or physical fields.

The procedure: Consider an LTI system which is causal with initial rest conditions. We say that when the input to this system is $x(t)=\delta(t)$ an impulse, then its output $y(t)=h(t)$ is the impulse-response of the system. We find this solution $h(t)$ in two steps, by breaking the LCCDE into two parts as inspired by a serial (cascade) implementation of two LTI systems corresponding to the right and left sides of the LCCDE.

Remember that this system was defined to be under inital rest with complete zero inital conditions prior to the application of any excitation. Hence if we were to solve the homogeneous solution $y_h(t)$ for an ordinary (formally valid) input signal $x(t)$ to the system, the homogeneous solution will be identically zero, as the initial conditions would all be. (all the coefficients $A_k$ of the exponential terms turn out to be zero). But the magic of the generalised input $\delta(t)$ is that it will set one of those inital conditions to non-zero, thereby, enabling a non-zero homogeneous response to exist, which will become the solution of the part-I as well.

From this information you can proceed to solve the algebraic equaitons as usual and find $h_0(t)$ from which you can compute the impulse response $h(t)$ for all $t > 0$. What happens for all $t <0 $? As we stated, this system was LTI and causal with initial rest condition. For such a system if the input $x(t)$ is zero for all $t<0$ then that output is also zero for all $t<0$ which is achieved by multiplying $h_0(t)$ via $u(t)$ to represent the solution of Part-I for all t.