Are there equations for placing sounds in the stereo field using delays?

I'm thinking of the typical stereo widener (haas, binaural) effects here, those that extend from the typical pan knob to create "out of the headphones" -experience.

These processors can be automated to move sounds around, but I was wondering whether there was mathematics that described how to set the delays in order to move the sound into a certain spot in an angle -like fashion.

Such as in this plug-in: 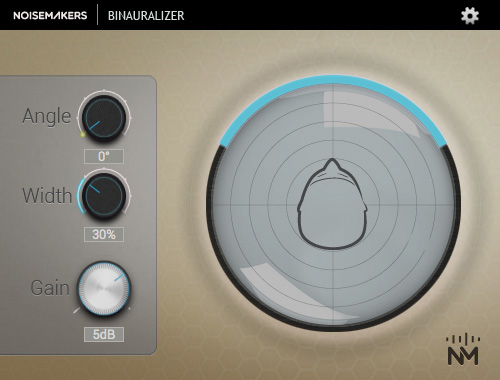 What about modelling the "distance" from the listener?

For a spherical head with the ears at opposite points on its surface, a planar wave from a distant sound source reaches an ear on a straight line through air or if blocked by the head then partially through the shortest path along the surface of the sphere. If the sound source is at the same vertical coordinate $z$ as the ears, we can think of the head as a circle on the $x, y$ plane: 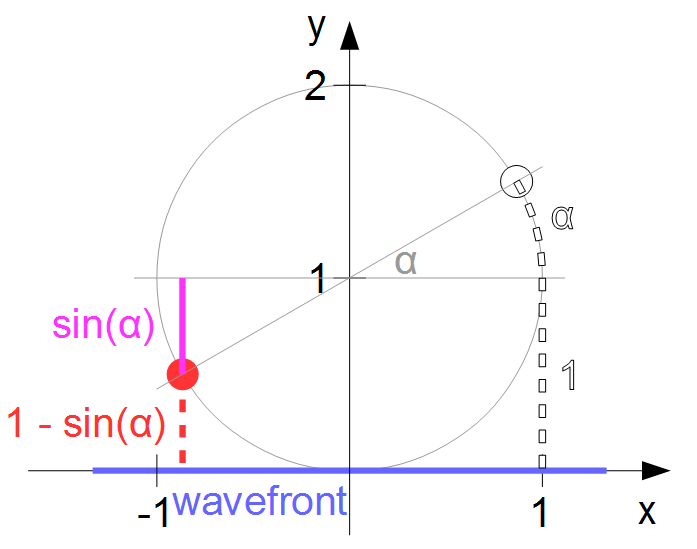 For simplicity, the head is a unit circle centered at $x = 0, y = 1$, turned so that the nose moves by an angle $\alpha$ counterclockwise from the origin. We are looking for the distances the sound still has to travel after the planar wavefront first reaches the head. There is a shortest straight line path (red dashed) of length $1-\sin(\alpha)$ to the right (red) ear. The shortest path (white dashed) to the left (white) ear consists of a straight line segment of length $1$ plus a curved path of length $\alpha$. The difference between the lengths to the two ears is $\alpha + 1 - (1 - \sin(\alpha)) = \sin(\alpha) + \alpha$. This holds for $0 \le \alpha \le \frac{\pi}{2}$, but because the function is antisymmetrical, it applies also to $-\frac{\pi}{2} \le \alpha \le 0$ giving a negative value for that range. 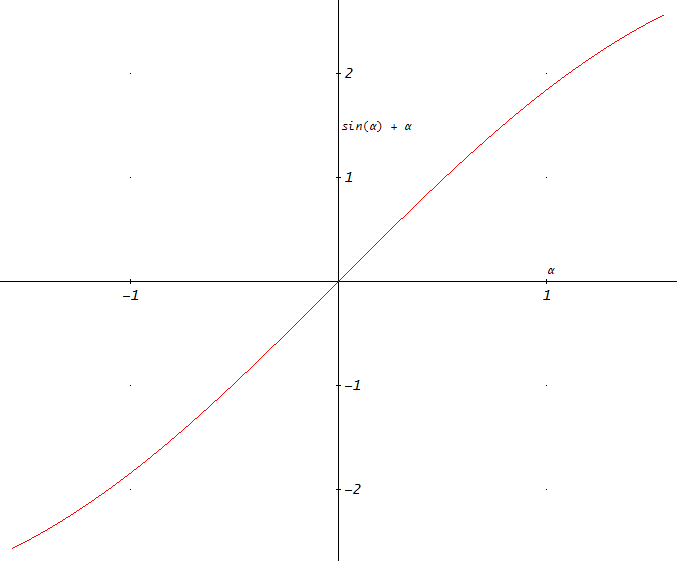 Modifying the equation to include the speed of sound $c$ and the head radius $r$, the inter-aural time difference (ITD) turns out as:

If one wants to take into account the distance to the source, the wavefront becomes spherical, or circular on the $x, y$ plane. Let's look at a head with just one ear considered: 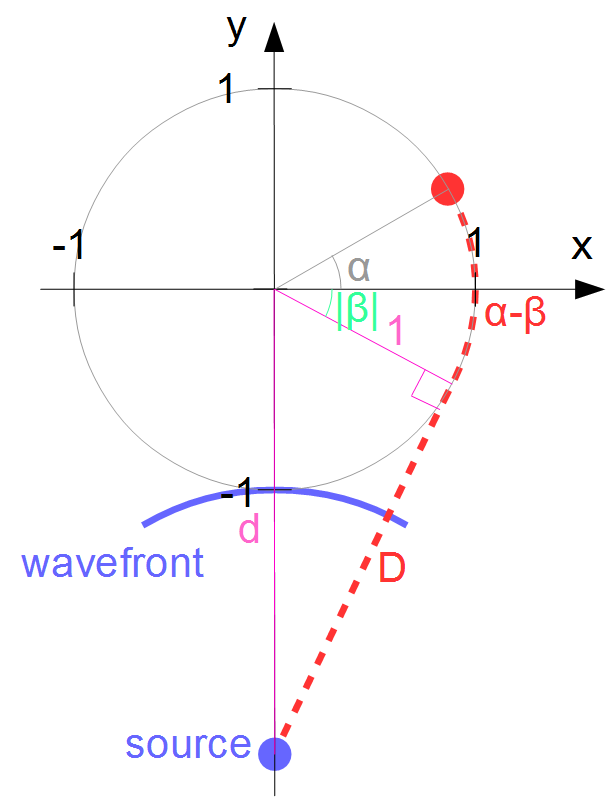 The head is again a unit circle, but this time centered at the origin. The source (blue) is on the negative $y$ axis at a distance $d$ from the center of the head. The ear (red) is rotated by an angle $\alpha$ counterclockwise from the positive $x$ axis, or clockwise if $\alpha$ is negative. We shall constrain $-\frac{\pi}{2} \le \alpha \le \frac{\pi}{2}$ so that the shortest air path to the ear is always via the right side of the head as pictured. At the time the sound first reaches the head, the wavefront (blue) is cicular with radius $d-1$. We don't need that for the calculations, because we can use the time the sound leaves the source as the starting point. There is some negative angle $\beta$ such that if $\alpha \le \beta$, there is a direct air path of length $\sqrt{\cos(\alpha)^2 + \left(d + \sin(\alpha)\right)^2}$ to the ear located at $x = \cos(\alpha)$, $y = \sin(\alpha)$. Otherwise the sound travels a distance $D = \sqrt{\cos(\beta)^2 + \left(d + \sin(\beta)\right)^2}$ to the point $x = \cos(\beta)$, $y = \sin(\beta)$ where the straight path and the circle meet tangentially, and transitions to a further curved path of length $\alpha-\beta$. There is a right triangle (pink) that enables to solve $\beta$ using the pythagorean theorem:

To recap, modifying the equations to include head radius $r$ and speed of sound $c$:

For increasing distances, this definition of ITD approaches the previous one: 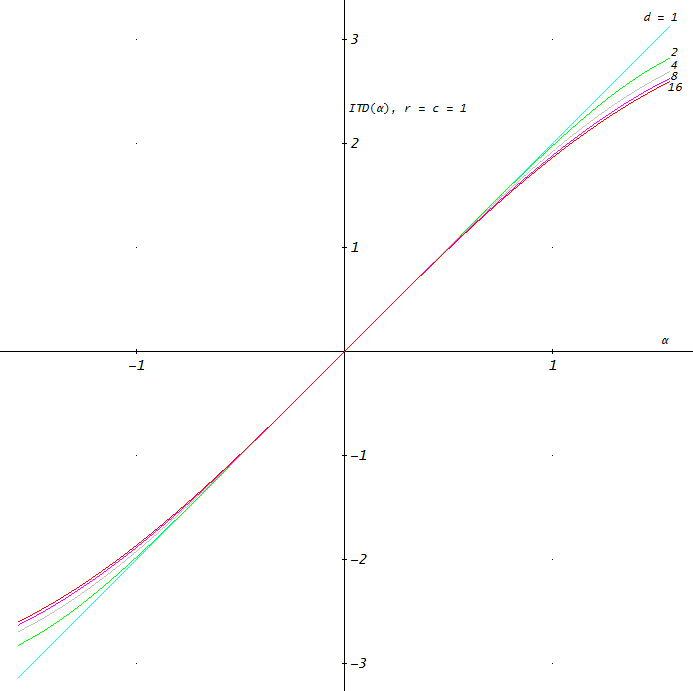 Typically simplistic models for don't work very well and don't result in externalization (out of head localization). The diffraction effects are quite complicated and at higher frequencies the details pinna (ear lobes) and shoulder reflections are quite relevant. Interaural time and level differences are also highly frequency dependent.

It's much more effective to use measured HRTFs (Head Related Transfer Function). Some sets are available in the public domain for non-commercial use. Even better work individualized HRTFs, i.e. HRTFs measured with your own head and ears. It's actually not that hard to do.

Using real HRTFs will easily allow for externalization on the sides but it's still not great for median plane (up/down, front/back) and people often report in-head localization for frontal sources. The best way around this is head tracking, i.e. measuring the listeners head movements and updating the HRTF's in real time accordingly. That's pretty complicated though.

Not the answer you're looking for? Browse other questions tagged audio delay or ask your own question.

11
What are the basic categories of operations performed on audio signals to create interesting sounds?
0
Is there any example or existing resource for using matlab in audio comparison (cross correlation)?
2
Are there any measurements or test for whether an audio signal is stationary?
4
Are there libraries for extraction of sound wave features?
4
Are there other filter models besides IIR and FIR for processing digital signals?
1
What are the steps for applying a 50% Overlap to an FFT?
1
Is there any relation between mono/stereo recording and the peak frequency of sound detected?
1
What are the differences in overtones for hard vs soft materials?
0
what Graphical DSP programming tools are there for ASIO4ALL?
0
Searching for an algorithm that can detect the stereophonic recording method used for a given stereo recording