I have implemented a simple V.23-like FSK modem in C here.

The peculiarity of the chosen modulation is such that 0's and 1's are sent as tones of two different frequencies (2100 Hz and 1300 Hz respectively) and the duration of each symbol is 1/1200th of a second, which is between one and two full periods of the symbol tone frequency.

The band-pass filter that I used in the receiver is from about 875 Hz to about 2350 Hz. This range was determined empirically.

The question is, how do you calculate this frequency range for a signal like that from the tone frequencies and symbol duration?

If I try to apply this logic directly to my case, then I should expect the bandwidth of my FSK signal to be the union of:

Or, if I plug in the numbers, the union of:

EDIT2: Here's the spectrum as I'm seeing it in Audacity: 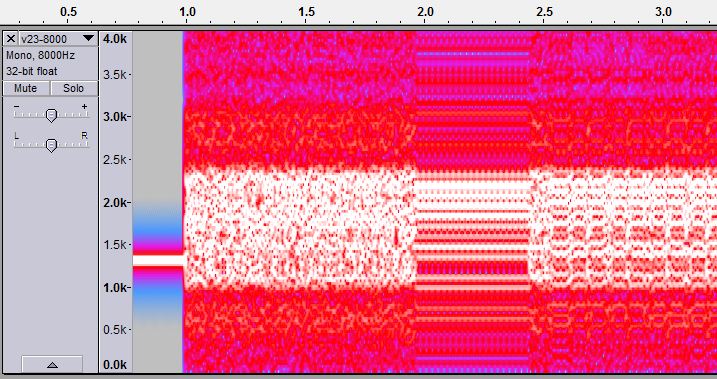 frequency-spectrum modulation fsk
Share
Improve this question
edited May 23, 2017 at 12:41

With Frequency Shift Keying, the modulation (digital data) takes up bandwidth, so you can't just keep only the frequencies of the mark and space tones. A firm lower bound on how little bandwidth you can use is the distance between the mark and space frequencies, plus half the baud rate on either side. So for 1200 baud with frequencies of 1300 hertz and 2100 hertz, the absolute minimum bandwidth is (1300-(1200/2)) [700 hertz] to (2100+(1200/2)) [2700 hertz] which is a bandwidth of 2 kHz. People have tried to filter it tighter but if the reception still provides the correct data, it is only because of chance. Usually there is also some pulse shaping in the FSK signal before modulation to make the filter's job easier.

You design and use bandpass filter to filterout noise and unwanted signal out of band. Since your signal has two components: 1300 Hz and 2100 Hz, your bandpass filter has to pass these frequencies. However since your actual signal has some side lobes, you can not practically generate signal that has only these two frequency components, then you need some gaurd band on both sides of these frequencies. It ooks the gaurd band you have chosen in non symmetric, you could choose a filter with pass band frequency of 1000 Hz to 2400 Hz for example.

Not the answer you're looking for? Browse other questions tagged frequency-spectrum modulation fsk or ask your own question.