I am trying to estimate the position & head direction of a rodent going through a 2D environment (a circular surface of 1m radius). Above his head is an overhead camera which records 4 LEDs mounted on his head. The position is calculated as the centroid of the LEDs positions and the head direction as the angle of the LEDs (see images).

The issue is that wires attached to his head occasionally occlude 1-4 of the LEDs and thus prevent/complicate measurement. Furthermore, the head direction estimation is particularly subject to lots of noise due to nonhorizontal head movements which add a 3rd dimension to the LED movements which are assumed to be parrelel to the surface (thus introducing a sort of parallax).

I thought a kalman filter would be a great way too smooth this data. However, in Matlab it seems that to implement this I would need to assume either constant acceleration or velocity which is not the case since the rodent is freely moving.

Is a standard Kalman filter still possible? Maybe a nonlinear (extended) KF? Are there any other better solutions?

Rodent in a square environment. I included this image since here the overhead wires and LEDs are more easily visible 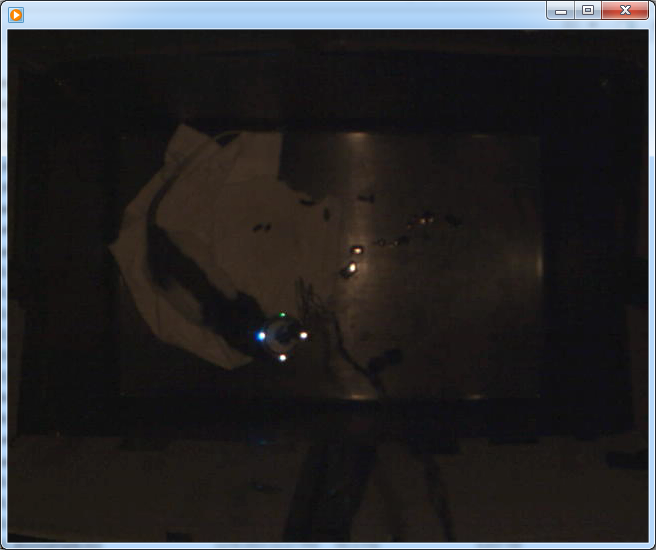 Rodent in the circular environment. Notice that 1 of the LEDs (green) is occluded by the wire: 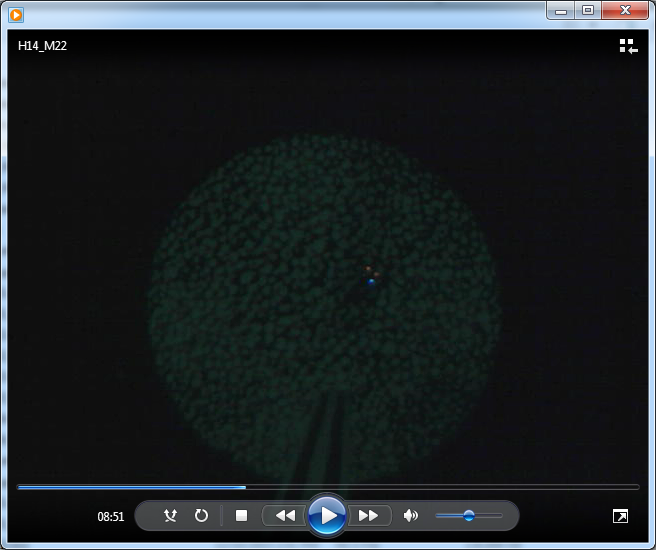 So this is just the start of an answer. I'll have to keep updating it as I go.

The first attempt is to say that the quantities you are interested in are the location of the center of the four LEDs, and the roll, pitch, and yaw (rotation angles) of the LEDs.

For now, I'm assuming that we are not interested in estimating velocity, $v_k$., or acceleration, $a_k$.

The idea where would be to make $Q_k$ time varying so that, when an LED disappears, the entries in the $Q_k$ matrix associated with those measurements have extremely large variances (meaning we are very unsure where the LED is). That should make the update just (effectively) keep the previous value with a minor update based on the new state estimate from the locations of the LEDs we CAN see.

In any event, it looks like your filter is going to be an extended Kalman filter (EKF) rather than a straight Kalman filter if we pursue this route.

The other option would be to use $(x^i_k,y^i_k)$ as the state variables so there's a more direct relationship between them and the measurements. However, then I'm not sure how to apply the fact that the four LEDs are in a set relationship to each other.

This is taking way longer than I expected, so I thought I'd just let you know I am trying to work on it...this week (and last weekend) were a dead loss for non-critical stuff.

The code below mainly just attempts to model the original measurements. No real attempt is made to use the EKF to do the estimation. Just using the mean location of the LEDs is currently all that it does.

Picture of an example track is below.

I'll try and get the EKF version going, but we'll see how this weekend goes. 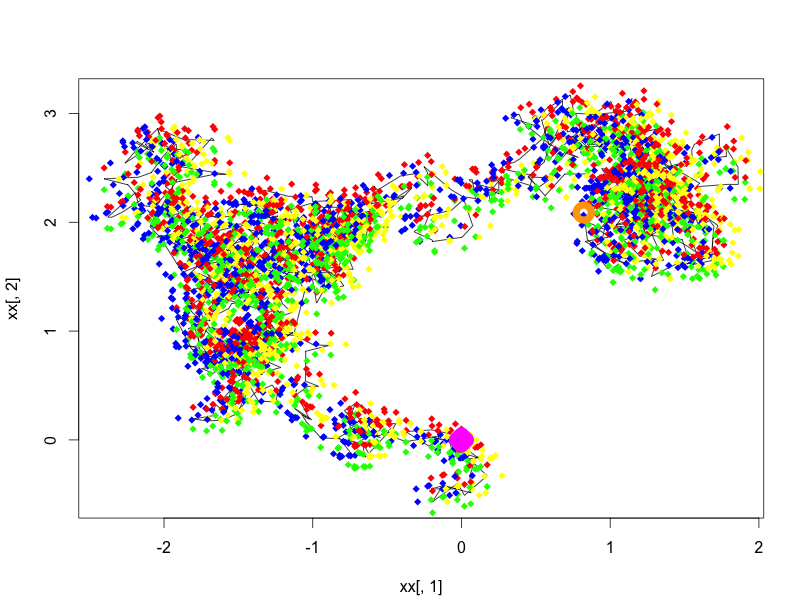 However, in Matlab it seems that to implement this I would need to assume either constant acceleration or velocity which is not the case since the rodent is freely moving.

First of all you can choose any dynamic model not only constant acceleration or velocity. Secondly, In Kalman filter you don't need to have exact dynamic model. consider state dynamic equation

With your prior knowledge about the dynamic model of the system you specify transition matrix $\mathbf{F}$ and your uncertainty about this model is captured by the dynamic noise vector $\boldsymbol{\nu}$ which is a zero-mean multivariate Gaussian with covariance matrix $\mathbf{R}$. The more uncertain you are about $\mathbf{F}$ the larger the $\mathbf{R}$ you have to choose. The constant velocity or acceleration models are just the most basic dynamic models reflecting the nature lows of kinematics and most of the times they are good enough if you don't choose very small or very large $\mathbf{R}$.

Not the answer you're looking for? Browse other questions tagged estimation kalman-filters tracking visual-tracking position or ask your own question.