What's the interpretation/meaning of windowing function squared?
What does it mean visually?

As said by @robert bristow-johnson, a squared window is another window. If you take a quite standard type, symmetric, unimodal, positive (with the related question Conditions for symmetric and unimodal windows in both time and frequency domains) and peaking at $1$, like a Hamming window, you can see the following behavior: 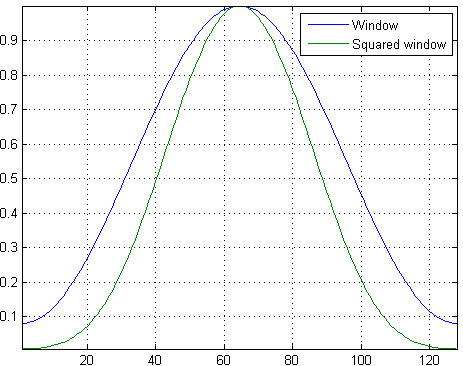 The squared one is below the original, due to the contractive effect of $t \to t^2$ in $[0,1]$ (in other words, $t^2\le t$), while keeping the same maximum location. So the window is better localized, and gets improved apodizing at the ends, which can be useful to reduce "blocking" artifacts at the edges of overlapped frames: if the original window ends at $0.1$, its squared version ends at $0.01$, a ten-fold reduction.

The other effect is that the new window is close to energy-normalized. Even if your "window" is zero-mean (like a wavelet), the energy of its square is never zero (unless the window is zero), so you can use it as a weighted average, of the shape (similar to equation 4): $$\frac{\sum a^2(k).x(k)}{\sum a^2(k)}\,.$$

i have been having a little argument with someone on comp.dsp about this. there is a term i hadn't seen before ("Princen-Bradley condition") which i think means the same as a "complementary-power" window. if the square of a complementary-power window is applied to an STFT system above with a null process, the output will be exactly the input when 50% overlap is used. but if the square of a complementary window (such as the Hann) is used, then, with 50% overlap you do not get perfect reconstruction. so the square-root of a Hann window would be a good candidate for a complementary-power window. and you would have to apply that window twice to the time-domain data to get perfect reconstruction.

Adding to Laurent's answer. I've plotted the magnitude of the FFTs of the two windows. I've padded the FFT to 1024 and the plot is shown in dB. Here's a regular plot: 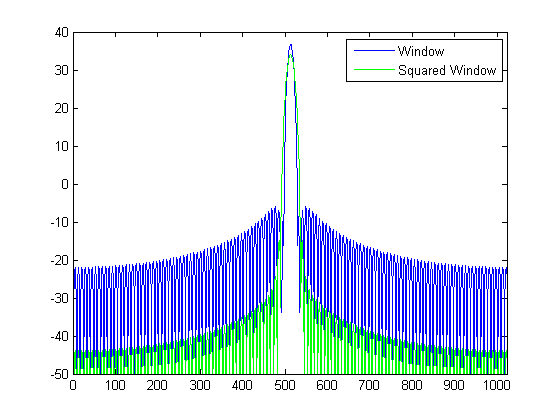 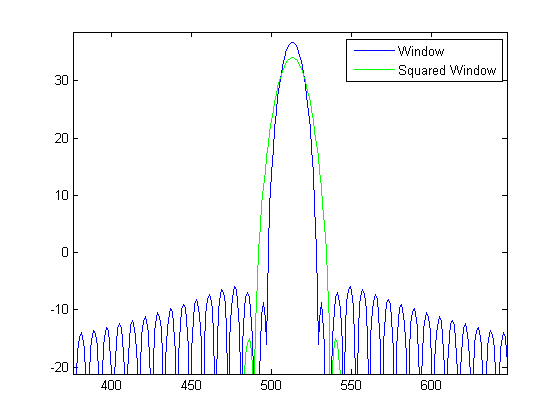 There effect of squaring the window is more obvious in the frequency domain. There is a loss in the coherent gain because more of the window coefficients are closer to zero. The main lobe widens because multiplication in time corresponds to convolution in frequency domain are this tends to spread the response. The sidelobes are lower and they decay faster - the rate of sidelobe decay is asymptotically proportional to the number of continuous derivatives of the time domain window - See Papoulis - "The Fourier Integral and its Applications".

It means that w(n) was applied both before the STFT and after the ISTFT.

w(n) is both an analysis window and a synthesis window. https://www.dsprelated.com/freebooks/sasp/Weighted_Overlap_Add.html

Typically w(n) will be chosen to be the square root of a COLA window, so that when squared and overlapped, it sums to unity and reproduces the original signal exactly with no ripple: https://www.dsprelated.com/freebooks/sasp/COLA_Examples.html

Not the answer you're looking for? Browse other questions tagged audio window-functions or ask your own question.

58
Algorithm(s) to mix audio signals without clipping
5
Why should one use windowing functions for FFT?
3
Working around FFT windowing?
0
Shape of Kaiser windowing function FFT response
7
Is spectral leakage due to windowing 'different' for the DTFT and DFT?
1
Filter, window function and audio signal: how to link them to each other?
1
Advantage of applying a Window Function in Analysis and Synthesis of STFT?