I have a random signal x of 1000 samples and I've to generate y1 by filtering x using an autoregressive (AR) filter of order n (let say 4). I've tried the following code to implement the autoregressive definition (As in Autoregressive model only the past values of the model output, and the present value of the model input are used)

The problem is that, I need to multiply the previous output y1 and current input x with a=0.1, otherwise it gives an unstable filter which leads to infinity. Please clarify which mistake I'm making while filtering x using AR filter or I'm doing it the wrong way?

Furthermore after doing this step, I need to find y2 by adding some amount of additive white gaussian noise (AWGN) in y1

and then using x and y2, I have to find the coefficients of my autoregressive filter using Yule Walker equation for order 4. I've tried this

But it's not giving correct coefficients (or filter taps). Please somebody help me if there's something I'm missing in understanding the question fully or making some mistake somewhere in the code?

The problem is that I need to multiply the previous output y1 and current input x with a=0.1, otherwise it gives an unstable filter which leads to infinity. Please clarify which mistake I'm making while filtering x using AR filter or I'm doing it the wrong way?

The stability of the AR process can be determined from the location of the poles of the transfer function. To find those poles, we start off with the recurrence equation of the AR(p) process:

From which the transfer function in the $z$-plane is: 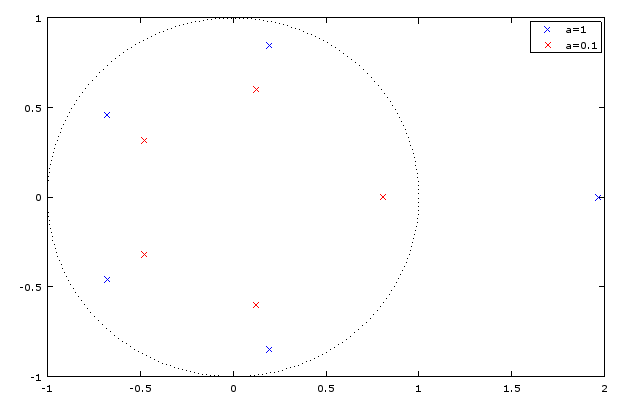 As you may notice, there is a pole near $z=2$ (more precisely at approximately 1.96595) when $a=1$ which indicates that the system is not stable. On the other hand, when $a=0.1$, all the poles are located inside the unit circle and the system is stable. Beware that even with $a=0.1$, starting with $p=11$, the system also has a pole outside the unit-circle and starts to be unstable.

In other words, there are no specific mistaking in your filtering code (ie. it correctly implements an unstable filter when a=1).

But its not giving correct coefficients (or filter taps). Please somebody help me if there's something I'm missing in understanding the question fully or making some mistake somewhere in the code?

There are indeed a few issues with that part of the code. Perhaps the most significant issue is that the solution

So you can construct the Yule Walker equation with:

So putting it all together, you should get something like this:

The solution of equation (2) can be constructed in a similar fashion as for equation (1). The main thing to note is that in this case the $\mathbf R$ matrix elements $c_0, \dots, c_{p-1}$ are not normalized by $c_0$ (which would have yielded $r_0, \dots, r_{p-1}$). In this case you may replace autocorr with xcorr, which returns a sum of product without normalization (you would then need some adjustment since is xcorr is double sided, meaning it contains 2*p-1 values, including the values for positive, zero and negative lags). This would give you the following:

Not the answer you're looking for? Browse other questions tagged matlab filters autoregressive-model or ask your own question.

3
Linear predictive model convolution
0
Different results for different orders of estimating AR model using Yule-Walker equations
2
Autoregressive modeling (linear prediction) of electrical transmission lines?
0
How to Estimate a Normalized PSD Using the Burg’s Method in MATLAB?
2
BER performance of a colored noise
0
How to characterize this whitening filter?
1
How to filter data with given numerator and denominator coefficients of an IIR Filter, in MATLAB Implementation