Does this lowpass filter have a noncausal impulse response?

I'm doing some measurements with my sound card, I have one output channel connected to one input channel.

I then send the sound card a unit impulse, i.e. a signal 1 value followed by zeros.

The recorded response is shown below.

I know that the Fourier transform of a Rect function, or LPF, will result in a Sinc function - which is what the response below seems to be. But I'm not quite sure as to the reason for the pre-ringing in the response. 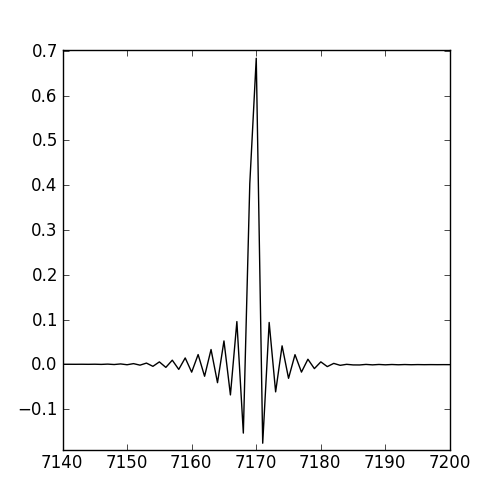 Somewhere in the chain between the sound card analog input and the samples that you're plotting, there is certainly a lowpass filter. There is likely an analog anti-aliasing filter before the ADC; in addition, there are likely one or more lowpass filters applied during resampling processes either on the card or in the operating system's audio driver stack (resulting in a stream of samples at the sample rate that you requested).

As you noted, lowpass filters often have an impulse response that resembles a $\text{sinc}$ function. When you excite a linear system with an impulse, the resulting output is just a copy of the system's impulse response (due to the convolution theorem). So, the fact that the observed signal looks like a $\text{sinc}$ function is to be expected. It doesn't sound like this surprised you, either.

However: you did not observe noncausal behavior. If you had, then you should have run immediately to your local patent office. Noncausal systems are not realizable in the real world. Remember the definition: in order for a system's response to be noncausal, its output must lead the input in time. Stated differently, the filter would start outputting its response to the input before you put the input in. Obviously, that's not going to happen.

So what's with the pre-ringing? Simple: the large spike in the middle corresponds to the center of the filter's impulse response. However, that spike does not correspond to $t=0$, the time at which the impulse was inserted into the filter. Consider the following MATLAB example: 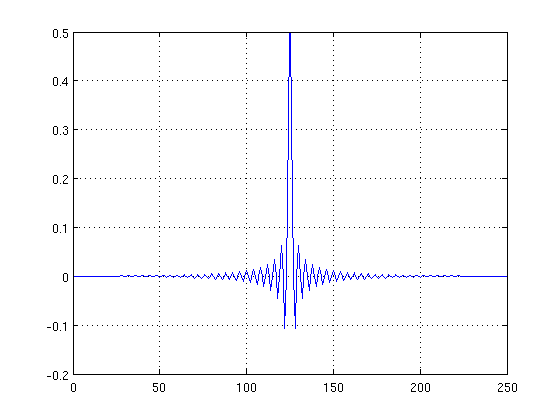 As you can see, the peak in the plot is not at sample index zero. The filter has an overall delay of 125 samples (indeed, all linear-phase FIR filters have a bulk delay of $\frac{N}{2}$ samples, where $N$ is the filter order), and the pre- and post-ringing are centered about that delay. So, when you insert the impulse, you initially see very little response. As the impulse makes its way through the filter taps, the ringing ramps up to a peak at the impulse response's center, then ramps back down to zero.

The takeaway: There is no noncausal behavior in the example you gave. It is possible to simulate noncausal filters in practice by adding enough delay, similar to the delay shown in the lowpass filter's impulse response above.