Which image for DoG filter?

I am studying computer vision and have some trouble with difference of Gaussian filter.

We apply Gaussian filters with different values of sigma on original image then subtracting from them.

However, Gaussian filter blurs image, so some edge might not be identified.

Why could we use DoG? An old and low-cost edge-enhancement technique consists in subtracting a blurred image from the original image. Its filter interpretation is an impulse filter (the neutral filter for the original image) minus the blur filter. The resulting filter is positive at its center, and negative around, a sort of coarse Laplacian filter.

The above impulse filter can be seen as the limit of a Gaussian filter whose $\sigma$ tends to $0$.

How effective is DoG? its effectiveness is close to that of the Laplacian of Gaussians, which it mimics, see below in 1D. 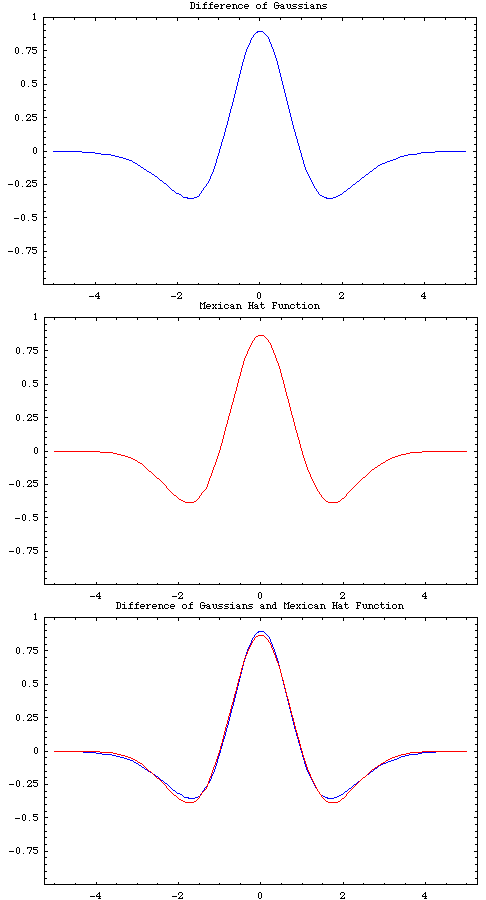 Which type of images work best for this filter? It is believed to work well for large images, since it has very fast implementations. Due to the "double filtering effect" in high frequencies, it is somewhat robust to noise. Depending on the kernel size choice, it enhances features that possess a certain scale extend.

Not the answer you're looking for? Browse other questions tagged image difference-of-gaussians or ask your own question.

0
Image with specific frequencies
3
How to filter noise from continuous path in image
5
How to improve an FFT AM demodulator for NOAA APT satellite imagery?
10
Removing Noise from Dental Radiography
2
How do I scale Gaussians for Edge detection
3
Strong (0,0) pixel among an otherwise normal cross correlation peak
5
How to Remove Temporal and Fixed Pattern Noise and Apply Tone Mapping?
5
Filter Artifacts from Periodic Filtering