Today I was talking to my collegue about clipping and he said that clipping produces harmonics in frequency domain as he showed me the clipped signal frequency response.

However when I asked him why does that happen, he couldn't answer. I did some googling and still not able to see why it is so.

This Link does mention about what we observed but didn't explain as to the reason why does it create harmonics? Does anyone know why it is so?

If you play a bit with the equations you'll see that the terms for $n=3,4,\ldots$ each introduces new harmonics. When the input is more complex, such as a sum of sine waves of different frequencies, the harmonics will be more interesting.

Another, maybe more intuitive way to see it is as follows. A clipped sine wave looks a bit like a square wave -- the more clipping there is, the more similar it is. It is natural, then, that its Fourier series will resemble that of a square wave, which has plenty of harmonics.

assuming there were no harmonics (frequency components other than the fundamental that are at integer multiples of the fundamental frequency) in the first place, that means the input to the clipping operation is a pure sine wave. a Fourier series analysis of that periodic sinusoid will show non-zero amplitude at only one frequency, the frequency of the sinusoid.

if the output of the clipping operation is something other than a sine wave (like a sine wave with either top or bottom peaks "clipped"), then it's a periodic waveform that is not a sine wave. then the Fourier series analysis will have to have other components than only that which was the original sinusoid.

It can be shown by the Stone-Weierstrass theorem that a power series representation approximates a non-linear system response to any desired precision if N is made sufficiently large. That is, consider a clipped signal $y(t)$ for input signal $x(t)$, then: $y(t) = \sum_{k=0}^{N}a_kx^{k}(t)$.

For more complicated signal variations, such as speech,: The spectral content varies with time. However, assuming slow temporal variation in spectral content, the above reasoning of harmonic introduction due to clipping will still hold. Further, the harmonic spacing will be time-varying and will be dependent on the short-term signal spectrum. Example see the plot below for a speech signal (normalized to lie between +1 and -1, and corresponding clipped signal at amplitude value of 0.3 and re-normalized to same dynamic range as $x(t)$). Below the time domain signal, the corresponding signal spectrograms are represented. As speech is composed of harmonics in voiced regions (such as vowels), the harmonics strength gets further boosted in the clipped signal in these regions. Also, the lower harmonics have more amplitude strength (more darker in the plot). In the unvoiced regions, the temporal variations are very fast and clipping does not introduce very strong harmonics. In other words, in general, introduction of harmonics is dependent on the spectral content of $x(t)$. The harmonics are introduced for sure if $x(t)$ is a periodic signal. 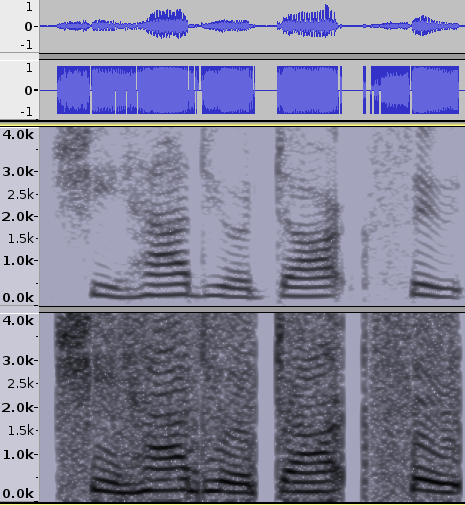 I learned decades ago in electrical engineering classes that the Frenchman, Joseph Fourier, realized that any periodic waveform can be represented by an infinite sum of sines and/or cosines.

For a clipped sinusoidal waveform, all the even harmonics are zero because of the symmetry across the horizontal axis, except for the phase (or time) shift. The coefficients for the Fourier series for a clipped sinusoid can be calculated by integration. (See Fourier Series in wikipedia, on other websites, or in electrical engineering textbooks on signals and linear systems.) Once the Fourier coefficients are known for the fundamental (index $n=1$), and at the harmonics at $3$ times ($n=3$), $5$ times ($n=5$), and $7$ times ($n=7$) the fundamental, a graph of the sum of these sinusoids will very closely match the clipped sinusoidal waveform demonstrating that Fourier was right.

A practical simple way to see the appearance of harmonics is reproduced in the MATLAB code below. A simple sine/cosine wave, x, can be represented by a single harmonic, see X in the figure. If this wave is amplified and clipped, y, more harmonics will be needed to represent the clipped version, see Y. 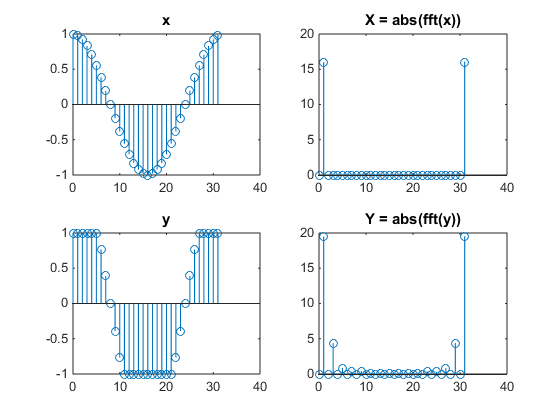 Not the answer you're looking for? Browse other questions tagged audio frequency-spectrum frequency-domain or ask your own question.

59
Algorithm(s) to mix audio signals without clipping
19
Why does spectral leakage arise in an FFT?
1
Why these harmonics always present?
0
resolving clipping audio issues
0
How to fix audio clipping in Adobe Audition?
0
How to represent ratio between harmonics in audio spectrum
2
Implementing a pitch shifter
0
Where do harmonics come from?