How frequency response related to a transfer function

Can anyone explain how frequency response related to a transfer function?

A discrete-time linear time-invariant (LTI) system is defined by its impulse response, which can be expressed as a list of non-zero coefficients $c_n$ occuring at integer time indices $t_n$. To form its output $y[k]$ all the system can do is sum time-shifted and constant-multiplied copies of its input $x[k]$. An important class of input functions are complex exponentials that look for example like this: 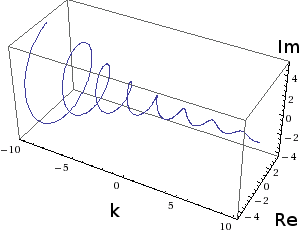 These definitions can also be extended to non-linear systems but that is beyond my experience.