The BER is the average number of errors that would occur in a sequence of $n$ bits. When $n = 1$, we can think of the BER as the probability that any given bit will be received in error. Basically, it lies between 0 and 1 --

When we measure the performance of a digital communication system with and without equalization, with that of the theoretical BER for a particular kind of modulation, we prefer the simulation to be exact match with the theoretical. My Questions are :

(1) Is theoretical BER the upper or lower performance bound?

(4) What can be said about performance of the system with and without equalizer if the simulated BER is above the theoretical?

(5) Does an equalizer essentially help to improve the BER? By improving -how much improvement is desired? Tradeoff? Do we wish the simulated curve to be an exact match to the theoretical and then say that the equalizer is functioning properly in removing intersymbol interference and noise? 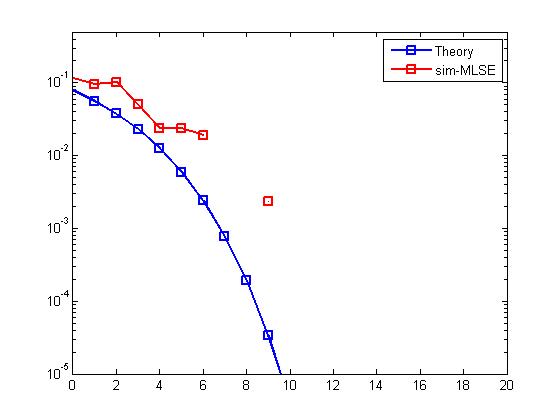 What is the interpretation for the bit error performance?

Note: usually, the "theoretical BER" is called $P(e)$, the probability of bit error (sometimes with other symbols, like $P_b$). A rate implies experiment; the probability implies theory.

1) $P(e)$ is a lower bound for the BER: since practice is messier than theory, the BER will be higher than $P(e)$ (assuming the theory is correct; that is, that it models reality properly).

2) I'm not sure I understand the question. We always want $P(e)$ to be as low as possible, but it is ultimately bounded by the channel capacity.

3) If by "below the theoretical" you mean "better than $P(e)$", I'd say something is wrong with your simulation or your assumptions.

Not the answer you're looking for? Browse other questions tagged modulation self-study or ask your own question.