Why not use zero-signal in digital transmission?

This is something that bothers me from time to time and has always been hand-waved away with some plausible but non-rigorous explanation. For clarity, consider the QPSK case where we have the constellation points $(0,1), (1,0),(-1,0),(0,-1)$. What is the fundamental flaw in using the origin, and then three equidistant points separated by $\frac{2\pi}{3}$ radians? We would have the same minimum distance but with smaller average energy.

I understand the added annoyance in synchronization and differentiating between "no message" and "the zero message". But these should be solvable with preambles and whatnot. I'm curious about the flaws that are more than just annoyances, the ones that makes this constellation a fundamentally bad idea.

EDIT: I spoke without thinking, clearly the minimum distance would not be the same, it would be one in the zero-signal case and $\sqrt{2}$ in the standard case. The number of pairs at min. distance would be... uh... six...?

As a complement to Deve's nice answer:

In QPSK each symbol has two neighbors, while in the proposed constellation each symbol has only one neighbor. However, the quasi-exponential nature of the $Q$ function means that the distance is the most important consideration to evaluate the probability of error. This means that, as Deve shows, the proposed constellation will perform worse than QPSK.

All implementation aspects aside, the constellation you propose performs worse than QPSK in an additve white gaussian noise (AWGN) channel.

I claim this based on simulations that I have run with Matlab calculating the symbol error rate (SER) as a function of signal-to-noise ratio (SNR). Here is the result: 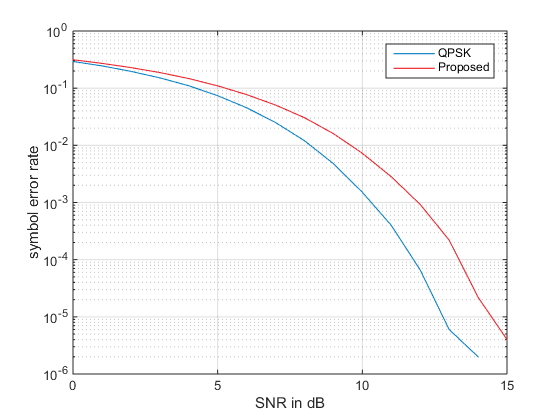 As you can see, for a given SNR, the proposed constellation has an higher SER than a QPSK constellation. Additionally, I expect the proposed scheme to perform even worse in terms of bit error rate (BER) as -- in contrast to QPSK -- Gray labelling is not possible. Some details concerning the simulation:

It might well be that I made a mistake writing the simulation script, so I uploaded it in case you would like to check my implementation.

This might not be the mathematically rigorous explanation that you have been hoping for. To answer your question theoretically, one would have to calculate the SER analytically. For that, one should first find the decision thresholds, which is the main problem (for me, at least). It's far from obvious, what the optimal decision thresholds would be. They are not straight lines as with QAM constellations but probably a kind of zero-centered disc with three "rays" emerging from its center. Calculation of the SER should probably involve a transformation of the problem to polar coordinates.

With that kind of irregular constellation it also doesn't help much to compare the minimum distance, i.e. the length of a straight line between two given constellation points. It's true, that for a given mean signal energy, the outer points of the proposed contellation have greater distance to the inner point than any two points of the QPSK constellation. However, the inner point of the proposed contellation is surrounded by three other points which decreases its decision area and consequently increases the symbol error probability for that point. It's not obvious what is better. According to the simulation, QPSK is better.

The areas of the maximum likelihood decision can also be simulated. In the following image, each color corresponds to a distinct, decided symbol. The input to the decision device is a very noisy (0 dB SNR) signal with the proposed constellation. 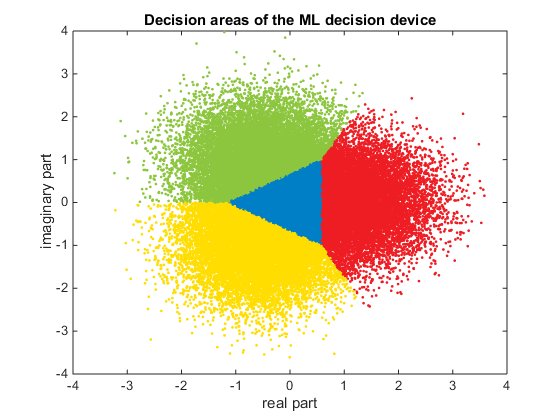 We can clearly see how the inner point is "squeezed" between the outer points. In my opinion, that is the reason why the proposed constellation performs worse than QPSK. Now that I see this plot, I find the SER calculation not so difficult anymore. With a little time it could be done.

Not the answer you're looking for? Browse other questions tagged digital-communications modulation or ask your own question.

1
Why do digital modulation when the signal entering the channel is analog?
1
Digital Downconversion of Signal
0
Why is the received signal=information+RF signal+noise,not just information+noise?
0
help with bandwidth diagrams for digital transmission
2
Use of pulse shaping in digital modulation
0
Why Bluetooth 2 use pi/4-DQPSK instead of OQPSK?