Number of samples in one period of subcarrier after IFFT

I have a quick question about the number of samples in one period of a sub carrier in OFDM systems. The IFFT process generates N-parallel sub carriers in discrete time domain which are sent simultaneously over the sub carrier frequencies.

What is the number of samples in one period of a sub carrier after IFFT?

Thanks for your reply. Let me give you more details about my query with an illustration as below. The picture shows the sub carriers as analog but lets take them as discrete before DAC and CP addition. The system has 4 sub carriers and hence they have different frequencies. My questions is here at this point; again assuming they are just the output of the IFFT and digital- Does each sub carrier has 4 samples in every cycle? So lets say the duration of OFDM symbol is T seconds. The subcarrier1 has 1 cycle and I am visualizing that the sub carrier has 4 samples during the T seconds. Subcarrier2 has 2 cycles (period) and hence it has 2x4=8 samples during the OFDM T seonds. And for subcarrier3 it has 3x4=12 samples. For subcarrier4, there are 4x4=16 samples during the OFDM symbol (T seconds length).

And in total, the OFDM symbol has 36 samples in the symbol length T seconds.

Am I correct interpreting this? 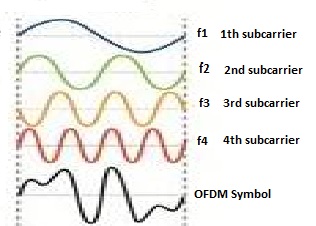 If you'd like to think analog, an OFDM signal can be written as a sum of weighted complex sinusoidals: $$ x(t)=\sum_{k=0}^{N-1}X_k \exp{\left( \mathrm j 2\pi\frac{kf_\mathrm{s}}{N}t \tag{1}\right)}, $$ where $N$ is the number of subcarriers, $f_\mathrm{s}$ is the sampling frequency and $X_k$ denotes the subcarrier values. For a digital implementation, (1) is sampled at $t=n/f_\mathrm{s}$: $$ x(n/f_\mathrm{s})=\sum_{k=0}^{N-1}X_k \exp{\left( \mathrm j 2\pi\frac{kn}{N} \tag{2}\right)}, $$ which corresponds to the inverse discrete Fourier transform (IDFT), implemented by an IFFT. The IFFT has $N$ input values and $N$ output values. That's ok, because the IDFT is N-periodic and thus any additional sample would be redundant. Consequently, every subcarrier in (1) is represented by $N$ samples, regardless of its number of periods during the OFDM symbol length.

If you try to imagine the digital OFDM time domain signal as a superposition of $N$ sampled sinusoidals, the figure you posted has two problems, in my opinion:

Please consider the following figure that I have created instead 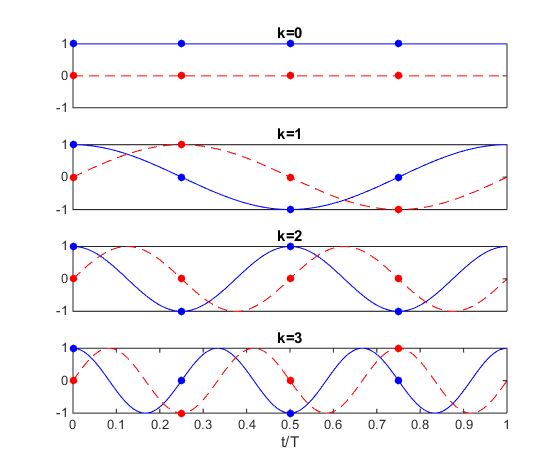 It contains the subcarriers from $k=0$ to $k=3$ (lines) and their samples (dots). It also shows the real part (blue) and imaginary part (red). Now consider the red line in the first and the third subfigure: their samples are exactly the same. However, the blue (imaginary) part is different. That is, $N=4$ samples are sufficient here to represent all subcarriers.

Here is the Matlab code I used to create the above figure:

You need as many samples as you have subcarriers. If you have 64 carriers, then you need 64 samples.

Not the answer you're looking for? Browse other questions tagged ofdm ifft or ask your own question.

0
IFFT and OFDM upconversion
0
A General Question regarding OFDM symbol
1
OFDM sensitivity to sampling time offset (with half of time interval between samples)
1
doesn't OFDM inherently deals with ISI? why cyclic prefix is needed?
0
OFDM RF signal waveform
0
OFDM IFFT/FFT processing
0
Do the effects of OFDM pilot tones spacing appear in time or in frequency domain?