Design of equalizer for wireless communication

I am having difficulty in trying to understand the working mechanism of an equalizer. Please correct me where wrong.

Mechanism of an Equalizer - The purpose of an equalizer is to reduce intersymbol interference due to noise and fading effect. A linear equalizer is a filter that can undo these channel effects. When the channel coefficients $w$ are unknown, we perform blind equalization. In this scenario, we first estimate $w$ and then apply an equalizer.

The output of an equalizer is a delayed version of the transmitted signal. This is what I do not understand. We need to find what is the input to the system, but the transmitted signal is not the input. What I mean to say, let the channel model be a single input, single output moving average of order 2, MA(2): $y(n) = a_1*x(n-1) + a_2*x(n-2) + x(n) + \eta(n)$ where $x$ is the input data (unknown) and $\eta$ is an additive zero mean white Gaussian measurement noise; $n$ is the sample, $*$ is multiplication of the coefficient with the data. If I do, out_eq = conv(w,y) (In Matlab) where $w$ are the estimates and $y$ is the received signal that is transmitted, then how come the input $x$ is obtained through this operation? Another way is not to use conv() and use an FIR filter because I read that linear equalizers are FIR filter. I can understand the part where we do $out_eq = y./w' = x$ but how is this similar to the convolution or using FIR filter?

Why Equalizers are linear filter? - posted as a new Question

Suggestion on what equalizer I should use for my case- I have a Rayleigh fading channel that is modeled as FIR filter. Let the impulse response / channel be $h$. Then the transmitted signal $tx(n) = h.*x(n) + AWGN$. I wish to apply Expectation Maximization and Kalman filter to estimate the $h$. Then, how do I equalize and which equalizer to apply and why?

Chapter 4 defines blind linear equalization for Single input single output (SISO). Suppose that $u[n]$ is the source signal of interest and is distroted by SIS LTI system $h[n]$ via the data model:

$y[n] = x[n] + w[n]$ where $x[n] = h[n]*u[n]$ is the noise free signal and $w[n]$ is the additive measurement noise. The goal of designing an equalizer $v[n]$ is such that the output of the equalizer given by $e[n] = v[n]*y[n]$ approximates $u[n]$ as well as possible. $e[n]$ is called the equalized signal. The book says that we can do blind equalization through the following steps (a) estimation of $h[n]$ by means of blind system identification algorithm (b) design of a non-blind equalizer with these estimated parameters for the retreival of $u[n]$.

Confusion on Terminology problem and mechanism : I was under the impression that the output of the equalizer is the source input to the system, as in case of an ideal equalizer we perform the operation out_equalizer = received_signal./channel_coefficients = h[n]*u[n] = y./hand looking at this equation, out_equalizer = u.

In other cases when we Constant Modulus ALgorithm, we use convolution or the FIR filter as

PART (2) - Choosing an equalizer for my case

If the Rayleigh fading channel is a one tap FIR filter, then the ideal equalizer (dividing the recieved signal by estimated $h$) would work fine, based on your answer.

But , if it is an $m$ tap filter, then I should resort to some other techniques as you have said. Would another FIR filter as an equalizer be applicable? I know of Zero-forcing, MMSE techniques but was thinking of using the linear filter as most books say that equalizers are mostly FIR filters.

Ok, there is some misconceptions in your question. I strongly recommend you to read a little more about the topics, but I will try to help you a little. My answers and some comments:

...linear equalizer is a filter that can undo these channel effects. When the channel coefficients w are unknown, we perform blind equalization. In this scenario, we first estimate w and then apply an equalizer.

You can only use the equation outeq = y./w′ if you have a flat channel. If your channel is not flat, this equation will not work. A flat channel is a channel that only has a multiplicative effect in the transmitted signal. Imagine that you will perform a convolution, but the filter that represents your channel has only one coefficient. That's why you can just divide things in the receiver to perform equalization. But be careful, if you are not using OFDM (a robust technique against frequency selective channels) or if your channel has more than one coefficient, your channel will not be flat (it is more complex than this, but it is the main idea).

Then, how do I equalize and which equalizer to apply and why?

There are a lot of ways of doing that. I suggest you to start from the basic. Read a little about Zero Forcing equalizers, MSE equalizers and Maximum Likelihood Sequence Estimation. without more details, it is difficult to tell you which one to use. What you want to achieve? What is your goal? Each one has its advantages and disadvantages. Read a little bit about them and you will be able to determine which one you need.

Look at the figure to understand better: 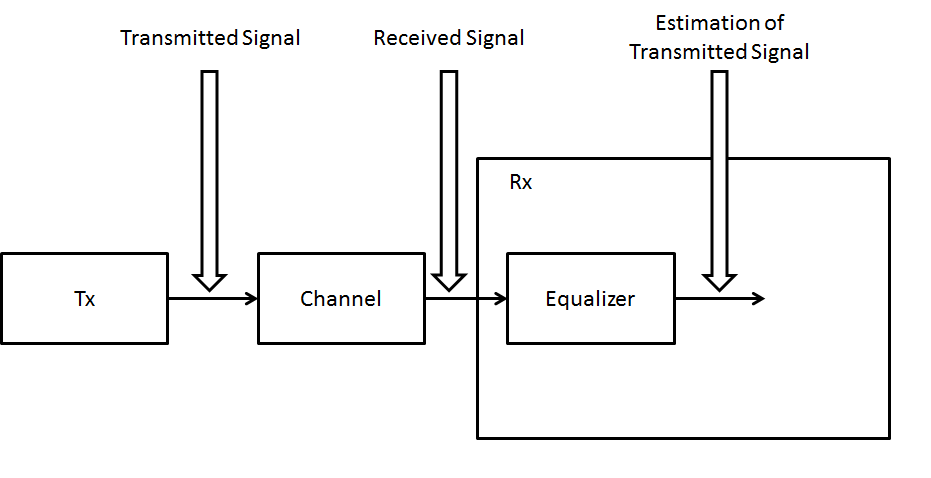 When you project an equalizer, you want the output of you equalizer to be an estimation of the input of your channel, that in the figure I called the transmitted signal.

But , if it is an m tap filter, then I should resort to some other techniques as you have said. Would another FIR filter as an equalizer be applicable? I know of Zero-forcing, MMSE techniques but was thinking of using the linear filter as most books say that equalizers are mostly FIR filters.

But ZF and MMSE equalization are techniques to find the taps of a linear FIR filter with as many taps as you want. Once you have found the taps through one of this techniques, you can just use

You use the ZF and MMSE to find the equalizer_coefficients. Once you have it, you just need to perform the filtering. The only problem is that these techniques are not blind techniques because they use training sequences to find the taps. If you want a blind technique, you can search for CMA equalization, for example, but the technique that you should use will depend directly of the nature of your signal. Is a modulated signal? What kind of modulation you have?

You said that you are using Kalman Filter and expectation to estimate your channel impulse response. Once you have it, you can easily use the ZF technique to find the equalizer coefficients, for example. And your equalizer surely will be a linear FIR filter.

Let me know if I could make it more clear.

4
Adaptive equalizer for IIR channel?
2
Help in deriving the update rule for equalizer
0
Matlab: Help in understanding if the example for Maximum Likelihood Equalizer is properly functioning
6
Why are equalizers moving average model (FIR)
0
Equalizer coefficients and channel coefficients
0
Coefficients of a Zero Forcing linear equalizer for infinite length input