Significance of energy and power signals in real world

In signals and systems subject we study about calculating energy and power of a signal, but what is their practical significance.

Also what is the significance of a signal which is neither energy nor power signal ?

I mostly agree with @PeterK.'s answer; in practical terms, all signals are energy signals. However, a signal's energy does have important practical significance. Producing a signal of a given energy consumes at least that same amount of energy, for which you have to pay. In a battery-operated device, this becomes very important, because batteries store energy.

If you're using a signal to communicate, then the more energy it has, the farther it will reach (I'm oversimplifying a bit, but in general this is true). The more energy a signal has when it is received, the easier it is for the receiver to recover the information in the signal without (or with few) errors.

This question over on Electronics.SE has a nice image which also includes the discrete-time versions: 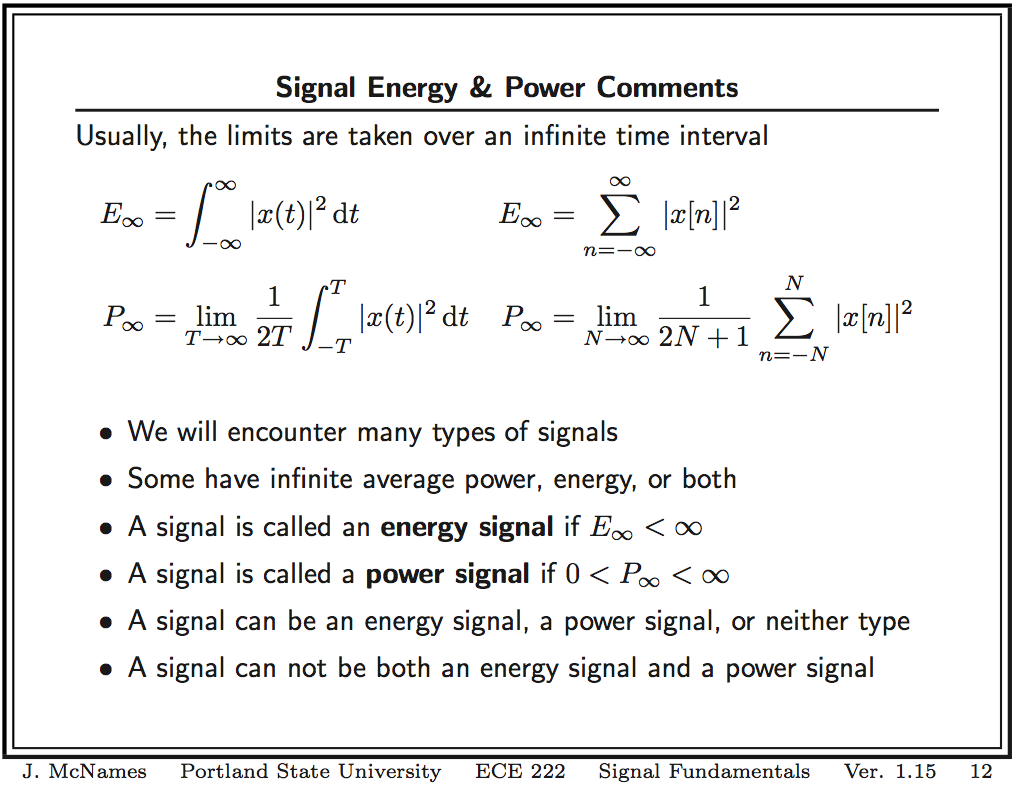 what is their practical significance.

There's no real practical significance: most real-world signals are finite duration (I'm still waiting to see an infinite duration one) and finite magnitude (my multimeter's scale doesn't reach to infinity).

The main significance is that it tells you what sort of mathematical tools you can use (or not).

Also what is the significance of a signal which is neither energy nor power signal ?

Well, such a signal would have infinite power (and also infinite energy).

The easiest example I can think of is the exponential: $$ x(t) = e^t $$ which is easy to express, but has infinite power.

More generally, non-Energy, non-Power signals will be those that are infinite in extent (they don't drop to zero) and that continue increasing with time.

Energy can be a genuine motivation for real systems, when actual power is used. As said before by @Peter K. and @MBaz, in signal processing, most practical signals are time-limited, and thus energy-signals. But we use energy because this is almost the only quantity for which we can solve stuff efficiently.

In signal processing (and other domains as well), several tools will be implemented as computer algorithms, and the energetic motivation is often gently fraudulent. It masks a question of theory and computation.

Let us take a classical case. I compute an average (mean, $\hat{m}$) of grades for my students. This indicator is so standard and convenient: easy to compute, linear, sum-preserving. Yet, mean arises from the optimal energetic solution to the minimum point between a sum of squared differences (based on the $\ell_2$ norm): $$ \hat{m} = \arg \min \sum_k (x_k-m)^2$$ In practice, should we care about the energy of a grade difference? Is it related related to the energy a student invests in learning?

To judge a student with one single measurement, we could as well wish students to have regularity in their work, and low variations between their grades. A midrange estimator ($\ell_\infty$ norm) would be fine for that: $m_\mathrm{mr} = \frac{1}{2}(x_\min +x_\max)$. Or allow the student a minority of failures, for which the median ($\ell_1$ norm) could be convenient: $m_\mathrm{md} = \mathrm{median} x_k$.

In general, to summarize a series of observations we can find many "central tendencies" that could highlight the observations' behavior. This takes one real choice: put in equations what you really want to see, to compare, thus to measure. In many cases we do not know. In few cases we know, but it is intractable. I like student with open eyes, asking good questions, able to do brain work. In the end, I grade them from average answers to questions, which I do in the most subjective way to promote the above behaviors.

To me, in most cases in signal processing, we minimize energies, since the function $x\to x^2$ is convex, admits a single extremum that we can compute efficiently through derivation and linear system solving. We know how to solve the latter since decades (Gauss-Seidel or Liebmann method). Just like the average, linear time-invariant systems are derived from energy, and yield Fourier methods (orthogonal, thus energy preserving) as invariants. Optimal quantization, filter design, Wiener filtering, second-order stationary properties, Heisenberg-Pauli inequality and Gaussians, most standard SP tools are energy minimizers, because these were the only ones, with common sense, that we could get painlessly for a long time in any dimension. Median and midrange in 1D require sorting. Think about what would be the median of a 2D signal? Of course, there exists designs to compute optima with other penalties, but they are uncommon, as long as they are complicated to compute.

Luckily, since about 10-15 years, people have proposed novel toolboxes of tools to account for more involved penalties: other norms or distance, quasi-norms, non-convex terms, sums of the above (lasso, ridge, total variation). They are now solved with iterative algorithms. Penalized least-squares, proximal algorithms, to give a few.

With great power (of two) comes great responsibility. We still have to weight these penalties with hyper-parameters, sometimes difficult to infer, we still have to ensure convergence, we should implement them cleverly to get solutions in practical time.

So non power- or non-energy signals might soon become more important, as we now have tools to deal with them. We do not have to pretend using energy, as long as these tools provide sensibly better results.

Not the answer you're looking for? Browse other questions tagged signal-power or ask your own question.